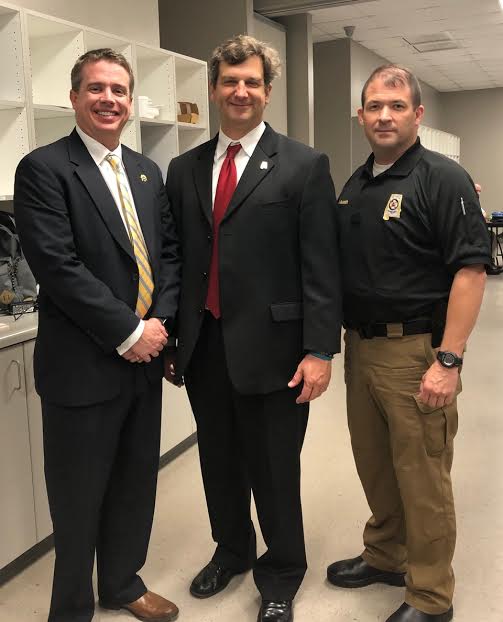 After investigating a traffic crash that involves a fatality, a law enforcement officer’s job isn’t done when he writes up a report. Oftentimes, it means consoling a grieving family. And if the fatal crash results in criminal charges against one of the drivers involved, the investigating officer could eventually find himself in court, providing evidence and testimony about the circumstances of the crash.

Working with these officers are prosecutors from district attorneys’ offices, whose job is to ensure justice for the victims and to hold those responsible for the deaths accountable for their actions. That starts by making sure the officers are well prepared.

“It’s not easy to determine if ‘this’ is an accident or a criminal occurrence,” Covington County District Attorney Walt Merrell said. “There is always pressure by surviving family to arrest, but sometimes accidents happen.”

Merrell and Bill Lindsey, traffic safety resource prosecutor for the Office of Prosecution Services, presented a class on traffic homicide law and courtroom preparation to 48 law enforcement officers Thursday in Montgomery for the Alabama State Troopers Traffic Homicide Division. The officers came from police departments, sheriff’s offices and State Trooper posts all across the state.

“Training like this helps ensure that officers have the information they need to properly investigate traffic homicides,” Merrell said. “I’ve always taken traffic homicide cases very seriously. Death is irrevocable, and if justice demands such, we must prosecute howsoever it is appropriate.”

The class was hosted by the Alabama State Troopers. Merrell and Lindsey were invited to lead discussions about state law as it pertains to traffic homicides, evidence presentation and courtroom protocols.

Sgt. Jeremy Baker heads the Alabama State Troopers’ Traffic Homicide Investigations Division. He said the division tries to hold such classes once or twice a year. The “at-scene,” or level one class, is nationally recognized and is a requirement for troopers, police officers and sheriff’s deputies who are pursuing an advanced certification in traffic accident investigation. “It’s the first step toward certification as a traffic crash reconstructor,” he said.

Even if they don’t go on to be certified as an expert in crash reconstruction, all the participants in Thursday’s class will put to use what they learned, Baker said. “They all will testify in court,” he pointed out.

This isn’t the first time Merrell and Lindsey have worked together in the classroom. “This is the first time we have taught this particular class together, but we have done other classes for law enforcement,” Lindsey said.

“In this class, we pretty much cover everything related to traffic homicide law. This includes going over the basics of traffic homicide law and preparing the officers for court, such as tips on giving testimony, getting materials together and answering questions on the witness stand.”

Some State Troopers say the worst part of their job is making a death notification after a traffic fatality – knocking on a door, sometimes late at night, to tell a family that a loved one isn’t coming home. Law enforcement officers and prosecutors would love to see the need for such notifications reduced. They regularly talk to schools and community groups about the dangers of unsafe driving, such as speeding, texting while driving, driving under the influence of drugs or alcohol, and not wearing seat belts.

But they know the calls to respond to fatal crashes inevitably will come. They just hope for fewer of them.

“Through the years, I’ve made it a habit to personally visit the scene of most every traffic homicide in Covington County,” he said. “I’ve prosecuted more of these cases than I care to recall, and, unfortunately, I’m sure I’ll prosecute more, too.”

Despite C on report card, OHS principal says they…