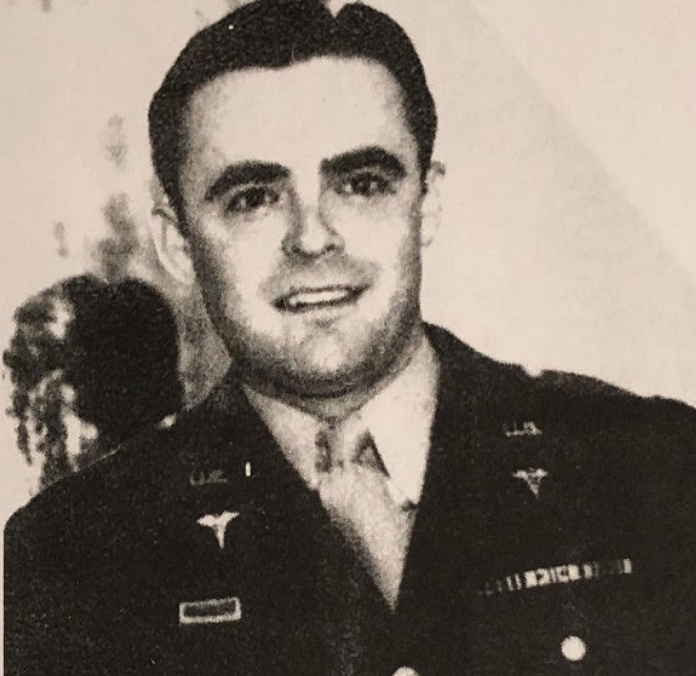 In February 1946, Captain William Gary Cumbie returned to the United States after serving in the China-Burma-India theater of World War II with the 5307th Composite Unit (Provisional), also known as Merrill’s Marauders, named after their commander, General Frank Merrill.

He was born August 6, 1916 in Morris, Georgia and died in Andalusia on September 10, 1987.  At about age 12, following the death of his father, James Lewis Cumbie, he moved to Troy, Alabama with his mother, Emma Gary Cumbie, sister, Betty, and brother, Frank.  After graduating from Troy High School in 1935, he enrolled at the University of Alabama for premedical studies.  In 1938, following graduation, he started medical school at the University of Alabama, which at that time only included the first two years of medical training. The last two years were completed at Tulane medical school in New Orleans.

Gary Cumbie’s military journey began shortly after completing medical school and internship at Charity Hospital. After joining the US Army, he was sent to several military bases in the US, including Camp Barkeley Texas, Camp Polk, Louisiana, Fort Lewis, Washington and Fort Meade, Maryland.  From Fort Meade, he was sent overseas.  Preparing for departure from the US, he wrote to his mother and sister, “I’m not allowed to tell where I’ve been, where I am, nor where I’m going.” A follow up letter, several weeks later, said “I’m somewhere in Burma” where he had joined the 5307th Composite Unit and was assigned to a Surgical Portable Hospital.

“The Burma Campaign was a series of battles fought in the British colony of Burma…primarily involving the forces of the British Empire and China, with support from the United States, against the invading forces of Imperial Japan…Merrill’s Marauders…was a United States Army long range penetration special operations jungle warfare unit…famous for its deep penetration missions behind Japanese lines, often engaging Japanese forces superior in number.”

In a later letter, Gary said “the situation changes so rapid that one never knows today where he may be assigned tomorrow.” At end of the same letter, he also wrote “some patients are now coming in (by Ox Cart) and I must get back to work. We can usually tell when to prepare for work by the shooting off in the distance. The sound of those guns are terrific, particularly at night, and the people back home will never appreciate what those boys on the front lines have endured.” History, and Andalusia’s honor of our veterans, clearly indicates his concern, about people back home not appreciating what those boys endured, was wrong.

The Marauders last mission was the retaking of a major Japanese base at the town of Myitkyina. “In their final mission, the Marauders suffered 272 killed, 955 wounded and 980 evacuated for illness and disease; some later died from cerebral malaria, amoebic dysentery, and/or scrub typhus…After reinforcement  by an airlanded Chinese army division, the town finally fell to the Allies on 3 August 1944.”

“A week after the town of Myitkyina fell, on 10 August 1944, the 5307th was disbanded with a final total of 130 combat effective officers and men (out of the original 2,997). Of the 2,750 that entered Burma, only two were left alive who had never been hospitalized with wounds or major illness.”

In the jungles of Burma, Gary Cumbie also became ill with typhus. After being evacuated by mule he was flown to a military station hospital in Assam, India where hospitalized for about 3 months. After recovering, he resumed providing medical care at a field hospital in Burma. His last assignment before returning to the United States was at the 100th Station Hospital in New Delhi, India.

On August 15, 1945 (date of Japanese surrender), he wrote to his mother, “Well, it seems that it is all over but the shouting – speaking of the war. It is almost unbelievable and quite a surprise to all of us over here. Somehow it’s hard to relax and feel happy when one thinks of the sacrifices so many have paid.”

(information in quotations, not attributed to a specific person, is from “Merrill’s Marauders”, Wikipedia, Wikipedia Foundation, 22 September 2019, https://www.wikipedia.org/)

Flomaton defeats Opp in First Round