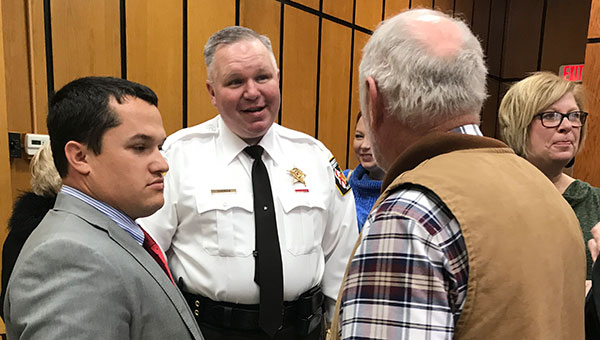 Covington County Sheriff Blake Turman on Wednesday approached the county commission inquiring if he could spend $130,000 in upgrades to the sheriff’s department.

The first thing the sheriff asked to spend on was $30,000 on new firearms for the department.

Turman plans to take the older shotguns and rifles and assess what they can use them for.

“Some of them will be put over at the jail for less than lethal type of weaponry,” Turman said. “We may keep a few of them on hand and the rest we will offer on consignment or dispose of them.”

In the past, Turman said there have been a wide variety of firearms, but they want to consolidate it to one type of firearm.

“It will be easier to maintain those types of rifles and we will keep them all on the same platform,” Turman said. “That way, if there is some type of firefight, we will be able to exchange rounds with each other. Right now, if you were to get into a firefight with someone, you may have one officer carrying different types of firearms and there is no way of interchanging magazines. This will also put everybody in the same standard caliber.”

All of the money for the firearms would come out of the contingency fund.

“Whatever we fall short of for the year, I don’t have a problem digging into the discretionary funds,” Turman said. “Every officer will be assigned a firearm. The shotguns and rifles will go mainly to patrol. There may be a few left over that we can give to investigators. Whatever else comes along with it like magazines and holsters will be covered by our discretionary funds.”

The next item the sheriff brought up was a polygraph machine that would cost $8,000, which would be purchased out of his discretionary funds.

“At this time, anything south of Montgomery there are only two polygraph examiners that belong to the state,” Turman said. “One of them is about to retire and the other one has been reassigned somewhere. I will be able to use this polygraph for, of course, law enforcement purposes, but also to help screen applicants that come apply for jobs. For law enforcement purposes, a polygraph is a wonderful tool to help lead you in the right direction as far as your investigation goes.”

There is a polygraph machine in Covington County, but Turman said they do not have access to use it.

“Right now, I am unable to buy vehicles unless they are on state bid,” Turman said. “I would like for us to look into that to see if we can make an exception to that rule. There are some vehicles that I have located that are reliable and they come equipped with lights and sirens. The only thing they don’t have cages and radios, but we have that.”

$80,000 was already approved in the budget for vehicles and Turman said he would supplement $12,450 out of law enforcement funds for the vehicles. They are all 2017 or newer Dodge Chargers.

County commission chairman Greg White said that some of those purchases in the $130,000 total request are subject to the Alabama Bid Law.

“We want to review the bid law first to make sure that we don’t get him, or us, in trouble,” White said. “Then we are going to have to come back to give approval at the next meeting. He had given us information on that, but we didn’t have enough time to fully review it beforehand. Some of the purchases are within his budget, and we don’t need to micromanage what he purchases, but I am quite concerned about the bid laws.”