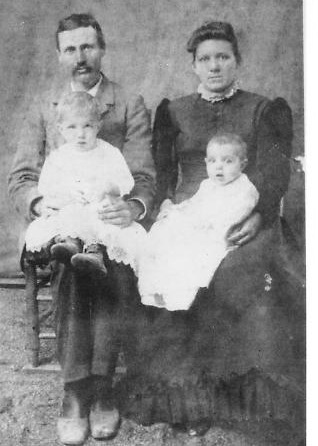 Today’s column will be a continuation of the Thames family review begun last week. Again, this narrative is made possible by Anna Mary (Jordan) Ellerbee making her family records available. She graciously gives credit to Willene Johnston Whatley of Conecuh County, Ala., for her vast research on this family including the early genealogy presented in last week’s column. Willene published her research in a book entitled Brooklyn & Johnstonville–Places in Time.

The story last week was concluded with a feature of the life of Cornelius Thames. Cornelius grew up in the Brooklyn community of Conecuh County, Ala., where he married and reared his family. At his death, he was buried in the local Brooklyn Baptist Church Cemetery.

Cornelius and Mary Elizabeth (Brantley) Thames were the parents of the following children:

Cemetery. Alexander Travis Thames served as a Justice of the Peace for

years in Brooklyn and was a notable leader in the Baptist Church. It has often been said that all Thames’ men were Baptists and Masons.

Both are buried in Brooklyn Baptist Church Cemetery.

3. James Joseph Thames was born Nov. 2, 1855, and died Nov. 10, 1942 in Red Level, Ala. He married Julia Mahalia Johnson and lived in the Red Level community of Covington County.

daughter of Elisha and Julia Annette (Purnell) Hart and died Dec. 15, 1908, after complications of childbirth in Citronelle, Mobile County, Ala. Jesse died at an early age while visiting his brother in Brooklyn where he had surgery for appendicitis on the kitchen table.

Cemetery. One of the children of Charles and Lucy (Thames) McLendon was Robert McLendon who married Louise Dean. Robert McLendon first operated an ice sales company beginning in 1927. He opened his first store in 1933, and he remained in the store business until his death. Everyone will remember

Brooklyn and McLendon’s Store at the intersection in Brooklyn for years to come.

Abigail Hart was the daughter of Elisha Hart and Julia Antoinette Purnell Hart. Elisha was born in Conecuh County in 1831 to Henry Hart and Mary Ann

Maxey Hart. Julia Antoinette Purnell was born in 1842 to Solomon Purnell and his second wife, Julia Antoinette Reid or Reed, in Americus, Sumter County, Ga. Julia Reid Purnell died in childbirth when baby Julia was born.  Solomon Purnell married a third time to Penelope Hardy, and she and Solomon moved to Conecuh County, Ala., for a while before he went on to Louisiana. His family stayed in Conecuh County. It is not known when or where Solomon died. Many of the current Purnells in Conecuh County are descendants of Solomon and Penelope Hardy Purnell.

Jesse Edward Thames and Mary Abigail Hart Thames soon had a daughter Addie Lee Thames born October 3, 1891, in Conecuh County. She married Charles Malachi “Mallie” Snowden born April 3, 1887 in Covington County. They married on January 23, 1911, in Vinegar Bend, Alabama. The Jesse E Thames family lived in Citronelle, Mobile County, Ala., for a few years around that time. His wife, Mary Abigail, died because of complications after childbirth on December 15, 1908. It was Addie Lee, the eldest daughter in the family, who helped her father rear the younger children, especially the baby, Mary, and the next daughter, Mattie Lou, who all were left without a mother. All of her siblings called Addie Lee “Sister” or “Big Sister.” At a recent funeral, a family member said she mentioned to someone recently a fact about “Aunt Sister,” and they said, “Aunt Sister; what an odd name.” But that is what the cousins called Addie Lee.

Jesse was a part-time preacher, and his name appears on several marriage licenses in Conecuh County as the minister who performed the marriage ceremony. He was listed as a bridge builder in the 1900 Federal Census in Choctaw County, Ala. It has been said that Mary Abigail cooked for sawmill workers as well as taking care of her own children and family when they lived in Choctaw County. The 1910 federal census lists him as a railroad foreman in Citronelle, Mobile County, Ala.

Jesse had a hard life in many ways. His first wife, Mary Abigail Hart Thames, died in childbirth in 1908. She was 42 years old, and they had been married for 19 years and had eight children. He was married a second time to Frances Leona Powell on June 18, 1910, in Citronelle, and she lived only three years after their marriage. She died November 2, 1913, and they had no children together. Then on Jan. 9, 1914, just two months after Leona died, Jesse himself died from complications of an appendectomy performed while he wasvisiting his brother, Alexander Travis Thames, in Brooklyn, Ala. He was only 47 years old.

Plans are to continue the coverage of this family in next week’s column. The source for today’s genealogy are the genealogical records of Anna Mary Jordan Ellerbee who may be contacted at annamarye@gmail.com by anyone who has additional information or who might questions. Again, she credits Willene Johnston Whatley of Conecuh County, Ala., for her vast research on this family including the early genealogy presented in last week’s column. Willene published her research in a book entitled Brooklyn & Johnstonville–Places in Time.

The Covington Historical Society will be meeting at 6:30 p.m., Thursday, November 21, at the Andalusia Area Chamber of Commerce Building. Members and encouraged to bring covered dishes for the meal, and guests are encouraged to attend.