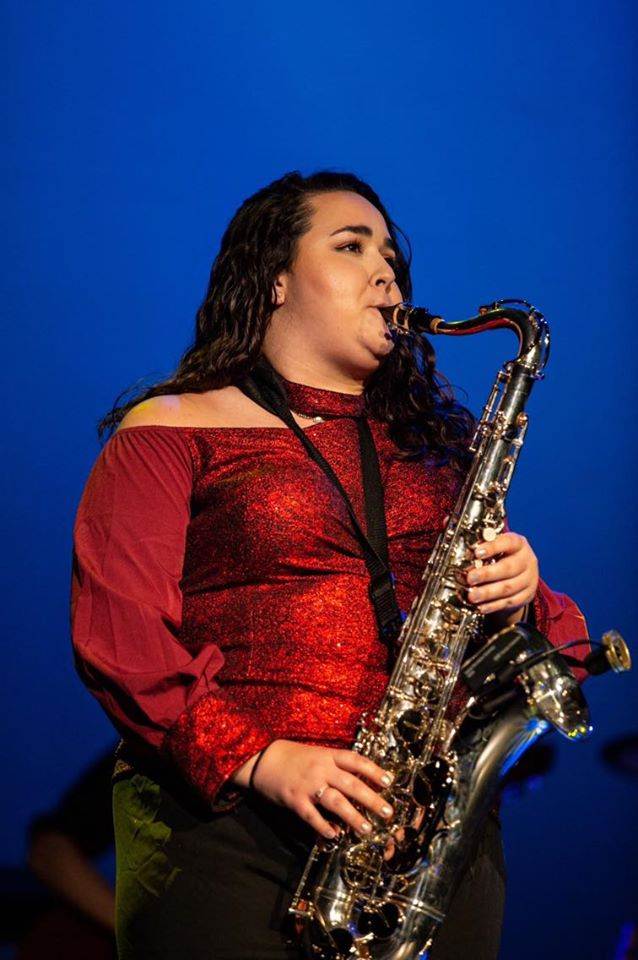 Sierra Newman’s friends and teachers at LBW Community College want her to be remembered as the positive and joyful person that she was.

Thursday, around noon, Newman was in a two-vehicle crash on AL 55 that ultimately ended her life.

She was a student at LBW Community College and the saxophone player for the LBW Ensemble.

Yesterday, the ensemble paid tribute to Newman by playing its first show.

“Sierra was always in a really great mood,” Christopher Racz, a fellow member of the ensemble said. “Even when she wasn’t in a good mood, you couldn’t tell. She just seemed happy all of the time. She always put others before herself and made sure that we were OK mentally.”

Grayson French, a trumpet player for the ensemble said Sierra was always happy.

“She was always energetic,” French said. “And she was a dang good saxophone player.”

Newman worked at Subway in Georgiana and her friends said that she took a lot of pride in her job.

“She absolutely loved it,” Steadman Glenn, a singer for the ensemble, said. “She just took it very seriously all of the time. She would also just blare music from her car when she was driving.”

Riley Shaffer, a guitarist for the ensemble said that Newman was very self confident.

“Some people have bad a bad self image, and say, ‘Oh, I don’t look good today,’ I have never once heard her say that,” Shaffer said. “I remember specifically, last year, she spilled something on her shirt and immediately all she said was, ‘I’ll make it work.’ She was just always happy, no matter what was going on.”

Maggie Anderson, a singer for the ensemble, called Newman the sister she never had.

“She was just an overall sweet girl,” Anderson said. “Everybody loved her and there wasn’t a person who had any ill will towards her. She always had a smile on her face and whenever we would sing Sweet Home Alabama she would always yell, ‘Roll Tide Roll!’ She was like the sister I never had, because I grew up with four brothers. She was just so beautiful inside and out. I don’t want any one to be sad. I would want them to picture her smile and her laugh, which was amazingly contagious. I want everyone to remember the good things about Sierra. I want them to remember her being there for all of us because she was a member not of this group, but of this ensemble family. I want her to be remembered in every show that we do and every practice that we do because she would have wanted that.”

“Our hearts our broken,” Helms said. “We are never prepared for this. She was a very vital young lady, full of life. She was a part of our ensemble and sadly, as you can see, they performed without her today, which shows a testament to their courage for honoring her memory. We very much miss Sierra and we plan to be there for her family and friends. It is just a sad day here at LBW.”

Dean of Student Affairs Jason Jessie said it was a pleasure to have Newman as one of his students.

“Her involvement in ensemble kind of made her one of the faces of the school because of all of the outreach that they do,” Jessie said. “We are going to miss her a lot but she was just wonderful to be around. She was sweet, nice as could be, and just positive.”

Ensemble director Johnny Brewer not only had her as a student but also played alongside her in the yacht rock band, the Yachtfather.

“When I talked to her grandmother last night, she told me that Sierra would have insisted that we perform today,” Brewer said. “Sierra had been talking about how much she was looking forward to us playing Hallelujah. She was a terrific saxophone player. She wanted to be great and she was always trying to improve her playing, never staying stagnant. She would always ask me ways to make this better or that better. When we did I Will Always Love You, she dug into that saxophone solo so much because she wanted it to be great. When we played it last year at Troy University’s Mic Check Music Industry Conference, my professor and band director Robert W. Smith was very complimentary about how well she played, which is a big deal to her and me. This is just a huge loss.”