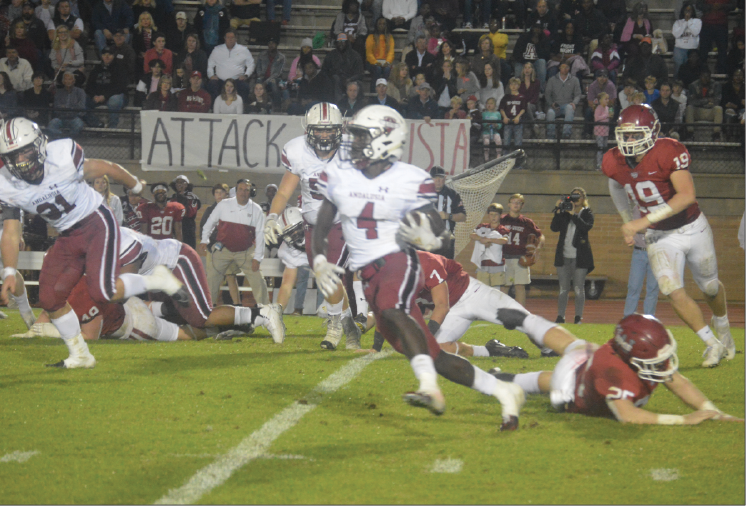 Bulldogs lose in semi-finals to UMS-Wright

Despite going up by two touchdowns early, the Andalusia High School Bulldogs were unable to hold off the UMS Wright Bulldogs in the fourth round of the AHSAA Class 4A State Semifinals.

Andalusia received the ball first, starting at the 24-yard line. After four-and-out, the Bulldogs punted it to the UMS 37-yard line.

With 9:41 left in the first quarter, UMS could not convert on third down and had to punt. The snap went over the punters head and the Andy Bulldogs got the ball deep in UMS territory.

Zymon Ray converted on third down for Andalusia after catching a pass down at the 11-yard line.

With six minutes left in the first quarter, Cameron Morrissette broke through the UMS defense and took it to the end zone. After the touchdown, a flag was thrown because Morrissette spiked the ball. UMS then blocked the extra point and Andalusia was up 6-0.

UMS got the ball on the 47-yard line with 5:40 left in the first quarter. A minute later, Elijah McClain had a huge interception for Andalusia running all the way down to the 50-yard line.

With 2:32 left in the first quarter, the Bulldogs were stuck fourth and one, but Morrissette pushed through getting the first down for Andalusia.

Andalusia was then forced to punt, but after a mishandled kick, UMS took over at the Andalusia 39-yard line to start the second quarter.

After several flags were thrown on UMS, they were deep in their own territory and had to punt on fourth and 27. Andalusia took over on their own 10-yard line.

With 7:28 left in the half, McClain had a big first down run to get Andalusia down to the 26-yard line. Another first down rush for Morrissette put AHS on the 41-yard line.

McClain rushed again to the opposing 20-yard line, but it was called back for holding, that did not stop McClain though, on the next play, he rushed from AHS own 39-yard line to the end zone for a touchdown. Reese Burkhardt caught the two-point conversion to increase the AHS lead to 14-0.

With 3:40 left in the half, UMS started driving down the field with short passes. Eventually the UMS quarterback connected in the endzone with one of their receivers to cut the lead 14-7 at the half.

The beginning of the second half went back and forth between both Bulldogs, but Andalusia had another scoring opportunity with 6:29 left in the third quarter, but the field goal was no good.

After a pass interference call and a roughing the passer call on Andalusia, UMS found themselves in AHS territory again. With 1.5 seconds left in the third quarter, UMS connected in the endzone again to tie it up at 14-14.

The UMS defense was able to contain the AHS offense for the rest of the quarter and with 3:23 left in the game, they found the back of the endzone again to go up 21-14.

“We had the defense out there in the second half a little too long,” AHS head coach Trent Taylor said. “But that’s what happens when you have two good defenses on the field. They made the plays on offense that they needed to. Any time that a player can play 16 extra football games that’s something special. I know that it hurts for these seniors, but they have something they can certainly be proud of.”

Taylor said the community showed up and gave it their all.

“They did what they were supposed to do,” Taylor said. “They were loud and gave us a great opportunity. I just hate it for the seniors and wish there was something I could do differently. We’ll just go back to work.”

With the loss, the Andalusia Bulldogs finish the season 10-4.