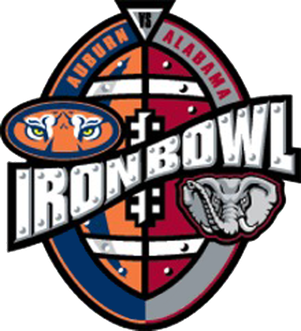 What some people call the rivalry of the century is being held today as No.5 Alabama Crimson Tide takes on the No. 16 Auburn Tigers.

The teams will battle it out before a sold-out crowd at Jordan-Hare.

Since Covington County is deep in the heart of Alabama, several people gave their opinions on the topic on a Facebook post yesterday posting about who would take the “W” this year.

23 people voted in the post on Facebook and 18 people agreed that Alabama would roll over the Tigers this year.

The Iron Bowl kicked off in 1893 in Birmingham at Lakeview Baseball Park, with Auburn winning 32-22.

The last time that the Iron Bowl was played in Birmingham was 1998 when Alabama won 31-17.

In 2002, Auburn had a six-game winning streak in the Iron Bowl, but the Crimson Tide finally broke the streak in 2008, with a 36-0 at Bryant-Denny Stadium.

Last year, the then-No.1 Alabama cruised to victory over Auburn 52-21.