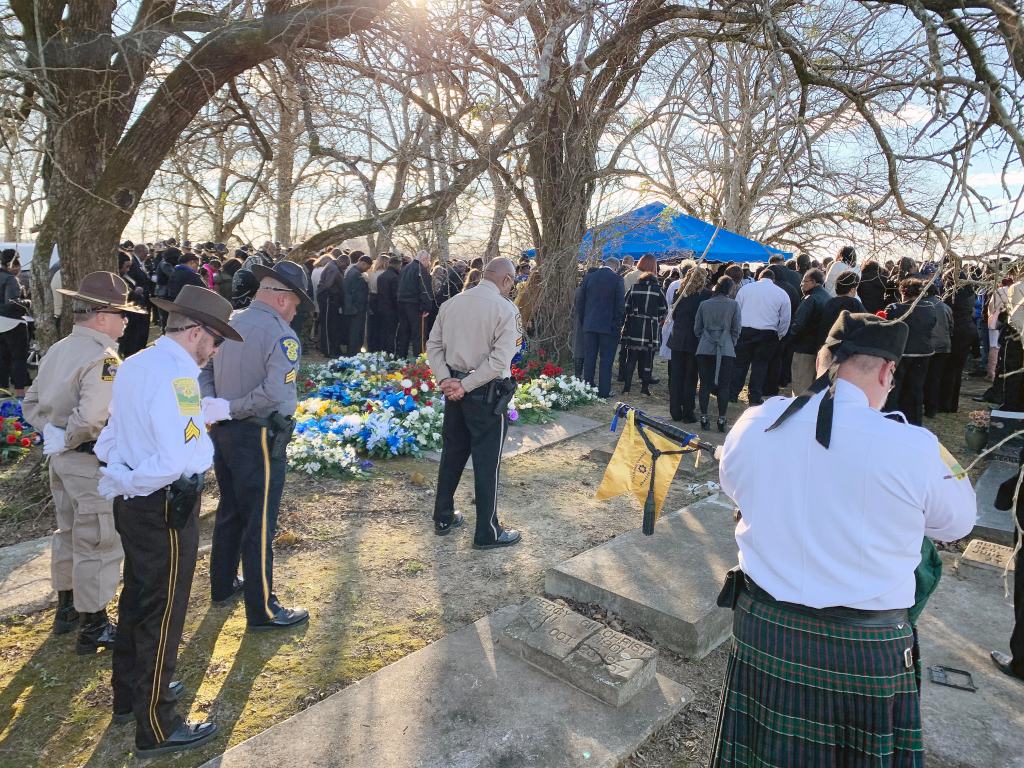 More than 3,000 people turned out Monday to say goodbye to the man known simply as “Big John.”

John “Big John” Williams had served Lowndes County in various aspects of law enforcement – the past 10 as sheriff – before dying in the line of duty in late November. His death shocked communities nationwide as officers from as far away as New York and Chicago came to say farewell to the man who had patrolled the streets of the rural south Alabama county for the past four decades.

Williams, 63, was gunned down outside the QV gas station in Hayneville as he responded to a noise complaint in a crowded parking lot on Nov. 23. Details of Williams’ death are beginning to emerge as the alleged shooter, William Chase Johnson, 18, begins his journey through the court system, accused of shooting the sheriff at close range as Williams asked individuals to leave the store’s parking lot. Johnson surrendered at the scene just over three hours after a manhunt began.

Monday’s funeral at the Garrett Coliseum in Montgomery paid tribute to Williams for nearly three hours as the service included a variety of speakers and music. Pastor Courtney Meadows of First Missionary Baptist Church in White Hall shared stories of Williams breaking into song during events at churches throughout Lowndes County.

“We’re used to him being filled with the Holy Spirit,” Meadows said. “Giants of individuals like ‘Big John’ have a measure of eternality. What a mighty man – what a Christian man.”

“‘Big John’ was my brother,” Norris said. “I watched Alabama sheriffs and elected officials give up their seats for ‘Big John’s’ family of employees. ‘Big John’ loved his (law enforcement) family. He hired them, he trained them and groomed them. On the night ‘Big John’ left and went to Heaven, this family stood up to the plate and they protected Lowndes County and kept it strong like ‘Big John’ had done for over 10 years. I want to say thank you to his staff.”

Norris said that when the previous sheriff died, then Gov. Bob Riley appointed another sheriff when all had hoped for Williams to take on the role.

“The people of Lowndes County decided to prove to Gov. Riley that he was wrong,” he said. “They elected ‘Big John’ Williams with the highest number of votes percentage-wise in the entire State of Alabama.”

Norris said he and Williams were elected on the same night a decade ago.

“We had a little private plan – I was going to be his chief deputy if I got beat and he was going to be mine if he got beat – and we both won,” Norris admitted. “We spent a lot of time together. He spent the night in my home. We never made a serious decision in either one of our departments without getting on that phone and talking about it. John would always tell me, ‘Whether you like it or not, if you do what’s right, you will never go wrong.’”

Norris said on Sunday night he had a dream about Williams and it reminded him of a day he spent with his longtime friend several years ago.

“‘Big John’ and I were riding around on Martin Luther King Day and going and eating everywhere that they had food,” he said. “We listened as Martin Luther King’s ‘I have a Dream’ speech was read. I’ll never forget that he listened as the speech got to the point where it said, ‘I have a dream of a little white boy and a little black boy playing in the yard together.’  ‘Big John’ said –‘We are those boys.’”

Montgomery County Sheriff Derrick Cunningham was also close to Williams and choked back tears at times as he spoke.

“June 14, 1957, was his date of birth and we love to put that little dash in there when we talk about the day that he left us,” he said. “Only thing I can talk about is what happened before that day. He was my friend; it’s hard. We went everywhere together. If we traveled, we traveled together.”

“He kept me laughing from the time we’d leave until the time we got back,” Cunningham said. “Even if he lost his luggage at the airport – even if we didn’t have time – he’d want to stop and get a hamburger. I’d tell him we had to get on a flight and he’d say – ‘We got time to get a hamburger now.’ He wanted to stop and look at all the food in the airport. But I loved him – God I loved him.”

Cunningham said Williams was “a true law enforcement officer.” He shared stories of how Williams would ride through the county and blow the air horn in the patrol vehicle or turn on the blue lights to say hello to residents.

“I may travel through Lowndes County and blow my air horn just to let you know I’m thinking about him,” Cunningham said. “He was a true peacemaker and a true servant of God.”

Sen. Doug Jones presented Williams’ widow, Joann, with a flag that had been flown over the capitol building in Washington, D.C. The service also included music by The Alabama Boys, one of Williams’ favorites.

Pastor J.D. Ruffin gave the eulogy and sang verses from the Bible as he stood in front by Williams’ casket.

At the end of the service, the haunting End of Watch call came over the radio bringing tears to many in attendance.

“4501 – 4501 – Sheriff Big John Williams, we thank you for your dedication, loyalty and service to the citizens of Lowndes County, Alabama and to the United States of America,” the dispatcher said. “Your sacrifice will never be forgotten. 4501 – Rest In Peace. 10-42, End of Watch.”

A hearse carrying the body of Williams then left Garrett Coliseum and headed south to McQueen Cemetery in Hayneville. Hundreds gathered as the more than two-mile-long procession entered the small, country cemetery, tucked off AL-21 adjacent to acres of pasture land.

An Honor Guard folded and presented Williams’ family with the American flag that draped his casket followed by the playing of “Amazing Grace” by a bagpiper with the Calhoun County Sheriff’s Office Honor Guard.

A 21-gun salute followed prior to the playing of “Taps” by echoing bugles. Helicopters then performed a “Missing Man Formation” flyover before a prayer ended the burial services.

(Adam Prestridge contributed to this article.)