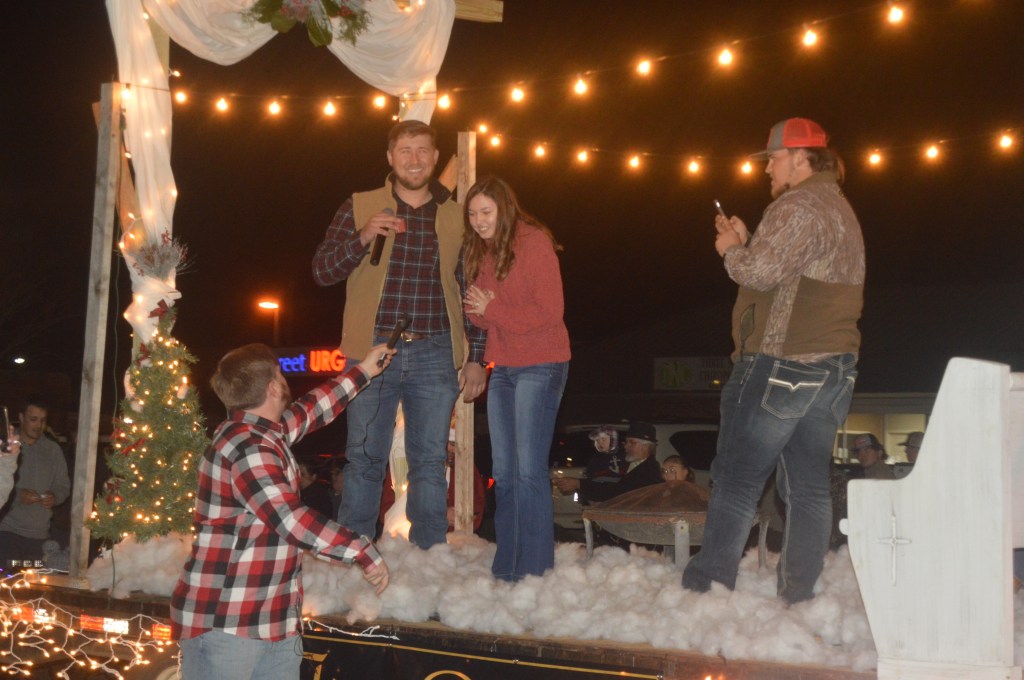 Christmas in Andalusia is already a magical event, but for Hunter Linzy and Savannah Morris, Thursday night’s Christmas parade was even more magical.

Linzy proposed to Morris on a float in front of city hall.

Linzy said he had actually planned on asking Morris to be his bride on Dec. 7, but wanting to do something different, his mom told him they were doing a float. They found out from Andalusia Area Chamber of Commerce Executive Director Chrissie Duffy that in all the years of the parade no one had proposed.

“That sounded like a good idea,” Linzy said. “That’s what we set sail for.”

Morris said she was completely surprised but the realness of being engaged didn’t hit her until they got home.

The couple has been dating for about two years.

Morris was working a Samurai when they first met.

“A mutual friend of ours worked with her,” he said. “I used to go in just to see her.”

It took Linzy a few weeks to work up the nerve to ask her out.

The pair said they split up to find themselves, but true love always finds a way.

“I had just got home from Texas,” Linzy said. “Mom and them were bringing me back from the airport when I got a message from one of Savannah’s friends. It was one of those messages you know is a Facebook hack. So, I texted to say said, ‘Hey, let such and such know that her Facebook has been hacked.’”

They started reminiscing, went to dinner and the sparks were still there.

Morris, who works at a jewelry store, said she had tried on the ring Linzy gave her so much that she had to change the tag on it.

“I sent him a lot of pictures of it,” she said.

Linzy said he waited until she stopped talking about it to consider the idea of marriage.

“I bought the ring. Got the date set and did my absolute best at keeping it secret,” he said. “That’s a challenge because she already knows all of her Christmas presents. I kept it a secret for about six months.”

The couple plans to have an extended engagement.