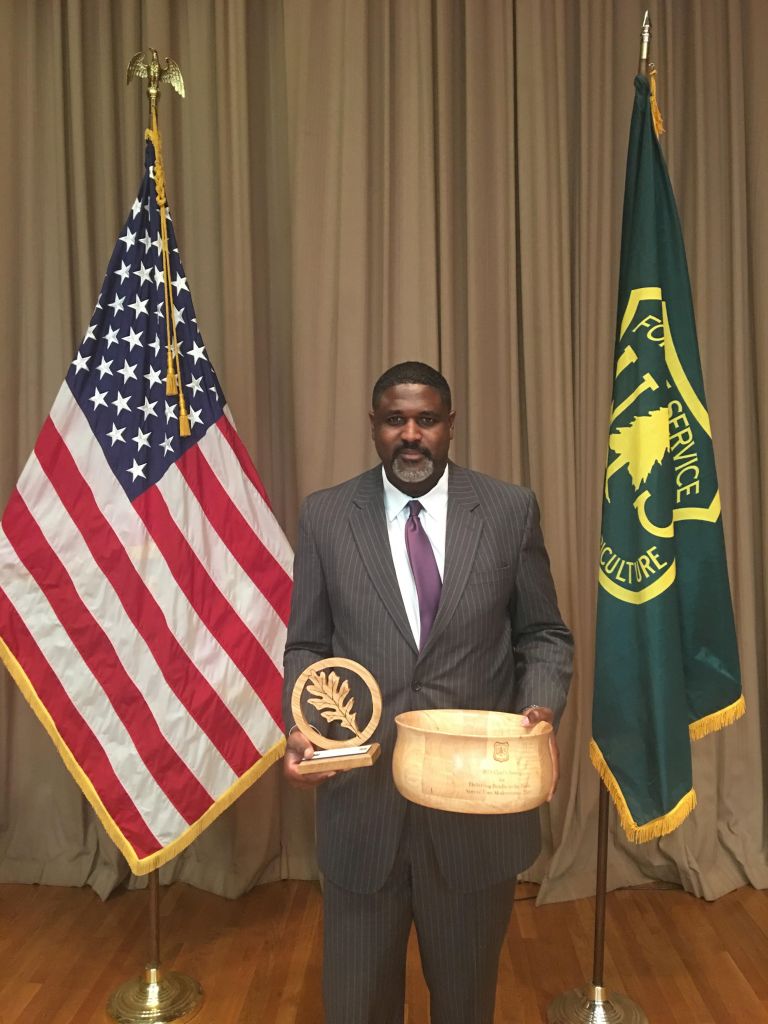 Denson has been in the forest service for 20-plus years. He graduated from Andalusia High School and Alabama A&M University.

For the last six years, Denson has worked under the Special Uses Program.

In his acceptance speech, Denson outlined the job of the Special Uses Program.

“I would like to give you a few facts about the SU Program,” Denson said. “We have a total of 70,000 authorizations nationwide with over 200 different types of uses, including: 18,000 miles of powerlines, 1,500 communication sites, 6,600 miles of oil and gas pipelines, 2,000 reservoirs providing drinking water to over 60 million people, 14,000 recreation residences, and 300 hydro-power facilities providing power to over $70 million people.”

Along with all of the facilities listed above, the Special Programs unit also has 1,300 commercial filming and still photography permits (such as: A River Runs Through it, Dr. Dolittle, The Hunger Games, Last of the Mohicans, The Lone Ranger and Ole Yeller to name a few, 122 ski areas providing winter recreation to the world, over 400 resorts and marinas, 7,500 outfitter and guides which provide small business opportunities in rural America, and 300 campground and day use concession sites. “These authorizations generated approximately $120 million in fees annually before we started the modernization effort,” Denson said. “After four years of focus improvements we now generate over $141 million in revenue annually.”

• SU authorizations account for more than 50% of the annual receipts generated by the agency.

• Lands Special Uses authorizations account for $30 billion in economic impact to the Gross Domestic Product (GDP), while the total recreation program accounts for $70 billion to the (GDP), totaling $100 billion annually.

“The SU Program is a great investment for the American public,” Denson said. “We would like to thank the Under Secretary and the selection committee for this great honor.”

Need to keep flu out of the classroom? Here’s…