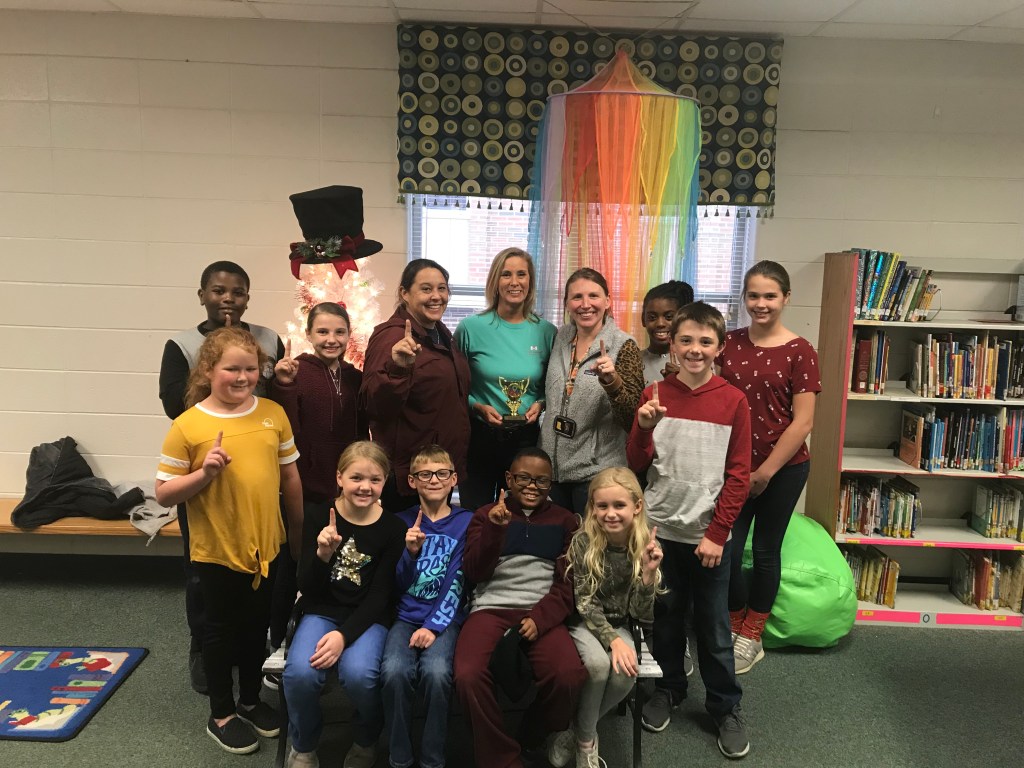 More than 500 elementary schools competed in the nation and RLES came out on top.

“Once we saw the leaderboard and realized that we were in third place, word got around the school and I said, ‘You all realize that here we are, a little, bitty, small school in south Alabama, and we are in third place? It’s a national challenge, and here we are, in third place,’” RLES reading specialist Kristi Hildreth said. “We looked at some of the schools and they were in places in big cities in Texas and one out in California. The kids were like, ‘Cool! We’re going to win this. Nothing is going to stop us.’ And they just really got on the ball. After that, it was every chance they could get, they would ask to get on the computer and get on Exact Path.”

Hildreth said it was the motivation to get their work done and do their work correctly that won them the award.

“I said to the students, ‘OK, we just have to work. You have to do your work and you need to do your best on your work,’” Hildreth said. “They wanted the bragging rights. We didn’t have to push them anymore. They wanted first place.”

When the students heard the news about first place, Hildreth said they were screaming from excitement.

“When I went around and told them, they were just screaming,” Hildreth said. “They are full of excitement and they are so looking forward to the plans that we have for the pizza party. We’re going to do it like a block party. We’re going to block off the parking lot and get a boom box with some music and we’re just going to let them dance and play and have a good time and eat pizza.”

RLES implemented Exact Path last year as a way to track progress of its students.

“We implemented Exact Path most specifically with our RTI students for both math and reading, as well as our special education kids to work with them to bridge the achievement gap,” Hildreth said. “Our special education teachers are able to write their students’ IEP [individualized Education Program] from showing the skills levels that they’re at and that they’re working on. Teachers have also been able to use that data to drive daily instruction and identify some of the skills where students need remediation. And one thing we like about the program is that it kind of mirrors the Alabama Comprehensive Assessment Program that we’re going to be doing in the spring. The layout all looks very similar, which is what my teachers are telling me. Using Exact Path is helping to catch students up on those missing skills and then helping those students who are above grade level to advance and move forward without having to wait on the other kids who are somewhat behind. Exact Path is very useful for putting each kid where they need to be in order to close any achievement gap or, if they’re already ahead, to keep pushing them and to keep challenging them.”

Hildreth said second graders use Exact Path during their remediation and their RTI time.

“The students usually master a skill every few days, and then they’re taking the progress monitoring check,” Hildreth said. “My third graders use it during centers and small groups. The students are self-motivated; they actually like to get on Exact Path during any spare time that they have. They have printed trophy pictures out on the wall, and the students color them in as they’re mastering skills and working through the progress checklist. That’s friendly competition and we have very competitive students at RLES.”

The fourth graders use Exact Path for their morning work and their small-group intervention, Hildreth said.

“One way that teachers motivate students is by doing classroom coupons for performing well on their quizzes, and then they get a little printed Exact Path trophy, and they color it in every time they master something,” Hildreth said. “Fifth graders use the trophy pictures on the wall, as well. Students get excited when they earn a trophy in the program, and then they get to go out to the hall to color in a level on their printed trophy and see how they compare to other students’ trophies. If their trophy is not colored in as someone else’s, they work hard to try and pass more skills. Our six graders do something a little different. They have what’s called a ‘class store.’ For every trophy they earn, they get a classroom buck. Then they have a class store that they can shop from and ‘buy’ things like homework passes, different snacks, different candies and things. So, the kids are motivated to earn that money.”

For other teachers interested in Exact Path, Hildreth said they have to buy into it.

“It’s not just the kids,” Hildreth said. “If the teacher is not excited about the program, the students are not going to be excited about it. However, when you are excited and you’re encouraging the students, they will get excited too. All kids want their teacher to be proud of them and the teachers’ enthusiasm for the program will also transfer over to the students being enthusiastic and wanting to use the program. What we are seeing at RLES is that these kids are becoming more confident in the classroom. We have some that, you know, they’re very shy in nature, and now, they’re getting more confident because they’ve got some of those background skills that they were missing.”