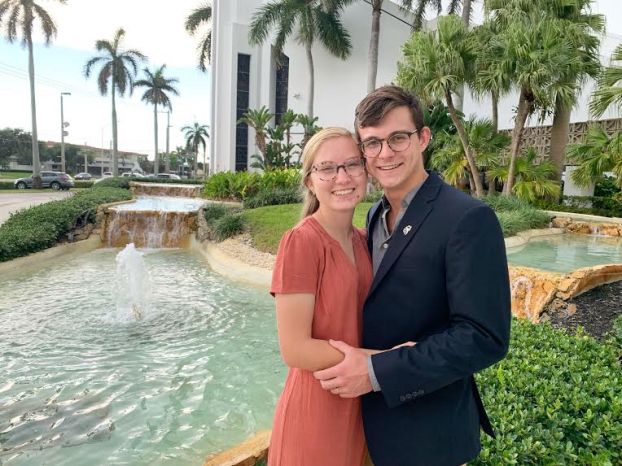 Blue Lake United Methodist Camp’s new program director Jessie Spangler has always dreamed of working for a camp ever since she went to one when she was six years old.

“I just fell in love with it the first time that I went,” Spangler said. “From then on, I knew that I wanted to work outside somehow. Eventually, I had this thought where I realized that people actually had to run summer camps, and why couldn’t it be me? I guess it’s my desire to never grow up or grow up, but still get to play.”

The Orlando area native graduated from Florida State University studying recreation, tourism and events. Before Blue Lake, Spangler was the on-site director for a summer camp in Ft. Lauderdale.

Once Spangler graduated college and started looking for jobs, she didn’t narrow it down to a religious camp, but now that she is with Blue Lake, she said it is the cherry on top.

“The camp that I worked at in Ft. Lauderdale was a regular, secular camp,” Spangler said. “When this opportunity rose, it felt like it fit me more with what I wanted out of a long term career.”

Coming from the bustling city of Ft. Lauderdale, Spangler said she has acquired some culture shock moving to Covington County.

“My husband and I knew that we didn’t want to live in a big city forever,” Spangler said. “So, moving here felt like a breath of fresh air. We were very excited to be in a small town. We wanted to be around trees and local friendly people. It definitely has been a culture shock, but it has been fun.”

As program director, Spangler will have the duties of managing Blue Lake’s winter retreat and summer camps.

“The two big things on my list are the winter retreat, which happens in about two weeks,” Spangler said. “We have about 300 to 500 third through fifth graders come on property and I have to manage logistics, staffing and things like that. Summer camp is the other big thing, which will last 10 weeks long throughout the summer and I have to manage 20 people on the staff and manage the waterfront and just make sure everything goes smoothly.”

Spangler said the best part of her job, so far, is the people she works with.

“This is a really great office,” Spangler said. “I have felt welcome here very quickly. I am just ready to pour into the kids and get to create an atmosphere where everybody is welcome. They get to just come here and play and leave all of their stresses out the door and just get to enjoy God’s presence here. I have felt more at peace here than I have in a while.”

She is hoping to bring some new ideas to the camp.

“I hope to bring some new inspiration,” Spangler said. “That could be revamping programs that we already have. I would love to get more involved with the local community. I know that we do a lot of things where groups come from all over the state, so I think it would be pretty cool to do some of the same stuff with local groups. I’m just excited to maybe bring a new perspective to the things that are already here.”

Executive director Steve Lewandowski said he is excited to have Spangler as a part of his crew.

“She is going to be a great new face at Blue Lake United Methodist Camp,” Lewandowski said. “I am excited to see God’s grace work through her and this camp.”