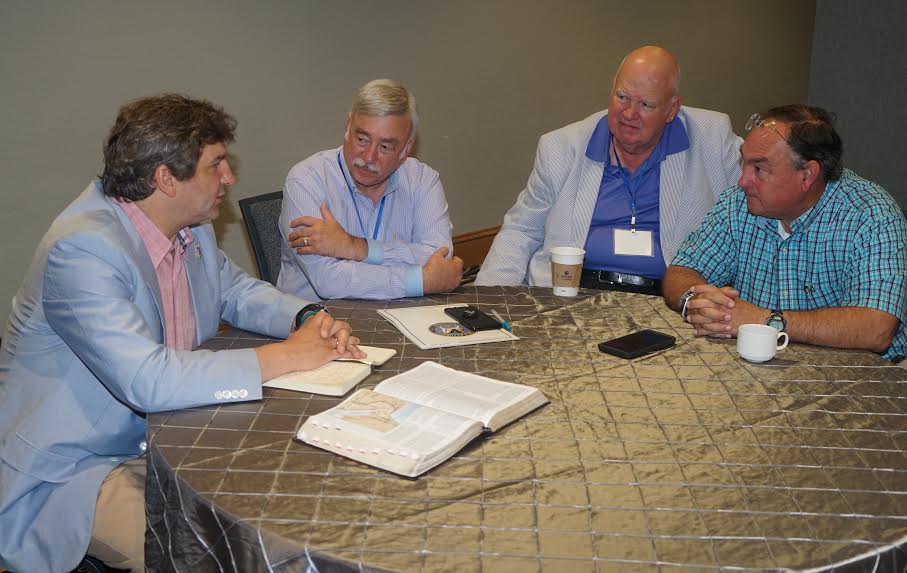 When fellow District Attorney Greg Griggers was injured in an ambush shooting outside his Demopolis office in November 2018, Walt Merrell knew it was time. Before the shooting, Merrell, the district attorney for Covington County, had felt a calling to use his faith and his experience assisting people dealing with personal struggles, to help prosecutors cope with the trauma and heartbreak they regularly encounter as part of their job.

The means to doing that was the creation of the position of chaplain for the Alabama District Attorneys Association.

“It was something that was on my mind. I felt that it’s something the association needed,” Merrell said, though he was hesitant at first to ask to be appointed chaplain. “When Greg got shot, I was interested in reaching out to him. One of the things that came out of it is we have a much stronger relationship. I am grateful for that.”

Less than a month after the shooting, the ADAA created the position of chaplain and appointed Merrell.

“I saw that too many of my peers, friends and casual acquaintances were drowning in the turmoil of doing their job,” Merrell said. Prosecutors on a regular basis must confront heinous crimes, acts of cruelty and grieving families.

“The things you see as a prosecutor, you can’t un-see. The way you recover from that is through hope. My job is to comfort and offer encouragement, and to suggest to them there is hope out there.”

The past year has been an especially difficult one for the ADAA family. In November, Sloan Harmon, the 20-year-old son of St. Clair County District Attorney Lyle Harmon, was shot and killed while driving in St. Clair County. And over the course of the year, six law enforcement officers, including longtime and well-loved Lowndes County Sheriff John Williams, were killed in the line of duty.

In addition, the high-profile abductions and murders of a 3-year-old girl in Birmingham and a 19-year-old female college student in Auburn shook both the public and those in law enforcement involved in the desperate searches after they went missing. The emotional toll from dealing with such tragic cases is akin to post-traumatic stress disorder, Merrell said.

“Prosecutors and police officers face a secondhand trauma on a daily basis,” he said. “Many suffer PTSD from reliving the tragedies through the victims.

“Prosecutors have to have a very rigid exoskeleton to be immune from personal attacks and attacks from defense attorneys when we are just doing our job. But that exoskeleton doesn’t make us immune to the pain and suffering we see from the victims. It’s just a shell. We are still people inside. What I hope happens (through my position as chaplain) is a mechanism of support for those who are worn out or need help coping, without them having to worry about the stigma of going to counseling.”

Merrell has served as district attorney for Covington County since 2011. Before that, he worked four years as an assistant district attorney, preceded by six years in private practice as a criminal defense and plaintiff lawyer.

Outside of his work in the courtroom, Merrell puts in action his faith as a devout Christian as well as his desire to help others. He regularly speaks to schoolchildren and community and religious groups about the importance of making good decisions, staying out of trouble and avoiding the dangers of alcohol and drugs.

“The single biggest threat to the stability of our nation and to the structure of our society is addiction,” Merrell said. “Ninety to ninety-five percent of crimes are drug related or drug motivated. From that standpoint, you have to fix the problem. I tell people our job is not to prosecute, it’s to fix the problem.”

When he and six other men came together to create Crossover Ministry, there was a severe scarcity of resources in Covington County to treat those with substance abuse problems, Merrell said. Now, the residential program can accommodate up to 36 people – both men and women – at a time. Participants graduate after six months. All funding comes from donations, he said.

“We want them to successfully live sober,” Merrell said. “A guy came back after going through treatment and said, ‘You saved my life.’ He wanted to start a drug treatment program in Covington County.”

Barry Matson, executive director of the ADAA, said the DAs appreciate having Merrell available to talk with. Matson is usually the first to get the call when tragedy hits or a DA needs help.

“Having Walt is a real resource,” Matson said. “I make it a point to be there personally when one of the DAs needs help or a family needs comforting. But having someone else available, especially someone they know well and who demonstrates such a strong faith, is a big plus for the association. I am proud of the work Walt does.”

“Walt is a no-nonsense guy, but he has a love for God and a passion for people,” Lee said. “It shows in his willingness to reach out to other DAs who might be going through some things. It also shows in the work he’s doing in his community. We are very fortunate to have him.”

Joe Borg, director of the Alabama Securities Commission and an ADAA affiliate member, said it’s important for the association to have a chaplain, and he believes Merrell is a great fit for the job.

Larry Smith is a retired chief investigator for the Madison County DA’s office and has been an ADAA member since 1972. “I was really pleased they created the position of chaplain,” Smith said. “We have things to celebrate, and we have things to grieve. Having established that position, DAs now have someone with their background to celebrate with and to grieve with. Walt is a spiritual man who knows how to reach out and connect with other people.”

Merrell said being a district attorney does make it easier identifying with the emotional and spiritual strains that other DAs face.

“There’s a certain comradery that exists. We kind of think only other prosecutors can understand what we go through,” he said. “The typical prosecutor is guided by two things: enforcement of the law and doing what we know to be right. The prosecutor who is working hardest to protect society is wearing himself or herself out. That’s why we need a chaplain.”