Walking for a reason: Idaho local walks through Andalusia on cross-country journey 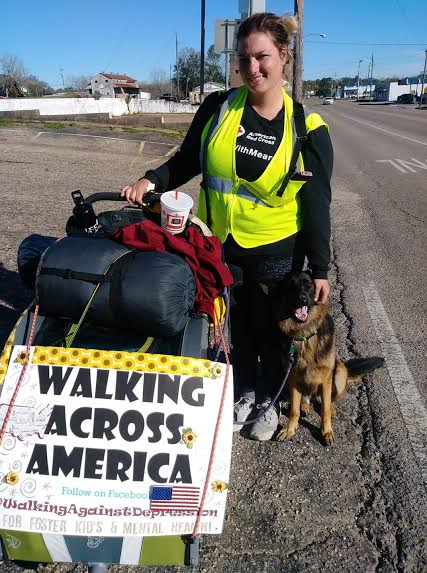 After dealing with lifelong abuse and mental health issues, Idaho local Nicole Stevenson decided to go on the journey of her life walking from the beaches of South Carolina to the beaches of Oregon in the hopes to spread her story and awareness for sexual abuse, mental illness and the foster care system.

She isn’t the only one making the trek across the U.S. Stevenson brought along her service dog, Venus, to keep her company.

“She is my service dog for PTSD,” Stevenson said. “I was severely abused by my parents and then I was abused in the foster system. So, that is why I have PTSD and Venus helps out with that.”

Stevenson does have a navigator but does not exactly know where she is going to stop for shelter every day.

“I usually just try and rely on peoples’ kindnesses,” Stevenson said. “I’ll either stay at police departments, fire departments or I’ll knock on a door and ask if I can pitch my tent in someone’s backyard.”

Telling her story is the purpose of the whole trip, but hearing other people’s stories is another big part of the trek.

While Stevenson was in Enterprise, Ala., Randy Keahey owner of Keahey Funeral Home in Andalusia, saw her walking and decided to house her for a couple of days.

“Randy was in Enterprise and saw her walking and thought that she was walking with a baby carriage,” Kim Keahey said. “And he knows that even if we see somebody walking, even with a dog, we try and pick them up. After he stopped and talk to her, she explained more of the sexual abuse and our son, R.J., was sexually abused as a child by a distant relative, who was dead long before R.J. told us.”

Once the connection was made, the two shared their stories.

“We just really hit it off,” Kim said. “Her and R.J. shared some of their stories together. There is just so much shame associated with sexual abuse. There were so many similarities with their stories. When Nicole told the authorities nobody believed her, when in fact, 97 percent of children who report these things are telling the truth. It is a horrible thing to be educated on, but seeing the aftermath of what it causes, I mean R.J. went through years of a struggle with addiction, not saying that we blame completely sexual abuse for the addiction, but it was definitely a factor. Normally, trauma is an underlying factor for mental health issues like depression and anxiety, like in Nicole’s case.”

All along the trip so far, Stevenson has shared her story with several people at the stops she has made.

“At first it was really hard,” Stevenson said. “I wouldn’t even go on camera, but now I am just learning to be open because we are all going through something in this world and if we just come together and love each other as a community I think we can do great things.”

The thing that Stevenson wants from her journey is for the foster system to be looked at deeply.

“The system is definitely a broken system,” Stevenson said. “I think we need to do better for our children because it is not the children’s fault that they are in the foster system. You go into homes that are more broken than what you came from. I want people to recognize that we need to come together as a community. We sit in front of our TVs and we go home and we lock ourselves away and that is not the way that it should be. I think we need to come together as a community to help everyone heal because we are all going through something. It’s not just me, it’s literally everybody that I have talked to.”

Stevenson’s journey can be followed on Facebook at Walking Against Depression. She shares live videos at almost every stop that she comes to and shares the stories of the people she comes into contact with.