Christmas for the troops in 1944 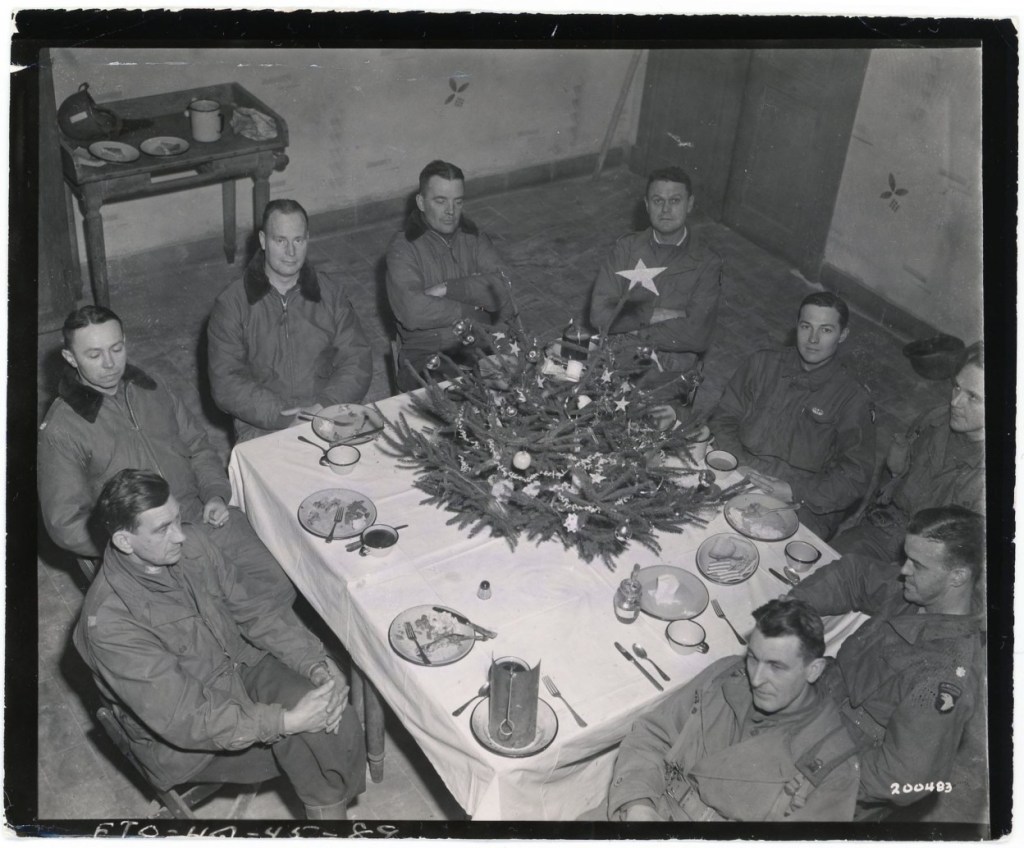 Christmas Day 1944: Officers of the 101st Airborne Division have Christmas dinner in Bastogne, Belgium while the city is still under siege. Brig.Gen Anthony C McAuliffe, 4th from the left, was the commander of the besieged troops and was famous for his reply, “Nuts!”, when asked by the German commander to surrender.

Seventy four years ago, many of our Alabama soldiers, along with their brothers in arms, were engaged in a life or death struggle to repel a German attack along a 74-mile stretch of lightly defended allied lines in the Ardennes Forest in Belgium.

That battle, later known as the Battle of the Bulge, was fought in the middle of one of the coldest winters ever recorded in Europe.

Hitler’s goal was to split the allied armies in half and drive to the port of Antwerp, Belgium and control the port.

It took some six weeks before the German attack was repulsed. Considered the bloodiest battle for US troops during WW II, it cost the lives of some 19,000 soldiers, with more than 47,500 wounded and 23,000 captured or missing. Although it seems low, the official German casualties were 10,749 killed, 34,439 wounded  and 22,487 missing or captured. An additional 3,000 civilians were also killed.

The battle reached its peak during the siege of Bastogne, which lasted from Dec 20 through Dec 27. Both sides knew the strategic importance of Bastogne. After having encircled the city, the German commander sent a hand-delivered note to the American commander inside Bastogne asking him to surrender. The American commander, Brig. Gen. Anthony C McAuliffe, upon being awakened and given the note requesting his surrender, replied, “Nuts!” The reply was dutifully transmitted back to the German commander.

For both the US troops in Bastogne and those defending the city from the outside, Christmas 1944 was celebrated “in any way they could manage.”  An Army Chaplain held Christmas  services inside Bastogne. For those on the battlefield outside, it was survival first, Christmas celebration second. Many stories have been told by these soldiers of their experiences that Christmas. One such story was recorded by BBC interviewer, Keith Davis in 2016:

“We were out in the outskirts of Bastogne, we found this farmhouse. Inside was a man and a woman and a little boy and a little girl…the wife gave us some soup and some black bread. We stayed there all night in this farmhouse. The war was going on fiercely outside and for some reason, the farmhouse never got hit. We were there Christmas Eve. We sang Christmas songs that night with this Belgian  family. We sang ‘Jingle Bells’ and ‘Silent Night.’ The words were different but the   music was the same.”

Gen. George Patton had been attacking eastward near the Saar River in France. Upon orders from Supreme Allied Commander, Gen. Dwight Eisenhower, Patton wheeled his 3rd Army,  90 degrees and moved 100 miles in three days to engage the Germans forces surrounding Bastogne. Gen. Patton was considered the master of mobile warfare and this was considered his crowning achievement. On Dec. 26, just one week after Gen. Patton had started his march, his 4th Armored’s 37th Tank Battalion, under Lt. Col. Abrams, broke through the encircled German lines at Bastogne.

For the Americans holed up in Bastogne, it was a Christmas never to be forgotten. Liberation on the day after Christmas was a gift never to be equaled in civilian life. Gen. Patton and his 3rd Army were “Santa Claus” personified.

Unfortunately, the war would drag on for almost another five months before Germany’s unconditional surrender on May 8, 1945.