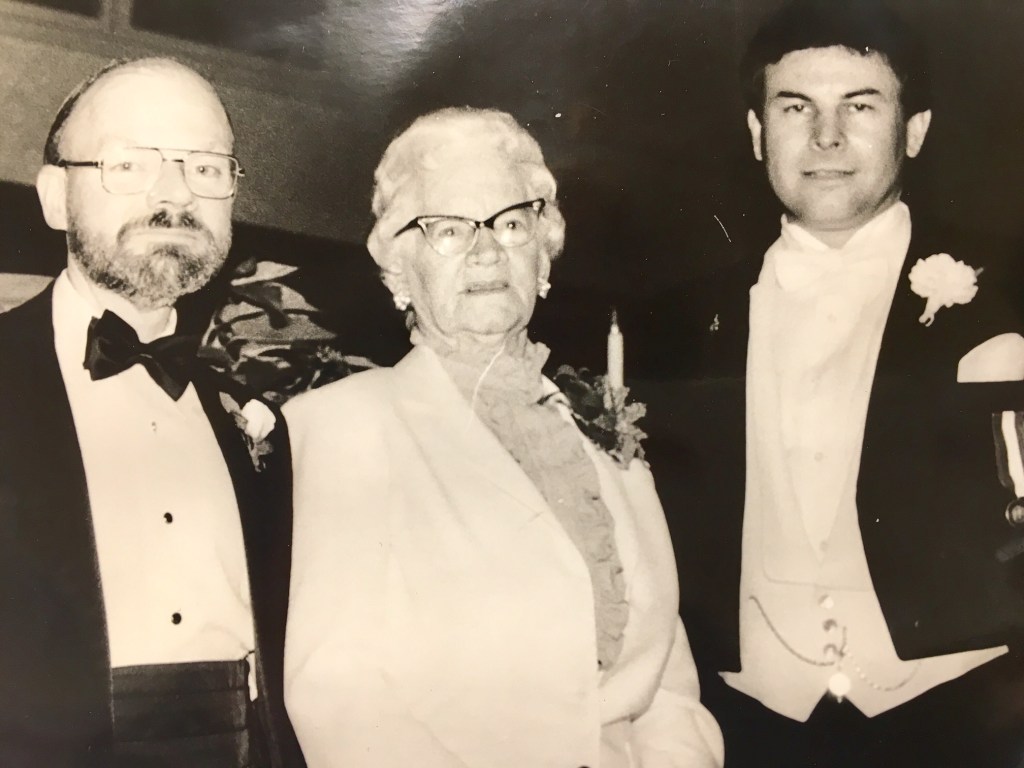 These are some lyrics of one of the many Christmas songs written for the annual Christmas Carol Sing hosted by Joseph C. Wingard and S. Daniel Shehan beginning in 1970. The Sing was held for 25 years, first at the Shehan home, Dovecoat in Meadowbrook, 1970-1980; next at the First Presbyterian Church six times; then at the First Methodist Church twice; at the First Baptist Church Chapel three times; at the home of Jim and Eva Maloy twice; and last at the home of Forest and Sara Hobson once.

Starting in 1971, Mr. Shehan, wrote music to Mr. Wingard’s lyrics for each year’s Christmas Sing, songs of their own. Their original songs were often dedicated in memory of or in honor of a friend of the talented duo.

Mr. Shehan’s father, Comer Broughton Shehan, built a lectern and small platform for use at the Sing.

Mr. Wingard who directed the Sing and served as master of ceremonies had a Santa suit made which he began to wear during the first half when the secular songs were sung. After the break for refreshments, he wore “white tie and tails” for the second half which featured the religious songs. Shehan wore a tuxedo throughout.

The two-to-three hour program evolved into a set format over the years. The first half usually ended with “The Twelve Days of Christmas” with individuals singing the various parts. The second half concluded with “O, Holy Night,” some carols, a prayer, “Silent Night,” the last verse a capella, and then with Mr. Wingard’s quoting Dickens A Christmas Carol, “And so as Tiny Tim observed, ‘God bless us everyone.!”

As songs were sung, Mr. Wingard would sometimes give a brief history or trivial information about the song or the composer. Special moments were enjoyed when some dear soul might get recognized for their birthday, for welcoming newcomers in attendance to town, for wedding anniversaries that might parallel the Sing, for the Sing falling on the date of December 14 when Alabama became a state, or when dedicating the Sing to the memory of one who had passed away during the year. A prayer offered once by Mr. James Arthur Wilson, retired AHS principal and fellow historical society member, will be long remembered.

The twenty-fifth and last Sing, sponsored by Wingard and Shehan, was December 22, 1994. After this, Dr. Rex Butler, a former student at AHS of the former beloved teachers, continued the Sing for several years.

In 2013 a collection of the songs written by Wingard and Shehan was published in a booklet, CHRISTMAS SONGS. Some of the song titles of these delightful songs include “Sing, Christmas Carolers,” “Wrap Me Up in Christmas,” “I’m Gettin’

The Wingard-Shehan Christmas Sing will be long remembered as one of the most memorable highlights of the Christmas season in Andalusia in that particular era. Did I mention the refreshments? Finger foods were brought by the friends of the hosts. Homemade goodies included divinity, fudge, pimiento and chicken salad sandwiches, open-face pineapple and cream cheese sandwiches, Christmas cookies and candies, and many other dainty delicacies associated with the Christmas season and not to forget the traditional wassail bowl punch.

Attendees always wore their Christmas finest. Donned in rhinestone, furs, feathers, wool, sequins, satin, velour, and lace, they came, usually in the chill of wintry weather, for an evening of musical and social enjoyment. Sir Francis McGowin and Larry Shaw once showed up wearing their Scottish kilts! The hostesses were always presented corsages of red roses and ivy. Wingard and Shehan wore their white rosebud boutonnieres.

Most memorable at the Sing was Mr. Wingard always singing “The Mistletoe Song” as he walked in and around the singers with excitement abounding as he held a sprig of mistletoe kissing this one and that one! Here are the words to the simple song that brought love and laughter to many, especially to some of the town widows!

This is just one poignant story, a Christmas memory, that will be preserved. If you have a significant one that stands out in your mind and you can say “Remember When…,” then write it down and it will not be forgotten. Remember, “The pen is mightier than the sword!” Merry Christmas and Happy New Year, readers! God bless you every one!