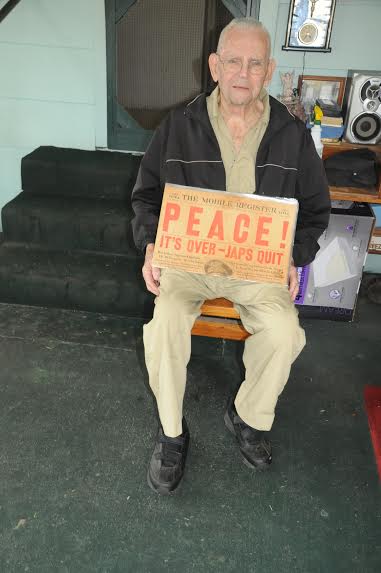 of Florala. Mr. Harvey Bass, Jr.,was born in Freeport, Fl. in 1921. His family moved to Florala and Harvey attended Florala schools. He quit high school and went to work for Jackson Lumber Co. He enlisted in the National Guard in 1940 and went through basic training. After that, he was assigned to Company C, 117th Field Artillery, headquartered in Andalusia. He was trained as a radio operator, an automotive mechanic, a light truck driver and as a cook. When his Guard unit was activated in 1943, he was working as a cook. He had been assigned to the 631st Tank Destroyer Battalion when he was deployed to Europe in July 1943. Immediately after their arrival in England, they were shipped to France where they camped in the Bergan forest. Mr. Bass said that they were a part of Gen. Patton’s army at the time. Their movement always seemed slow because Gen. Patton’s tanks were always running out of fuel. As a cook, Bass felt he played an important role, even though he was not in the thick of battle. He remembered the quote attributed to Frederick the Great and Napoleon, “An Army travels on its stomach”.

Normally, his kitchen was feeding about 160 men and he says he never remembers running out of food. As his company travelled on through Belgium, Luxembourg and Germany, Bass occasionally served as an MP [military police] with the 512th Military Police unit. Their duties included guiding traffic for the moving units and guarding the rear of Gen. Patton’s army as they marched into Belgium during the Battle of the Bulge. Bass said that his unit was 45 miles from the front when the battle broke out in late 1944.

Bass was promoted to Tech Sergeant [E 4] and received campaign ribbons for the Northern France Campaign, the Battle of the Ardennes, and the Rhineland Campaign.

He was also awarded 4 bronze stars. He was discharged in Oct. 1945.

He married Clara Mae McVay and they were married for 72 years until her death in 2017. Mr. Harvey O Bass, Jr. is survived by a daughter, Rea Strickland [Billy] of Enterprise, AL; Sons, Clyde Bass [Delores] of Crestview, FL and John Bass of Mobile.

By: John Vick for the Covington Veteran’s Foundation