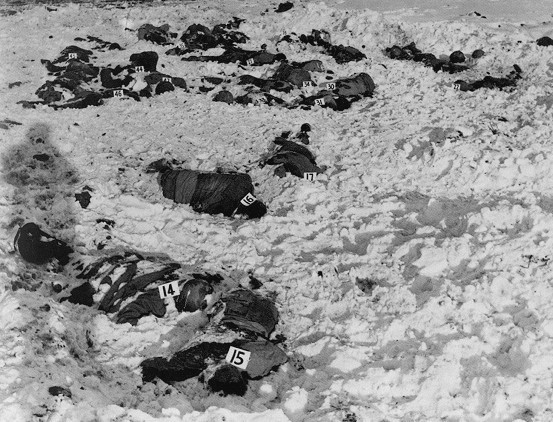 The Battle of the Bulge was an attempt of desperation by Hitler to slow the Allies march through France, Belgium and on into Germany. If it was successful, he hoped to split the allied armies and seize the port of Antwerp, Belgium.

The sudden attack, early on the morning of Dec 16, 1944, caught the allies by surprise and the battle to stop the Germans and regain the lost ground would not end until Jan 25, 1945.

The Battle of the Bulge [as it was later called] was the most costly, in loss of life and wounded, during the European war.

There were several documented atrocities by the Germans, particularly on the part of the Waffen SS. From the Normandy invasion onward, German soldiers were guilty of war crimes on several occasions. The most well known atrocity is referred to as the “Malmedy Massacre”. On the Dec 17, 1944, a group of American soldiers, mostly from Battery B, 285th Field Artillery Observation Battalion, were captured by a company of German Waffen SS troops near the town of Malmedy, Belgium. This German company was part of the 1st SS “Adolph Hitler”Division under the command of SS LtCol Joachim Peiper. The American troops were part of rear-echelon convoy and had not been involved in the heavy fighting.

Peiper moved on ahead with his troops in an effort to reach the Meuse River. He left behind a small number of troops under the command of SS Maj. Werner Potschke.

A short time after Peiper left, the captured Americans were assembled in a field. German machine guns opened fire on the defenseless American troops and massacred them. After the initial firing, the Germans walked among the bodies, shooting anyone who had survived. They even killed one Belgian widow who owned a local café. However, many of the local Belgians were able to witness the massacre and remain hidden.

In their desire to join Peiper as quickly as possible, the Germans decided against trying to round up more civilians and slaughter them as well. This allowed some of the American wounded to feign death and later escape. The Germans had murdered 85 defenseless American prisoners.

The bodies of those soldiers killed at the Malmedy Massacre lay in a virtual no man’s land from Dec 17 until Jan14, 1945, despite the evidence provided by the survivors, that a massacre had taken place. Only when the area was retaken by the 30th Infantry Division on Jan 14, was the area searched [it was mostly covered by deep snow]. With the aid of mine detectors, some 71 bodies were discovered. The fully clothed, frozen bodies were taken to the 44th Evacuation Hospital for autopsies over the next two days. It was discovered that some 43 bodies had gunshot wounds to the head, indicating follow-up execution after the initial firing. Many of the bodies still had rings, watches and money on them, contradicting some witnesses who said the Germans took the valuables from the Americans before herding them into the field. Because of the extreme cold, nine of the bodies still had arms, frozen, still raised above their heads.

After the war, some of the guilty Germans were tried for the Malmedy Massacre. Some 21 survivors had given statements on Dec 17 and they all, essentially said the same thing: after they had surrendered, they were disarmed and taken to the field where shot. They said that there had been no attempt made to escape prior to the firing. At the trials, the Germans gave conflicting testimony,  but in light of the much larger scale atrocities committed at places like the Dachau, most of them received only prison time. It was concluded by most witnesses at the trial, that the massacre had probably been planned ahead by the SS, as a part of their ruthless method of operations, or at the very least, done, spur of the moment, so as to not delay their movements.

In spite of the sentences, considered by most, to be too light in view of the crimes committed, justice eventually came to the German commander, Joachim Peiper. An unrepentant Nazi to the end, Peiper was killed in a house fire, set by an assassin in 1976.

A great first year with Star-News

Thank you for being a friend, Betty White

Be grateful for what you have this Christmas

The holiday season is truly something special

Christmas for the troops in 1944