Cancer Freeze recipient encourages women to listen to their bodies 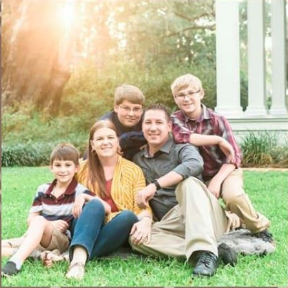 Cancer Freeze recipient Tabitha Inabnet encourages all women to be their own advocates.

Inabnet’s journey began in March 2019 when she noticed some differences in the tissue of her right breast.

“I had recently lost quite a bit of weight and it was something I had not noticed before,” Inabnet said. “After discussing it with my husband, I made a doctor’s appointment for an annual checkup and a mammogram. I went for the checkup May 14, and my mammogram was scheduled for the next week. At my annual checkup, my doctor did not seem concerned about the tissue and told me the area was just fibroids. Since I was 34 my insurance would not pay for a mammogram until I was 40. I told her that was fine, but I was still having the mammogram even if I had to pay for it.”

On May 22, Inabnet went for her first mammogram.

“The tech told me that if the radiologist saw any concerns, he would contact my doctor the same day and she would call me,” Inabnet said. “If not, I would receive a letter in the mail in about 10 days. I did not get a call that day, so I did not think anything else about it. I received a call with the results from my annual checkup on June 14. Everything came back normal and I was good to go. The nurse went to hang up and I asked what the results were from my mammogram. She looked them up and says ‘Oh, you need to have more test ran,’ Anger came over me immediately. It had been weeks with no phone call from the doctor’s office. So, I called and scheduled my next test. On the day of these test, June 18, the radiologist came in and told me I needed a biopsy and says, ‘You cannot wait another month,’ Three days later I had an ultrasound lead biopsy. The doctor tells me that he will call me with the results at the beginning of the week.”

While sitting at work, Inabnet said she received the phone call that would change her life.

“So, the journey of finding local doctors and having test ran began,” Inabnet said. “All the while my husband was stationed in New Jersey and we were trying to get him orders back home so he could be with me through this chapter in our lives.”

On August 21, Inabnet was scheduled to have a lumpectomy.

“On the Friday before, the surgeon’s office called and tells me that the radiologist that would be working with them on my surgery wanted an MRI because they saw something else that four prior radiologists had not seen,” Inabnet said. “Therefore, my surgery was postponed. I was so grateful for this. Through all of the doctors we had met with and all the test done, this was the only test I requested and the only one they would not do, until now. I went for the MRI and picked up the results two days later. I was astonished at what I was reading and so thankful to the radiologist who requested this test.”

There was an indication of two masses and a lymph node on Inabnet’s right breast and two concerned areas on the left breast.

“I drove from Crestview directly to the surgeon’s office in Niceville,” Inabnet said. “Once I got there, I handed them the report and said, this changes everything, doesn’t it? They said, yes. The surgeon was not in and they said he would be calling me later that afternoon and he did. We discussed what this would mean; he told me he wanted to send me to UAB. I agreed and was grateful that he could say we do not have what you will need in this area so I’m going to send you somewhere where they do.”

Inabnet had her first appointments at UAB on September 17 and 18.

“They did three additional biopsies, two of the masses on the left breast and one on the lymph node under the right armpit,” Inabnet said. “I met with the team of doctors who would be working my case. When we left, the treatment plan was a bilateral mastectomy with some lymph node removal with reconstructive surgery, chemo and radiation (if the lymph node came back positive) but surgery would be first. Around this time, we found out that my husband had received orders to come back home and would be back September 27.”

On September 20th, Inabnet was called with the results from the biopsies.

“The two masses on the left side came back negative but the lymph node came back positive,” Inabnet said. “As far as I knew, the treatment plan was the same, but chemo and radiation would be a go also. There are three masses and three lymph nodes on the right side.”

Inabnet started chemotherapy and said she was frightened at first.

“Chemo scares me and as a woman, the thought of losing my hair is absolutely terrifying,” Inabnet said. “Yes, I knew I was going to have chemo, but it was supposed to be after surgery. Chemo will start on October 28 and consist of four medications for six cycles. This will put me through February 2020. Once chemo is complete, I will have a bilateral mastectomy and removal of all lymph nodes on the right arm with an expander implant, radiation and a couple more surgeries for reconstruction.”

Through her entire journey, Inabnet said she has had peace that could only come from God.

“I encourage all women of all ages to be your own advocate,” Inabnet said. “If I would have just listened to my doctor I would have gone on with life and thought nothing else about it. Listen to your body. Through this all, I have had a peace that only could come from God. His presence is so real in my life and if it were not for Him, I would not be able to make it through. I am so grateful for the love and support that myself, my husband and our boys have had from our family, church, military family, friends, community and complete strangers. Thank you from the bottom of our hearts.”