REMEMBER WHEN: The Neighborhood Grocery Stores of Yesteryear 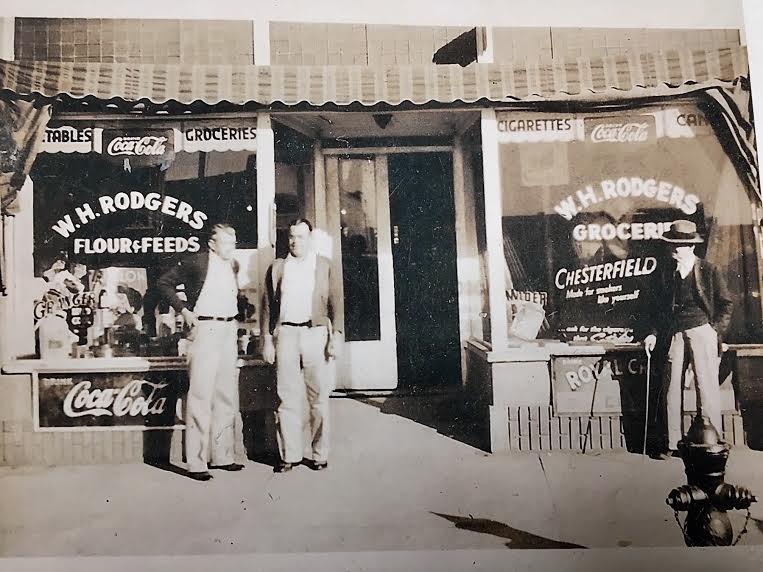 “One a penny, Two a penny, Hot Cross Buns” – This nursery rhyme of long ago reminds me of a recent post on social media. I posed the question, “Does anyone remember the neighborhood grocery stores in Andalusia?  Send your memories.” In less than 24 hours, I received 350+ responses. Let me share some of these with you readers.

South Cotton along with the Hudson Super Market in the Dixon Quarters, owned by James and Mildred Hudson. Ellison’s Grocery, she remembers was in that same vicinity. Eloise Davis Smith states that Mr. Bob Ellison was the great great grandfather of Dr. James Barton. ”Hudson’s sold drinks, chips, candy, ice cream, and hot dogs. There was an electric horse that kids rode which cost 10 cents.”

Jim Patrick posted that Hudson’s Grocery west off S. Cotton on Whatley Street was a classic full service grocery that sold affordable food, fresh meat with an in-house butcher (Mr. Legacy), and a good inventory. “They deserve a lot of recognition.”

Craig Hill mentioned the Brooms Grocery on Perry Street, James Henry’s a block off the square, and Theo Welch’s on the corner of Stanley and Lindsey Bridge Road. Welch was the uncle of Dan Shehan.

Mike Williams said he bought many snacks at Brooms Grocery and got quarters for the washer (laundry) next door.

Gloria Riley’s grandfather, John Taylor, operated a grocery store at the end of Barton Street in the 1950s. He and his wife lived in the house connected to the store. Tywnette Woley bought many banana popsicles at Taylor’s, she posted.

King’s IGA was one of the first franchise grocery stores in Andalusia – Kwik Chek, Delchamps, and A & P after that.  Jerry Griggs and John Cross said they used to walk there after school for candy. “It was always so friendly and welcoming!”

Genia Johnson Dorman fondly remembers the James Henry Grocery on South Cotton. Her daddy, Dr. Andrew Johnson, and James loved to fish together. Carol Henry Moore is the daughter of James Henry who was well-known as a good butcher. “When Earl and I were first married, Roscoe Worley would let us charge and allowed us to pay a little along until we could pay in full. I especially remember his hoop cheese. He and Barbara were good people.”

“The O. C. Graves Store across from Alatex and beside Variety Store bought Coke bottles from us boys, had Lance crackers for 25 cents, and sold some dry goods,” Mike Williams remembered. “I could go in and buy Mom’s Salems and Dad’s Camels!” Ross Henderson said, “We sold enough bottles to go to Ft. Walton Beach for spring break one year.’

Cheryl Register Snellgrove recalled, “My parents had a credit account there. You’d pay it off on pay days. When we were old enough, Mom would give us a list with orders to get only those items listed, never cold things because we took too long visiting along the way. Mr. Graves and his wife Mary and son Wayne were always ready to help us find what was on our list. I remember the little screen door & wooden floors, about 2 aisles of shelving with the meat cooler in the back, chips near the front window. Great times!”

Jim Patrick – “Barton’s was another classic. Kerosene out front, staples and meat inside. Back then, men knew how to cut meat. Most of these markets sold cubed steak or what was then called bucket steak. Gilmer’s Grocery, a one-room store, was about a block east of Riley Street. Within his meat case, he had bologna, liverwurst, salami, and bucket steak. After he closed, Daddy bought his meat saw, scale, big meat grinder, tenderizer, and hand cranked meat slicer so we could process our own meat. They all still work perfectly. Mr. Gilmer had a company type store where many of the Dixon’s saw mill workers had charge accounts.”

Mary Snowden Kanaley “loved those ice cream cups with pictures of movie stars on the inner lids that could be bought at the grocery stores.”

Debi Austin Stuckey remembers that her mother worked at Alatex and would sometimes have to work until lunch on Saturday. “She would leave me asleep in the car parked in what is now the S & H Car Lot. When I woke up, I would go to Graves Grocery across the street and get something to eat. Then I would go visit Mr. and Mrs. Adams at the Variety Store until lunch. They let Mother keep “credit” at the stores and she would pay for whatever I ate when she got paid! They babysat me lots of Saturday mornings in the 1960s!”

“Brogden’s Grocery on Three Notch was beside the present Church’s Chicken. Murray Brodgen’s wife, Grace, was a nurse. You could access the store by walking down a dirt road from Roselane Dr. You could get a lot of candy for one cent!” Beth Walker Maddox remembers. Dottie Pippin Castleberry and her sister would walk from home to Brogden’s to buy his biggest potatoes from his potato bin. Then they would go home to fry up a big batch of French fries for lunch on Saturdays. “It’s a wonder we didn’t burn the house down!” Joe Nix remembers Bonner’s Store also on East Three Notch.

Emily Albritton Hill used to love to stop by Theo Welch’s Grocery on the corner of Stanley and Lindsey Bridge Rd. She always spied the big ice chest filled with Grapico and Orange Crush which was her favorite refreshment in those days!  Gayle Grimes Rawls walked home from school to Green Acres and always stopped with her friends at Welch’s Grocery to get Cokes and snacks. “Daddy would pay at the end of the week.”

“Pruitt’s on Perry Street had the magic bottle Cokes you pulled out of the machine. I walked to my Granny Parrish’s on Dunson Street on the way back from the City Pool behind Church Street School,” said Lynn Parrish Capps.

Brenda Wambles Biggs mom and dad’s grocery store was on Stanley Street, Jim’s Grocery, across from the drive-in theatre and Cotton Tractor. Dora Blue says “We would walk through the woods from Blue Settlement through bushes, snakes, and things, cross the highway to get there on foot and visit it often – oh, the memories!” Edgar’s Store was a little farther south on the Florala Highway.

Patricia Jones Jeffries spoke of the hula hoop contest one Saturday morning in the parking lot next to the Three Notch St. Piggly Wiggly owned by Euclid and Berta Cook.

Johnny Jordan can’t believe that no one remembers Langston’s at the bottom of Dunson St. Ramona Jordan Pritchett says that Mrs. Langston dipped many a cone of ice cream for me – such a sweet lady!”

Robert Hart remembers Rodgers Grocery on the east square where Sanbuck Insurance is now located. Roger Powell and his dad Keltys used to walk over there from Covington Stores. When Carolyn Hart was a teenager, she used to work the candy counter and the cash register at Rodgers. She got good experience for the future store the Harts owned on Antioch Road.

Wilson’s Grocery was a bus stop, not a bus station as Mrs. Bernice Wilson was always eager to emphasize. Fruity popsicles of all flavors were enjoyed by the neighborhood kids who rode over on bicycles after school each day. Mr. Wilson’s grandson still has the butcher block from the store now occupied by the Sign Man, Paul Stuart. Angelyn Pippin Simmons recalls those days when her parents and grandparents with T-P Flower & Gift Shop had to pick up fresh flowers most days at the bus station.

Collis and Florence Cooper had a store on Carlton Street beside the Dixon Lumber Company office. Jimmy Cooper who visited the Three Notch Museum with the AHS Class of 1950 last fall at homecoming stated that every Friday, his mom or dad would go to the bank and get a lot of cash to be able to cash the checks of the lumber workers getting off work that afternoon. Then they would pay their charge accounts as they were able.

Russell Covin said Carter’s Grocery was on River Falls Street as well as Threatt’s Grocery and Donaldson’s Grocery where he used to get his candy cigarettes and push-up ice cream pops.

“There was a Burgess Grocery around the corner from the courthouse just below Covington Casket. They cut your own bologna and hog head cheese,” Esdaile Franklin wrote. Jenny Clayton posted that her grandparents lived in the back of the store where she liked nothing better that watching her granny make her chocolate cake with homemade chocolate icing. “I used to love to run around the store and get to play with the cash register buttons.”

Jerry Short says that “Nimble and Quick” owned by Coley Wambles was on the square. “We would go there before the ‘picture show,’ buy Milk Duds, and sneak them into the Martin Theatre.”

“Lamar and Larry Barton’s parents owned Barton’s Store on South Cotton,” said Antara Stanley Nowling. Alan Sanders replied,  ”As a kid, Max Barton used to tickle me by trying to count my ribs. Then he would slip me a couple of chocolate footballs and wink at Mom.” Eddie Williamson said “My daddy sold him Lance cookies, and I rode with him sometimes. Mr. Max would slice me a piece of hoop cheese that was on top of the meat counter.” Amy Russell Spurlin remembers that Barton’s was where her family went to get the steaks Daddy cooked on Saturday night. Jeanne Gomillion agreed that was a good place for steaks.

The C. J. Searcy Grocery on S. Cotton had a butcher shop where Swift Meats delivered hanging meat on hooks in the walk-in cooler according to John Eiland. “Mr. C.J., as he liked to be called, cut all the front and hind quarters with a hand saw. I would assist him but he would never let me mess with the expensive cuts. He paid me 50 cents per hour and by the time school started back in September, I had saved $180. I thought I was rich!”

Cindy Brown’s grandparents, Guy T. and Willie Langston, lived on McGowin Street right behind their store, Langston’s Grocery, on Dunson Street. A boy on a bicycle would deliver groceries in the neighborhood. “The store routinely bought from local farmers then sold the items making a small profit.”

Most memories of the neighborhood stores surround the penny candies, ice cream, chips, and cookies, the friendly store owners and their wives, and all the stories told there as people in the community dropped in to do business. The adults of today are the children of yesterday, and their memories are priceless. They remember those days when it was safe for children to go walking alone to the neighborhood stores and most of all, they remember the penny candy! Think we’ll have a fried bologna and cheese sandwich for supper tonight!