U.S. Congress candidate: ‘Stand with me’ 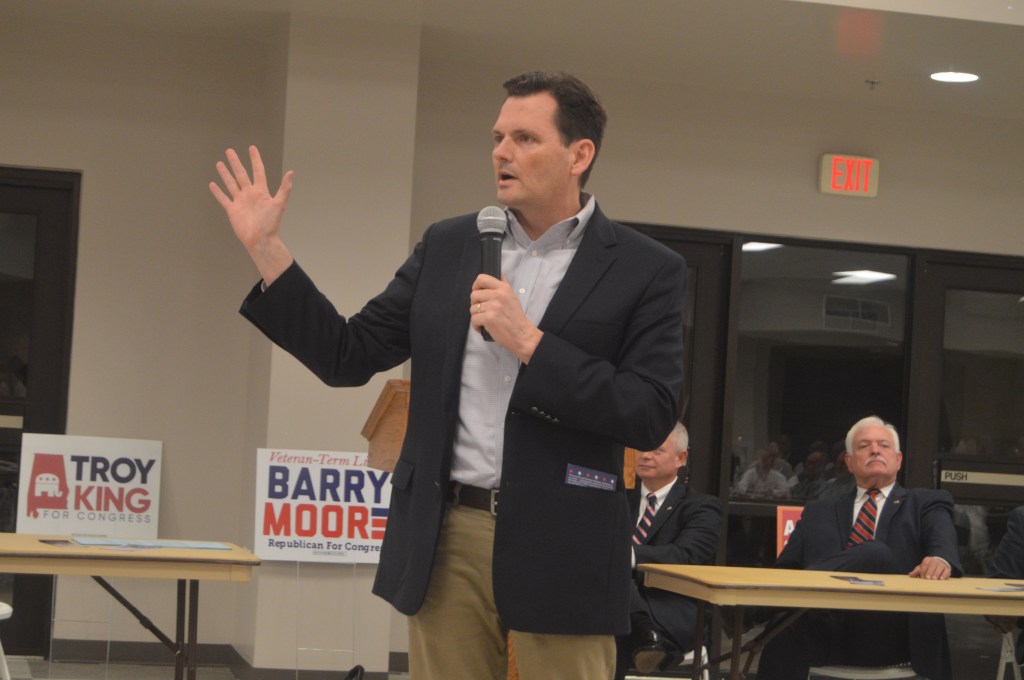 U.S. Congress Candidate Troy King is running for Congress because he said there needs to be people in Washington that have a backbone.

Last Monday, King addressed the citizens of Florala at a Republican Forum and said the reason he got into politics goes back to when he was a child.

“When I think about my mom, I think about growing up in Elba and I think about an important day when I was 10 years old,” King said. “When I was a little boy growing up in Elba, my dad sold real estate and when you sell real estate in Elba, you need a good economy because nobody knew every moved to town. In 1979, when I was 10 years old, we didn’t have a good economy. Interest rates were high and inflation was high. I’ll never forget my dad getting everybody around the kitchen table and telling us that there was just no money and that we couldn’t do things that we have always done. There was going to be no vacation or going out to eat. I looked at my dad and I said, ‘Well, who’s fault is that?’ He said, ‘Well, I think it’s the president’s fault,’ Then I asked how we could get a new one and he said, ‘Well, I guess you go vote for the other guy.’”

In 1979, King said he did not know that Elba was a Democratic stronghold in Alabama.

“I just knew that there was another guy running,” King said. “So, I rode off to Montgomery as soon as a box of brochures came in the mail for the other guy, who used to be the governor of California. I would take my Ronald Reagan brochures and knock on doors, they would answer and I would say, ‘Hello, my name is Troy King. Will you please vote for Ronald Reagan so I can go on vacation next year.”

King said he learned an important lesson that year.

While watching what is going on in America, King said he is fed up.

“I’m fed up because values that I believe are still in fashion folks in Washington think they are out of fashion,” King said. “For too long they have been telling us, ‘You can’t think that, you can’t believe that. Go stand in a corner. If you say those things we are going to call you names and beat you down,’ I don’t believe they are out of fashion at all. I come from a place where we still keep our Bibles open and our guns loaded. I come from a place where we stand for the flag and kneel for God. My friends, they have it backwards in Washington. We need people who have a backbone, who are willing to go up there and take a stand. I’ve never run from a fight and I’m not going to run from a fight in Washington.”

When King was Attorney General, he said he was the attorney general that brought prosecution against an abortionist who broke the law.

“We changed the law to protect unborn babies who were hurt when their mothers were assaulted,” King said. “I was struck when we pledged allegiance a while ago, because we talked about justice for all. Liberty and justice for all.”

King said there are some people who think they can buy the race for Congress.

“They don’t believe that justice is for all,” King said. “They think that you’re not paying attention and they can fool you. I’m here to tell you that it is no time to be putting profits ahead of patriotism. It is shameful that somebody would steal from veterans in this state. It is a shame that somebody would steal from military families and resort those resources back to themselves. When you drive around like I do, and you see billboards everywhere for one person, I want you to know where the money came from for that. Those signs may say, ‘Paid for by Jeff Coleman for Congress,’ and he may have written the check, but you and I paid the bill. It is money that he took from veterans in this country; from military families that he is moving. It is wrong. I don’t believe that seat is for sale and I believe it is time for somebody to say something and we take that seat back. If you want to believe in somebody that has values like us, stand with me.”