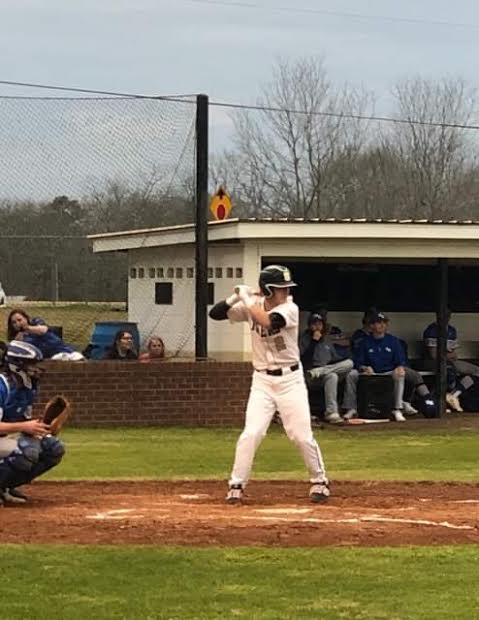 At long last, the first day of the 2020 baseball season arrived today.  Due to wet field conditions, the location was changed, and the start time was pushed back.  None of that made a difference as the Tigers (1-0) opened the Gabe Gunter era with a 15-4 win over the Flying Squadron (2-1).

SHS cranked out 11 hits to begin the season on a positive note.  Clay Ashberry struck out Cole Hobbs and Daniel Palmer on just six pitches.  HHHS then put two on, but Ashberry caught Morgan Norris looking to end the threat.  Straughn went right to work in its half when Logan Cobb and Dale Coleman both singled to put runners at the corners.  Adam Anderson followed suit and drove home Cobb from third.  Ashberry reached on a fielder’s choice to plate Coleman.  Abram Guilford picked up an RBI on a groundout to third.  A dropped third strike sent courtesy runner Mason Turner to the plate and made it 4-0 after one inning.  Ashberry needed only nine pitches to retire Highland Home in order in the second.  The Tigers roared with a five-spot in the bottom half.  Caleb Meredith reached on a hit by pitch and scored when Coleman was hit with the bases loaded.  Bryant Harper singled up the middle and hustled to the plate on a sacrifice fly by Ashberry.  Cobb and Coleman scored on a wild pitch and passed ball respectively.  Brady Hamrac delivered an RBI single to score Gabrien Dunn and extended the lead to 9-0 with two innings complete.  The Flying Squadron could not solve Ashberry in the top of the third.

Straughn pushed the lead out to 13-0 with a four-run, four-hit bottom half.  Harper doubled to start the frame and scored when Cobb singled to left.  Anderson sent Coleman to the plate before Ashberry launched a two-run homer to center.  Highland Home eluded further damage and carried that momentum into the top of the fourth.  J.T. Hoffman hit a home run to put the Flying Squadron on the board.  After reaching on an error, Peyton Dicks scored on an RBI groundout from Channing Beverly and cut the score to 13-2.  The Tigers responded in their half with two more as Jeremiah Adkison led off with a walk.  Adkison then stole second and raced home on an RBI triple by Coleman.  Coleman hustled to the plate on a wild pitch and pushed the margin to 15-2.  Once again, SHS loaded the bases but could not find the plate again.  HHHS fought back with a pair in the top of the fifth, but it was not enough.  A groundout to second closed out the two-hour contest.

The Tigers remain home next time out on Monday, February 24 with a visit from T.R. Miller.  First pitch is scheduled for 6:00 after the conclusion of the JV game.