Battle of Iwo Jima, 75 years after 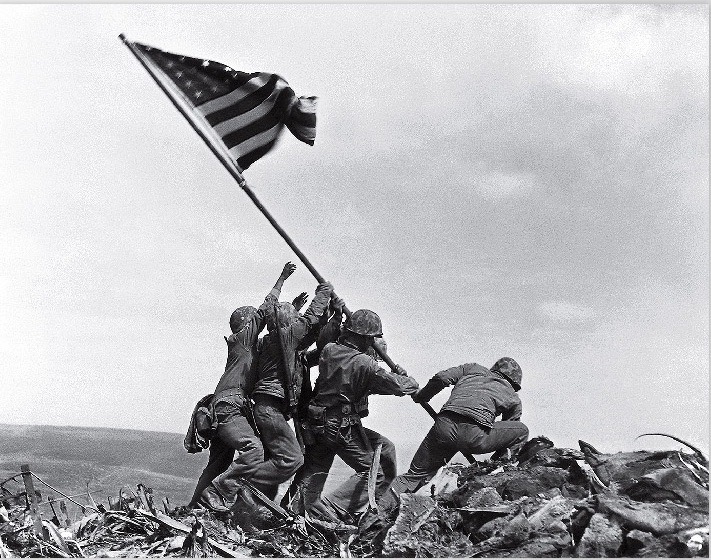 Iconic photo of US Marines raising the flag on top of Mt. Suribachi, Feb 23, 1945. Photo won a Pulitzer Prize for Associated Press Photographer, Joe Rosenthal. It was the 2nd flag raised that day, at Rosenthal’s request.

On Feb. 19, 1945, the United States Pacific Command, undertook the invasion of Iwo Jima, a small volcanic island, some 760 miles from Japan. Iwo Jima [Iwo To or sulfur island in Japan-ese]

Cove-red an area of  8 square miles and was about 5 miles long. It was filled with over 100 caves and covered in volcanic sand and ash. On the southwest tip of the island was Mt. Suribachi, a largely dormant volcano. The two primary invasion beaches flanked the west side of the island and there were two primary airfields in the middle of the island.

Operation Detachment was the code name for the invasion. The Japanese had sent Lt. Gen. Tadamichi Kuribayashi to organize the defense of the island. He set about building tunnels in a connecting network with the caves to both protect his troops and to circumvent the US lines. He also constructed hundreds of pillboxes and protected blockhouses that contained gun sites that were so well protected that only a direct hit could destroy them.

Gen. Kuribayashi used a different strategy than previously used on other islands. In other battles, the Japanese had heavily defended the coastline and fought the landing of troops from the very beginning. On Iwo Jima, Gen. Kuribayashi kept his soldiers in caves and tunnels and waited for allied troops to advance so that they could be ambushed and caught in a crossfire. In other battles, the Japanese troops were known for their often, suicidal banzai charges.

General Kuribayashi forbade his men from making these charges and instead asked that they kill at least 10 Americans from their hideouts. At the time of the invasion, the Japanese garrison numbered some 21,000 soldiers.

The Marines, under Maj.Gen Harry Schmidt, asked for a 10 day bombardment of the island by US Naval Forces prior to the invasion. The Naval commander of the Amphibious Support Force [Task Force 56], Adm. William H P Blandy, refused out of fear that his ships would not be able to replenish their ammunition before the actual invasion. They settled on a 3 day bombardment. After the war, Lt.Gen Holland M “Howlin Mad” Smith, who commanded the Expeditionary Force [which included Task Force 56], complained bitterly that lack of naval gunfire support had cost  the lives of many Marines.

Around  9 am. on Feb. 19, the Marines began their landings on the beaches. The 3rd, 4th and 5th Marine divisions totaled some 70,000 troops. As the first troops landed, they immediately encountered embankments of volcanic ash, some as high as 15 ft. Gen. Schmidt sent for Naval Construction Battalion units [Seabees], which landed with bulldozers and began clearing the ash. Amidst their work and the landing of Marines, Gen. Kuribayashi, directed his guns to fire on the invaders. By the end of the first day, the 28th Regiment had successfully isolated Mt. Suribachi from the rest of the island. Two days later, Japanese Kamikaze planes attacked the Navy ships located around Iwo Jima and caused severe damage to several. By Feb 23, the Marines had secured Mt. Suribachi where many of the Japanese guns had been located. The Marines raised the American flag twice that day. The second flag raising was for Associated Press Photographer, Joe Rosenthal. That iconic photograph won Rosenthal a Pulitzer Prize and became the everlasting symbol of Marine courage. Many years later, the Rosenthal photograph inspired the casting of a monument that would become The Marine Corps Memorial in Washington, DC. The monument weighs more than 20 tons and consists of a bronze casting of the Marines standing on a granite base, raising the flag over Mt. Suribachi. The monument stands over 78 ft. tall, with the Marines standing over 32 ft. tall, raising a 60 ft. tall flagpole. The flag flies 24 hours a day, 365 days a year. The monument was dedicated by Pres. Dwight Eisenhower on Nov 10, 1954, the 179th birthday of the Marine Corps.

After the flag raising on the 23rd, progress by the Marines was measured in yards per day until the 27th  when the airfields were captured. Even after that, the Japanese would slip out from their caves at night,  to attack behind the lines and plant mines on the roads previously taken by the Marines.  Finally, the Marines resorted to using flamethrowers to root out the Japanese from the caves and hidden bunkers.

As much as that sped up progress, the fighting on the southern and middle of the island remained at a stalemate until after March 2nd. On the northern part of the island, the Marines met such stiff resistance that Iwo Jima could not be declared “secure” until Mar 16.

The Marines still faced Gen. Kuribayashi’s stronghold on the northwestern tip of the island. On Mar 21, they destroyed his command post with explosives and sealed the remaining caves. With all that, some 300 Japanese attacked on Mar 25, killing 53 Marines and wounding 120.

On Mar 26, the island was declared “officially secure”. At that time the Army’s 147th Infantry Regiment was brought in as a garrison force. They soon found themselves under attack from the holdout defenders who had somehow managed to survive in a few caves and tunnels. For the next 3 months, the 147th combed the island using flamethrowers, grenades and satchel charges to dislodge the remaining Japanese. That tedious fighting killed another 1,602 Japanese soldiers. Iwo Jima’s unique system of caves and tunnels would always be remembered for the nearly impossible task that confronted the US, of clearing all the defenders and leaving the airfields safe and secure. It was not until Jan. 1949, the last two defenders surrendered. They had survived 4 years without being detected.

The American victory at Iwo Jima came at a terrible cost. The 36 day battle had resulted in 6,800 dead and an additional 19,200 wounded. The Japanese had over 21,000 soldiers on the island and only 216 were taken prisoner. Some of them were captured, only because they had been disabled or knocked unconscious.

Lessons learned at Iwo Jima were put in place before the next battle for Okinawa. For one thing, the bombardment of Okinawa before the invasion was the heaviest of any island in the Pacific war.  The strategic importance of taking Iwo Jima has long been a matter for debate among the US services, particularly the Marines. The long term significance of the capture of Iwo Jima as it related to the timeframe of the outcome of the war is still not settled. Marines, who suffered the heaviest casualties were not consulted in planning the operation. The capture of Iwo Jima did not provide the Army a staging base nor the Navy, a fleet base. The airfields were later used by B-29s flying bombing missions to Japan. Some returning B-29s that had suffered damage over Japan were able to land on Iwo Jima rather than ditch their aircraft or try to make it to another base for repair. Still, in light of the terrible loss of life, most historians have found it hard to make a case for the invasion of Iwo Jima.

The loudest protest over the tremendous losses at Iwo Jima came from Lt. Gen Holland M Smith. He was born in Russell County, AL and was both an Auburn [Alabama Polytechnic Institute- 1901] graduate as well as a University of Alabama Law School graduate [1903]. He joined the Alabama National Guard’s Calvary unit as a sergeant and practiced law in Montgomery for a year. When he was unable to secure an Army commission, he joined the Marines as a 2nd Lt. He spent time in France during WW I and by the end of the war, had been promoted to Major. Between the end of that war and the beginning of WW II, Smith served in various units with the Marines, including tours with the Fleet Marine Force at sea and as Director of Operations and Training on land. In that capacity, he was responsible for formulating much of the Marine Corps doctrine for Amphibious Operations. In 1942, he transferred to the Pacific Fleet Amphibious Corps. From that point on until  Aug 1944, Gen. Smith planned and commanded most of the amphibious landings conducted by the Marines.  In Aug 1944, he was named Commanding General, Fleet Marine Force, Pacific at Pearl Harbor. He was Commander, Task Force 56, the Expeditionary Force for the invasion of Iwo Jima. Gen. Smith did not command the allied forces that invaded Okinawa.

After the war, Gen. Smith wrote his memoirs of the Pacific war in a book, “Coral and Brass”. In the book, he was very critical of the Navy brass that had refused to give “his Marines” the necessary pre-invasion bombardment he thought they deserved.  His criticism of the Navy brass was so harsh, that they bought up most of his books. His book has been reprinted but original copies are very hard to find. On the dust jacket of his original book, is a quote from Gen. Smith that is legendary:

On Marine amphibious skill – “Given adequate naval and air support, they [the Marines]

could go ashore on any beach and take any objective. I could have landed them in the

The heroism of the US fighting men on Iwo Jima is unmatched in the annals of war.  The Congressional Medal of Honor was awarded 27 times to Marines and Navy Hospital Corpsmen

After the battle, Fleet Admiral Chester Nimitz offered this tribute, “Among the men who fought on Iwo Jima, uncommon valor was a common virtue.”

[Sources: The Encyclopedia Britannica, The US Department of the Navy, History.net,  Wikipedia and The United States Marine Corps]

‘In God We Trust’ history and motto of our country

Memories of a perfect day linger

The key to a successful newspaper