ESPORTS MAKE IT TO FLORALA 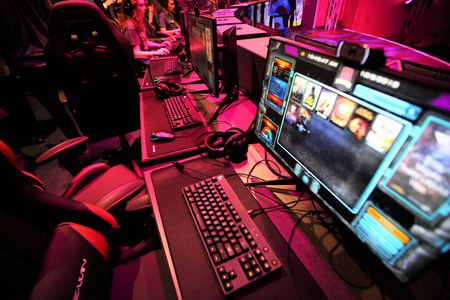 A group of Florala students banded together to form the high school’s first-ever Esports team.

In December 2018, Esports became the first new sanctioned varsity sport since bowling was added about four years ago.

FHS Esports coach Melissa Windham said the students were the ones that started the push to get the sport at FHS.

“Esports have been a thing in the state for a while,” Windham said. “Some of the boys had heard about it and I’m sort of the resident nerd, so to say, so they immediately came to me and asked if they could form a team.”

The students don’t practice during regular school time, but they still get a lot of practice time in according to Windham.

“We try to practice every Wednesday,” Windham said. “We have a Wildcat period where the students are able to practice.”

As far as traveling for games go, that doesn’t happen until post-season games.

“You play at your school during the regular season,” Windham said. “They give you a game code for a program and you just play the rival school online. For example, we played Stanhope-Elmore out of the Prattville area on Tuesday and both teams didn’t have to travel.”

Windham said there are several benefits to Esports that most people don’t think about.

“Esports are very team-oriented,” Windham said. “It is building leadership in the older boys, because we have two seventh graders and the older guys have been helping them the entire way. There is also a lot of problem-solving that goes along with the game. Since we started I have had some kids come up to me that want to join that have a little bit of a discipline problem. I think having them on the Esports team would give them an incentive to act better and class and achieve better grades because they are working towards something.”

Currently there are no classifications for the schools, which Windham said, to the students is a little daunting.

“Stanhope-Elmore is a 6A school and we are 1A,” Windham said. “There are no classifications when it comes to this so everybody plays each other. It was funny because we play Hoover High School next week and the kids were freaking out because they had to play Hoover.”

Windham said the goal for this year’s season is to see the boys enjoy the game.

“I know it’s going to be a little stressful because some of the boys are really competitive,” Windham said. “I really hope this is the beginning of a long term program. Ever since I got into this sport, a lot of people don’t realize the benefits that could come from it. I mean, even colleges now are offering scholarships for Esports.”

PlayVs, based out of Los Angeles, is contracted by the NFHS to provide the digital infrastructure needed to support the high school esports in Alabama and beyond.

The schools will challenge each other in three games – Smite, League of Legends and Rocket League. Smite and League of Legends are considered “multiplayer online battle arena” games in which players are pitted against one another in virtual competitions similar to a capture-the-flag contest. Rocket League is a soccer game played in rocket-powered cars.