Remember When: The don’t’s of choosing a husband in 1937 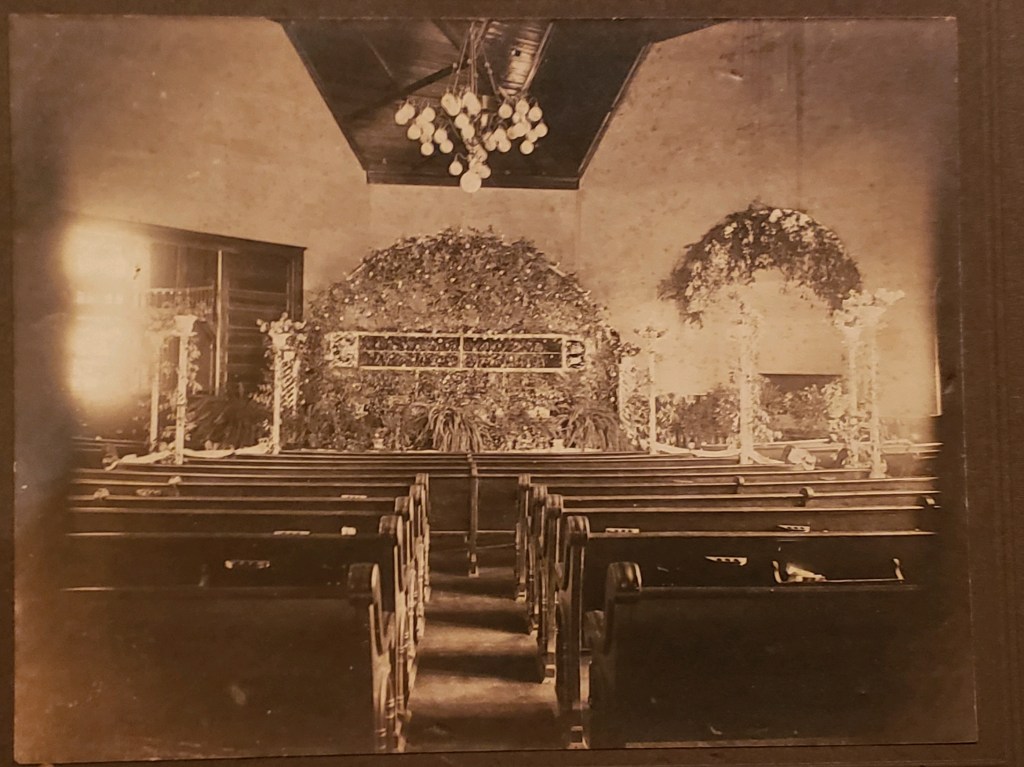 Scene from the wedding of Leolive Benson and Worth Gantt in the old downtown First Baptist Church in the 1920s.

The year 2020 is the 100th anniversary of the ratification of the 19th amendment to the U. S. Constitution granting women the right to vote. The length of dresses became shorter in the 1920s and hairdos were bobbed and finger-waved. Moving pictures replaced the silent movies and people flocked to the “cinema.” The aftermath of World War I brought modernity to the population. During the Roarin’ Twenties decade, there was a huge impact on society when women not only gained the right to vote but also learned to drive, when technology was advanced with the invention of electrical appliances, and when the telephone and radio became commonplace in the households. The era was also referred to as the “Golden Twenties.”

A few tips on “Choosing or Selecting a Husband” appeared in The Tuscaloosa News in December 1937. As amusing as this advice was to the women of the day, there is still a lot of truth

in these words of wisdom today that I will summarize following the eventful week of Valentine’s Day.

“Girls, if you want to be happy though married, DON’T marry a man who have never made his own living for the chances are ten to one that he will never be able to support you.”

“DON’T marry for money, but don’t marry without any of it. There is no magic in the marriage ceremony that causes a woman to grow feathers and live on thin air. You will find you are just as hungry and need clothes as much as a Mrs. as you did a Miss. Handsome ne’er-do-wells and temperamental lads who can never hold down a job are fascinating as sweethearts, but they are washouts as husbands.”

“DON’T marry a tyrant. A girl doesn’t mind a little kowtowing to a man during the days of courtship, but it gives a wife an acute pain in the neck with a husband who thinks he is the only one in the house who has a right to an opinion, and one that she has to ask his permission to even take a long breath. So when the boy friend tells you what you should wear, forbids you to use lipstick, and informs you generally just where you get off, alight on the farthest side from the altar.”

“DON’T marry a tightwad. Here is nothing that rifles a woman so much as to have to work for her board and clothes and then chloroform her husband before she can get the price of them out of him. Watch the lads who take you out and pass up the one who has a lock on his pocketbook and who never tips on principle.”

“DON’T marry a selfish man who always puts his pleasure and comfort above yours. If you do, you will be nothing but a doormat for him the remainder of your life. You will wear hand-me-downs while his clothes come from an expensive tailor. You will stay at home at night with the baby while he steps out to night clubs. When a man takes you to a jazz concert when he knows you are pining to hear the symphony orchestra, your guardian angel is hanging out a red lantern of warning.”

“DON’T marry an arguer. Pass up the man who is “agin” everything on earth and to whom you cannot even say it is a pleasant day without starting something. He will object to your clothes, to your friends, to your belonging to clubs or not belonging to clubs, to going out in the evening or staying at  home, and life with him will be one long debate that will keep your nerves raw and your temper on edge and will make you long for an early death or divorce.”

“DON’T marry a vain man. If you do, you will have to work like a coal-heaver keeping his ego inflated. The minute you stop telling him how big and strong, handsome and wonderful, wise and witty he is, he will stray after any woman who will ‘understand and appreciate’ him.”

“DON’T marry a philanderer. The man who was born with a wandering foot has a congenital affliction that no woman can cure. Don’t believe him when he tells you that he has found his ideal at last in you. If you do, he will tire of you and break your heart, because it isn’t in him to be faithful to anyone. Speed him on his way and save yourself.”

“DON’T marry Mother’s fair-haired boy, the one who has been spoiled and babied, humored, and waited on hand and foot by his mother. He expects his wife to keep on spoiling, babying, and humoring, and picking up after him. He will always be the most troublesome of your children, and you will get awfully tired of trying to get along with a grown man who acts like a 2-year old. Unless you think you will enjoy a lifelong career as a nursemaid, don’t undertake the job.”

“DON’T marry any man who isn’t what you want in a husband to start with. Don’t think that you can change any man’s tastes and habits and character after you get him. Nature and his mother attended to him some twenty-odd years before you ever saw him. Lots of women believe they can put pep in the pepless, quench the thirst of drunkards, and domesticate the roamers, but the name of those who succeed in doing so could be written on a silver dime! Don’t attempt the impossible.”

Well, ladies, pass these tips along to the younger generation and encourage them to Remember When their great grandmothers’ generation might have taken these words to heart!

Remember When: Valentines Day 100 years ago