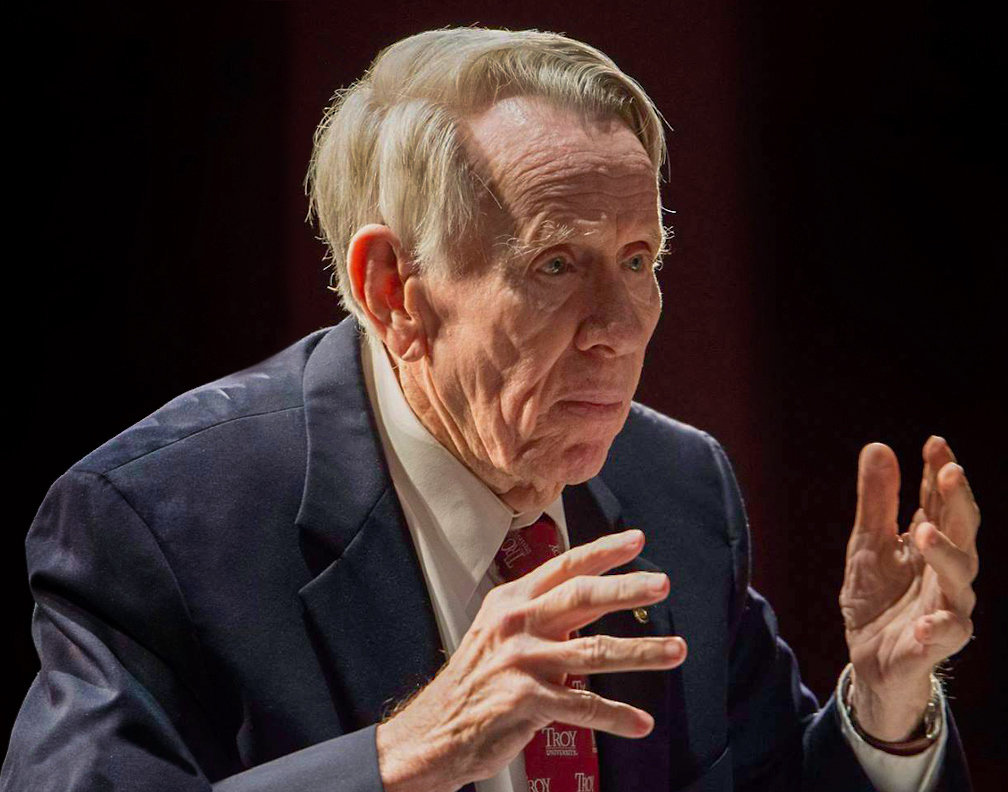 Long passed away at his home on Monday evening at age 94 after a brief illness and more than a year of declining health.

LBW Community College ensemble director and music professor Johnny Brewer said he learned as much or more about life than he did about music from Long.

“Dr. Long loved Troy and everyone he met who came to Troy,” Brewer said. “He believed the best about all his students, and his students knew he cared about them more than himself. As for me, personally, I learned as much or more about how to live life as I did about music and band directing. He was fond of saying ‘Queen of England is just as good as garbage collector—but no better.’ The man was amazing.”

Opp High School Band director Dillon Worley was not a student directly under Long, but said he still benefited from his teaching at Troy University.

“While I was never under the direct teaching of Dr. Long during my college years, I was fortunate to have plenty of moments with him during my time in the Sound of the South as well as the Troy University Symphony Band,” Worley said. “If there was one thing Dr. Long shared with the students in the music program at Troy that impacted me the most, it was that what we are doing as musicians and as music educators is one of the most important jobs in the world. Each encounter I was able to have with him during rehearsals he would always make it a point to let us know how much we mattered.”

Worley said over time he has finally understood why Long was so persistent about how important musicians and music educators were.

“At the time, I couldn’t understand why he was so persistent about how important we were in our field, but now, as a band director, I can understand it completely,” Worley said. “Oftentimes our job can be a thankless one and the work we pour into our students can’t be seen immediately. He knew that from experience, but he also had been alive long enough to see the benefits of his own hard work and the hard work of his students pay off. He will be greatly missed by all, but his legacy will live on for years to come.”

“Dr. Johnny Long has been an icon of Troy University and band music throughout the world. His leadership, not only of the Sound of the South Marching Band and the University but also to generations of musicians, conductors and music educators across the globe, has made a significant impact in bringing our world and our cultures closer together,” said Chancellor Dr. Jack Hawkins, Jr. “He promoted the very best in his students, in music and in understanding of our world. His death leaves a void in leadership in many areas, and his friendship will be deeply missed.”

Long, who served as director of bands at Troy from 1965-1996, was a past president of the American Bandmasters Association and is a member of the National Band Association’s Hall of Fame of Distinguished Band Conductors and the Alabama Bandmasters Hall of Fame.

In 2010, Dr. Long was named honorary president of the National Band Association, and in 2011, was the subject of a feature piece for CBS Evening News on his continued involvement as conductor of the Southeast Alabama Community Band.

In 2012, he was elected Honorary Life Member of the American Bandmasters Association.

He continued to serve the University as Director of Bands Emeritus and Professor of Music Emeritus.

A native of Guntersville, Dr. Long was a member of Omicron Delta Kappa honor society, Phi Delta Kappa, Kappa Kappa Psi honorary band fraternity, Phi Mu Alpha, Delta Chi fraternity and Phi Eta Sigma. He was an active guest conductor, speaker, clinician and adjudicator through the United States, Europe, Canada and Mexico. In 2005, he was honored by the Alabama Music Educators Association with its Barbara Odom Award for lifetime achievements in music education, and holds the Distinguished Eagle Scout Award from the National Eagle Scout Association.

During his 31-year career at TROY, Dr. Long also served the University in various capacities, including chair of the music department, dean of the School of Arts and Sciences and dean of the School of Fine Arts. Two buildings on the Troy Campus bear his name – John Maloy Long Hall and the Hawkins-Adams-Long Hall of Honor, which houses the National Band Association’s Hall of Fame.

Under his direction, the University’s “Sound of the South” marching band represented the state in two presidential inaugural parades (Nixon and Reagan) and served as the official band for two presidential visits to Alabama.

“Dr. John M. Long was the Director of Bands from 1965 – 1996. During that time, he built the band program into one of national prominence and quality. He has produced thousands of band directors and musicians who have gone on to careers throughout the United States in all areas of music and music education,” said Director of Bands Dr. Mark Walker.

“Dr. Long loved his students, family, friends, and Troy University. His influence is evident in band directors throughout the country. He will be sorely missed and forever remembered,” he said.

He served in the U.S. Army as a bandsman in World War II, serving in Iraq, Egypt and elsewhere in the Middle East.