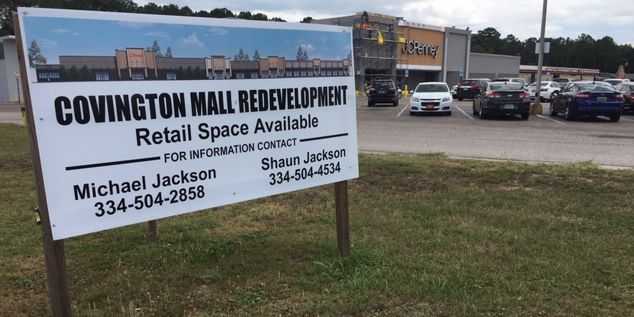 The Andalusia City Council approved a resolution for the city to enter into a development agreement granting a 2 percent, 5-year sales tax rebate for the Covington Mall.

“The Jackson brothers have successfully negotiated with two national retailers and this resolution authorizes us to enter into a development agreement with them,” Thompson said. “The only thing different about this agreement from different agreements we have done in the past, is that we are going to include a prepayment. They are already working on the site and we will see some dramatic improvement.”

With the city’s assistance, the Jackson brothers will work on the parking lot, completely change the drainage system, resurface, relandscape and light up the parking lot.

“They are also executing a promissory note with us to guarantee the prepayment of the sales tax,” Thompson said. “We will prepay them $600,000, which they will use immediately for the renovation project that is going on out there now.”

At the end of the year, the Jackson brothers said they have spent a little more than $3 million on the site in preparation for new retailers.

“We did have some great news that came in yesterday,” Jackson said. “A national retailer is approved and is coming in. They want to be in, hopefully, by Aug. 1. We should have the lease finalized in 10 days. They are the first of really three more following. We have two on the line right now that we will be disclosing as soon as possible, but we want to get those leases in hand to make sure that we are covered there. The retailer we got in was the ringleader to get the other ones in. Everyone that we have talked to has been contingent on this retailer. With that one being approved, it really sets us up to be in good shape. Now, it should just have the domino effect.”

Jackson said within the next couple of weeks, he expects to be setting up leases with other national retailers.

Without the city’s help, Jackson said they would not have been able to pull off getting the national retailers attention.

“Hats off to the city,” Jackson said. “It definitely is not easy trying to bring businesses to Andalusia, Alabama. They want to know how many rooftops we have within a 3-mile radius and that’s all they care about. The city has done a great job getting out there and really breaking down the numbers and showing them what truly exists here. I think this is the first of many to come. I truly see this being a destination stop on the way to the beach that is really going to draw a lot of attention.”

Thompson said the two retailers coming would be retailers that Andalusia citizens would be extremely happy about.

“This puts us on a level that quite frankly we have worked to be on for a long, long time,” Thompson said. “It will give us national and regional recognition showing that work has been going on here for many, many years. The work that we have done to show the market potential here to retailers will finally show retailers that it exists. A lot of big things are happening in Andalusia, Alabama and this is just the beginning.”

Council member Kennith Mount thanked the Jackson brothers for being so easy to work with.

“I had not met the Jackson brothers until today,” Mount said. “But from my perspective, thank you for working with the city very well. That has not always been the history. So, all I can say is kudos to you guys.”

Council member Will Sconiers said it is refreshing to see citizens contribute something back to Andalusia.

“It is exciting to be working with Andalusians, and not somebody from Mobile, Atlanta or Birmingham,” Johnson said. “We are dealing with home folks. That tells me a lot about the future, because you guys are going to care more about it. This is your home.”

A decade in business