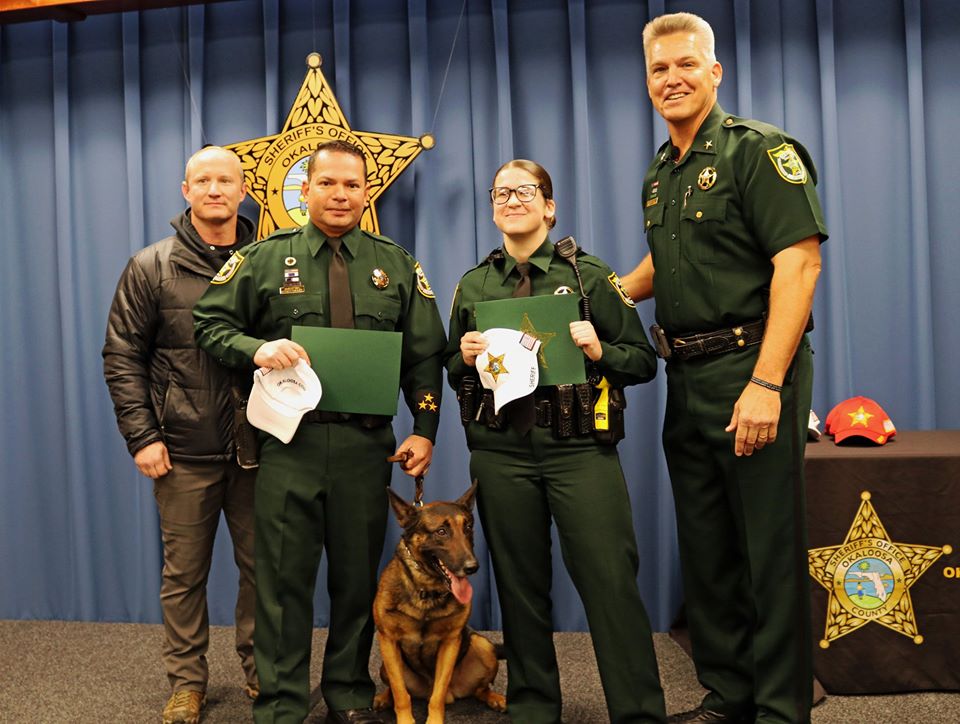 Red Level alumna Lacy Stinson received a certificate of commendation from the Okaloosa County Sheriff’s Office after making an arrest on her way home from work.

On February 3rd, Stinson was on her way home and stopped at Bamboo Sushi Restaurant to pick up her order. While in the drive-thru a manager approached her and stated he believed there was a man breaking into vehicles in the parking lot.

Stinson drove around the business and observed a white truck with the doors open and multiple items strewn across the gravel. She approached and observed a white male, sprawled across the driver’s seat, who looked like he was searching for something. She identified herself but he didn’t respond. She then approached the driver’s side and attempted contact again. The male yelled “I have a gun, back away, I don’t want to hurt you.” Deputy Stinson drew her weapon and ordered him out of the vehicle. The male refused and repeatedly stated, “I have gun in my right hand, I am not getting out because I know you will shoot me.”

Sgt. D.J. Folley who was also on his way home, heard the call and responded to the scene. Upon arrival, Deputy Stinson briefed Sgt. Folley on the situation. The suspect then brandished a large bowie knife while stating he was also armed with a 9mm handgun. Sergeant Folley continued to coordinate the scene and direct responding officers.

K-9 Deputy Johnathan Duenas arrived on scene, assessed the situation and recommended to Sgt. Folley the use of K-9 “Axel”. They devised a plan to utilize K-9 “Axel” to take the subject into custody.

At one point, the suspect became highly excited, screaming at deputies and leaned out of the vehicle using his hands to gesture violently. Sgt. Folley observed he didn’t have a knife or gun and signaled to Deputy Duenas to release K-9 “Axel”. Axel swiftly pulled the suspect from the truck and was taken into custody.

Because of the quick reaction and precision of this team, this incident was able to be resolved safety and swiftly without further injury to the suspect, the public and the law enforcement officers on scene.