Tigers roar from 9 down to outlast Flying Squadron 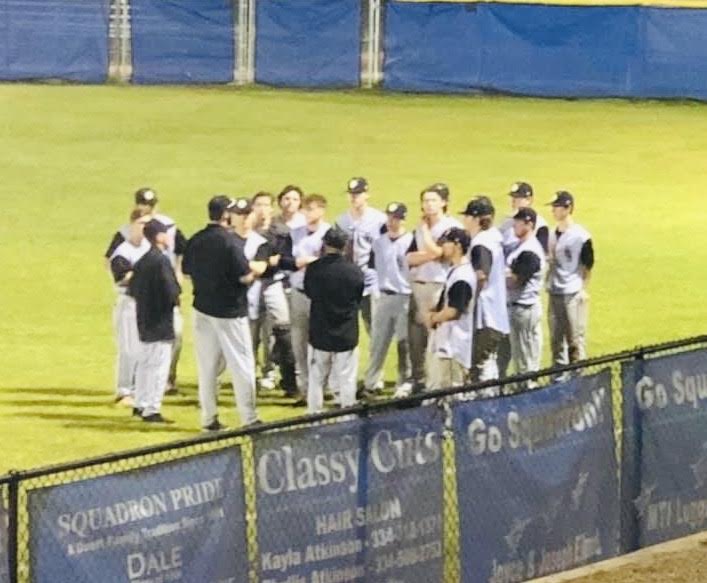 Never say never was an understatement in an incredible baseball contest on the road, Tuesday.  Straughn (4-3) erased a seven-run deficit that later grew to nine and held on for a 17-14 win at Highland Home (5-3) in eight innings.  The win snapped a three-game slide and tied last season’s win total. Will Castle worked fast in the top of the first and needed only seven pitches to retire the side.  After Dale Coleman got a groundout to begin the bottom half, Daniel Palmer and JT Hoffman singled. Peyton Dicks was hit by a pitch to load the bases. Morgan Norris drove home Palmer as Stephen Ponder was beaned to bring in Hoffman.  Coleman caught Channing Beverly looking for the second out before HHHS added five more runs and took a 7-0 lead after one. Gabrien Dunn and Brady Hamrac got on with two outs in the second, but Castle held SHS in check. Coleman countered with a scoreless inning as the score remained the same.

Mason Turner took a hit by a pitch to open the third and advanced to second on a passed ball.  Logan Cobb reached on an errant throw to put runners at the corners. Adam Anderson lifted a sacrifice fly to plate Turner and put the Tigers on the board.  Following a walk to Coleman, Cobb scored on another error as courtesy runner Samuel Hammett darted home on a wild pitch to cut the deficit to 7-3. Castle got the next two batters before the Flying Squadron extended their margin to 12-3 with three frames complete.  Straughn began its comeback bid in the fourth with a two-out rally. Gabrien Dunn began the frame with a scorching double to the gap in left-center for the first hit. Caleb Meredith earned a one-out walk, and Cobb took another beaning to fill the bases. Anderson delivered a two-run single to bring home Dunn and Meredith.  Cal and Clay Ashberry were both plunked as Jackson Joyner lashed a huge knock up the middle and made the score 12-8. Cal Ashberry then retired Highland Home in order on just 10 pitches.

Hamrac was hit by a pitch to start the fifth and stole second.  After a balk, Meredith laced an RBI single to right and plated Hamrac.  Abram Guilford then hit a rocket that knocked the field umpire down. Controversy ensued when a dead ball was not called, and Guilford was instead called out at first.  Despite the missed call, Cobb drove in Meredith on a grounder to close the gap to 12-10. Cal Ashberry kept up his dazzling work on the mound with another 1-2-3 inning off six pitches.  SHS drew a run closer in the top of the sixth. Joyner singled to put runners on the corners as Dunn brought home Hammett to make 12-11. HHHS was able to muster a two-out single in the home half, but Ashberry stopped the rally there.  That set up a crazy seventh inning from both sides.

Guilford was beaned before Cobb singled and put runners at first and third with two down.  Cal Ashberry drilled a liner into left where the ball was misplayed. Guilford scored the tying run as Cobb touched the plate to give the Tigers their first lead at 13-12.  Hammett stole second and made it 14-12 thanks to a clutch RBI single from Clay Ashberry. More drama unfolded in the bottom half as Dicks was called out by the home plate umpire on a groundball to second.  The field umpire came in and overrode the play stating it was a foul ball. Dicks ultimately walked and Norris tied the game at 14-14 with a liner to right. Norris made his way to third, but the Flying Squadron was forced to settle for the tie.  Hamrac singled in the eighth and scored when Meredith dropped down a bunt, and the ball sailed into right field. Guilford was hit by a pitch as courtesy runner Jared Hawkins moved up 90 feet on a steal. Cobb added some much-needed insurance with a sacrifice fly to deep center and scored both Meredith and Hawkins for a 17-14 advantage.  Cal Ashberry promptly got two groundouts to first and sealed the three-hour 13-minute contest with a strikeout.

Straughn now turns focus to the start of area play on Thursday, March 12.  First is a trip to Slocomb with first pitch scheduled for 5:00.