Remember When: The Flu Pandemic of 1918 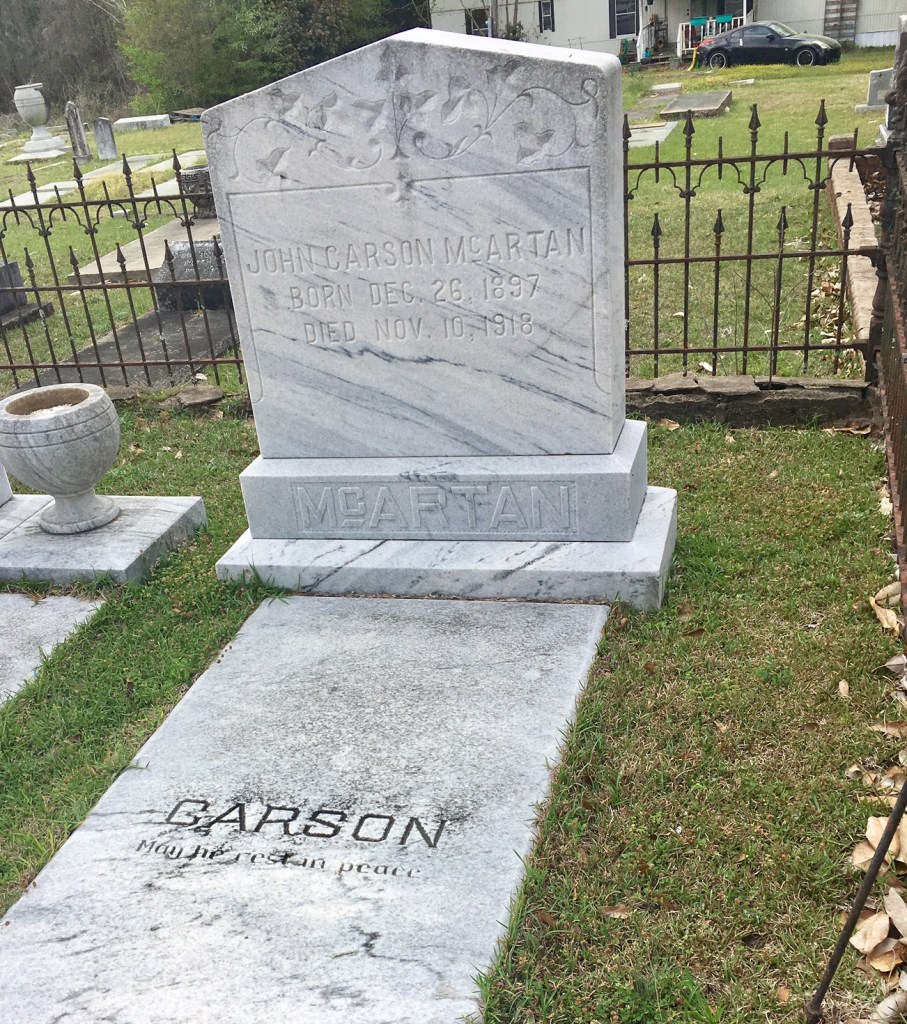 Shown is a grave at Magnolia Cemetery from the Spanish Flu pandemic of 1918.

In 1918, typical newspaper headlines all over the country read like this – The Seattle Daily Times, CHURCHES, SCHOOLS, SHOWS CLOSED, Epidemic Puts Ban on All Public Assemblies.

For those of you readers who haven’t been saturated with information about the “flu” of 2020, the Coronavirus, you may be interested to know a few facts about the Spanish influenza epidemic of 1918 back a century ago. I perused the old newspapers on the internet and found many similarities of “then” and “now.”

Cartoons, ads, flyers, banners all encouraged and warned the public with messages such as “Don’t kiss your sweetheart while the Spanish flu plague is on.” Other posts in places frequented by people on the street cautioned passers-by, “DON’T SPIT on the floor, the sidewalk, the street cars, or public places. (Wonder if that is when all those spittoons were placed in the courthouse?) Don’t sneeze or cough in anyone’s face. Use your handkerchief to cover nose and mouth.”

October 11, 1918 – The Andalusia Star – “SPANISH INFLUENZA – THREE-DAY FEVER – What is Spanish Influenza? The disease now occurring in this country resembles a very contagious kind of ‘cold’ accompanied by fever, pains in the head, eyes, ears, back, and a feeling of severe sickness. In most of the cases, the symptoms disappear after 3 or 4 days. The patient then rapidly recovers. In some cases, pneumonia and meningitis develop.”

“Epidemics of influenza have visited this country since 1647 when this first epidemic was brought here by the Spanish explorers from Valencia, Spain. Since that time, there have been numerous epidemics such as in 1889-90. ‘Flu’ started somewhere in the Orient, spread to Russia, and thence over practically the entire civilized world. Three years later, there was another flare up when the King of Spain suffered an attack of ‘flu’ which gave rise to the nickname,  ‘Spanish flu!’ The Germans mentioned the disease as occurring along the eastern front of World War I in the summer and fall of 1917.”

Many sources claim that flu originated in mid America at a U. S. Army camp at Fort Riley, Kansas where soldiers were training for World War I, and it was carried thereafter to Europe. 500 million people were eventually infected or 27% of the world’s population.

October 1918, the time frame of the second most lethal wave, was the deadliest month in the U. S. history with 195,000 fatalities from the influenza epidemic. My father Charles Bass was born October 21, 1918 in LaFayette, Georgia during the peak of the ‘flu.’ His uncle Joe Bass of Rome, Georgia died about that time of the ‘flu.’ My grandmother used to say that some of the family couldn’t even go to Uncle Joe’s funeral.

The Andalusia Star – October 11, 1918 – “Drastic steps to fight influenza have resulted in unnecessary alarm on the part of citizens. Dr. Welch of the state health department says a panic at this stage is uncalled for. Alabama teachers who have been laid off because of the epidemic should receive salaries just as though they were working.”

October 29, 1918 – “School has been closed for some time due to the flu epidemic… Wonder what is the reason we never hear from our Opp, Route A reporter? Guess what? The writer has the flu! … The Zion Baptist Association has been postponed on account of the flu… Civics Club president, Mrs. Kate M. Perenot, expects to call a meeting as early as possible, because there has been no meeting on account of the influenza situation.”

The Washington (D. C.) Herald – October 23, 1918 – “No reformer (woman suffragette) has yet blamed the ‘flu’ epidemic on the low cut waists (of dresses) and silk stockings of the fool wimmin folks!”  (Even back then there was always someone to try and blame for the pandemic– just like today, China, the president, the Democrats or Republicans!).

Elmira (New York) Star Gazette – October 24, 1918 – “ZONES FOR DOCTORS – Philadelphia was described recently by a visitor as ‘a regular morgue.’ The most common sight on the street was a motor truck load of coffins. There was literally at the height of the ‘flu’ epidemic not enough coffins available to bury the dead.”

“In that distressing situation, the city health director made a suggestion which is beginning to receive respectful attention there and elsewhere. Instead of doctors rushing all over the city to attend patients in widely scattered localities, if the work was properly organized, every physician might be able to take care of twice as many people, and the attention given them would be far more prompt and regular.”

“It was therefore proposed a zoning system assigning each doctor a definite district and restricting his work to that district. It would go against tradition since the present system is of old standing. Families generally want the physician to whom they have been accustomed, and the physician likes to keep his old patients.”

Franklin City Times – December 4, 1918 – “If you demand reward for all you do, you will have none coming to you when you get ‘up yonder.’”

The Andalusia Star – December 12, 1918 – “The ‘flu’ epidemic has about subsided in and about our little town.”

December 10, 1918 – “J. W. Shreve & Co. – ABSOLUTE FINAL CLEARANCE – Prices that almost stagger belief!  – Bad weather combined with the ‘flu’ epidemic cut our November business below the average and has left many fall and winter goods that ought now to be in use untouched on our shelves.”

The Montgomery Advertiser – December 24, 1918 – “AVOID FLU & PNEUMONIA BY STERILIZING NOSE – The London Epidemic of 1891 proved Eucapine Salve is the most effective preventative known. Get out your jar. If you have none, go to the nearest drug store at once and get a family jar of this well-known nose and throat sterilizer. Sniff morning and night whence it will spread to the larynx and tonsils thus sterilizing the nose and throat.”

“The salve contains just enough camphor, menthol, and oil of white pine to make it soothing, healing, and delightful to use. It was originally designed for mother’s use with her children in colds, croup, and to prevent pneumonia. Any druggist can supply you for half a dollar.”

The death toll of the Spanish Flu of 1918 now referred to in most medical circles as the 1918 Influenza Pandemic resulted in between 17 million to as many as 100 million deaths worldwide. That flu lasted from January 1918 to December 1920 although the worst time graphed on the “curve” or the peak was in October and November of 1918 when two young Andalusians died when they were home from college for Thanksgiving. Mary Hill Randle was 18 and John Carson McArtan was almost 21 years of age. They both lie in their family plots at Magnolia Cemetery.

The single factor, it is still believed, which accounted for the deaths of most of the victims was caused by poor hygiene that promoted bacterial superinfection although people coming in contact with others spread the germs far and wide. Today in 2020, we are fortunate to have so much media attention to promote social distancing, self-quarantine at home, and good hygiene which emphasizes the constant washing of hands and removing oneself away from public gatherings.

In the meantime, if and when you go to the courthouse, don’t spit! Those spittoons of long ago are gone from the scene. Oh, I think we have one on display at the Three Notch Museum. I Remember When reading about Dr. Wilbur Sawyer with the World Health Organization of New York City who came to Andalusia in 1924 to study hookworms and malaria. He photographed the new Covington County Courthouse and wrote these words home to his wife, “You can build a marble courthouse, but you can’t keep off the spit!”

Remember When: The history of Johnson Park