McCampbell was awarded Medal of Honor 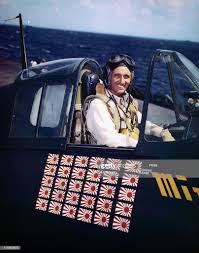 David McCampbell was the leading Navy Ace during WW II, having been credited with shooting down 34 Japanese planes and another 21 on the ground. McCampbell was a native of Bessemer, Al.

He was born on Jan 16, 1910 to Andrew Jackson McCampbell and Elizabeth Perry McCampbell in Bessemer. Sometime in the early 1920s, the family moved to West Palm Beach, FL. David was sent to Staunton Military Academy in Virginia to finish his schooling. After graduation in 1928, he enrolled at Georgia Tech for a short time before receiving an appointment to the U S Naval Academy at Annapolis, MD. He graduated from the Naval Academy in 1933. Because the Navy was having trouble funding it forces, McCampbell was commissioned an Ensign in the Navy Reserve and not placed on active duty. He returned to Alabama for a short time before he was called to active duty. From 1934-1937, McCampbell served onboard the USS Portland [CA-33], a Navy Cruiser. From the Portland, he was sent to flight training at Naval Air Station Pensacola. In Apr 1938, he received his Navy Wings of Gold and was assigned to VF-4 [Fighting Squadron 4] aboard USS Ranger [CV-4]. In 1940, he reported aboard the USS Wasp [CV-7] which was operating in the Atlantic at the time. McCampbell served as LSO [Landing Signals Officer], a demanding job of giving hand signals to pilots landing on the carrier. Nicknamed “Paddles”, because of the yellow hand paddles they used, the LSO helped guide the pilot on the final approach to an arrested landing [or to a “wave off” if the approach was not safe].

After transferring to the Pacific Fleet, the Wasp was sunk by a Japanese submarine while sailing near Guadalcanal on Sep 15, 1942. Having survived the sinking of the Wasp, McCampbell was sent to Melbourne, FL. for rest and further training.

In early 1943, McCampbell was given command of VF-15, a fighter squadron flying Grumman F6F Hellcats. In spring 1944, he took command of Air Group 15, and took them aboard the USS Essex [CV-9]. The Air Group consisted of all the planes onboard Essex, including fighters, dive bombers and torpedo planes.

Essex and Air Group 15 would find itself in the middle of the US island hopping campaign across the Pacific. David McCampbell first saw combat on May 19, 1944. As CAG [Commander Air Group 15], he flew his F6F Hellcat against the Japanese in an air battle near Marcus Island.

Although he didn’t shoot down any enemy planes, McCampbell’s plane was so damaged by bullet holes that it had to be pushed over the side. His first shootdown of a Japanese plane happened on Jun 11, while flying air support over Saipan. On Jun 19, participating in what was called the first and second Battles of the Philippine Sea, Air Group 15 was part of some 1,300 aircraft from both sides that took to the skies. The US had about 905 aircraft aboard 15 Navy carriers. McCampbell , leading his air group, took on 109 Japanese planes with his and 10 other F6Fs. In a battle lasting 6 minutes, the Fabled 15 [as they were called], defended the Essex until they were joined by 43 other Hellcats. During the battle, McCampbell had 5 confirmed kills, before he had to return to the Essex for more ammunition. After rejoining the fray, he quickly picked up 2 more kills. The other flyers from Air Group 15 accounted for another 61 enemy aircraft, far more than any other Air Group. Before the day was over, some 275 Japanese aircraft had been destroyed with the loss of 25 US aircraft. This one sided aerial battle, called the Battle of the Philippine Sea, became known as The Great Marianas Turkey Shoot. McCampbell’s tally was by far the largest of the day.

David McCampbell’s greatest performance took place on Oct 24, 1944, at the beginning of the Battle of Leyte Gulf. He and his wingman, Roy Rushing, ambushed some 60 Japanese planes returning to Manila from a strike. From high above, the two watched the enemy planes form into a tight formation. “That’s when we went to work on them”, said McCampbell. Before his fuel and ammunition became low, McCampbell had downed 9 Japanese planes. His fuel was so low that he had to land on the USS Langley [CV-1], because the Essex’s deck was not clear. “When I tried to taxi forward after landing, I gave the throttle full gun forward, and the engine conked out on me. ….They had to push me out of the landing area…I found out from a mechanic that my starboard outboard gun only had 6 rounds left in it”.

From Apr to Nov 1944, Air Group 15 saw 6 months of battle duty, which included more than 20,000 hours of aerial combat. They set a record, unmatched by any other Air Group during the Pacific War. They destroyed 315 aircraft in the air, 348 on the ground and sank a number of enemy ships.

David McCampbell was the only American aviator to become an Ace [at least 5 kills] in a day – twice. For his heroic and unmatched actions in the Pacific War, McCampbell was presented the Congressional Medal of Honor by Pres. Franklin D Roosevelt.

In addition to the Medal of Honor, McCampbell received: the Navy Cross; the Distinguished Flying Cross; the Silver Star and the Legion of Merit, along with many WW II Campaign Ribbons.

David McCampbell died on Jun 30, 1996 in Riviera Beach, FL. In 1988, the new passenger terminal at Palm Beach International Airport had been named in his honor. He was also enshrined in the National Aviation Hall of Fame and in 2002, the Navy commissioned the USS McCampbell [DDG-85], a guided missile destroyer, in his honor.

{Sources: The Naval History and Heritage Command; The National Aviation Hall of Fame; The Encyclopedia of Alabama, Christopher Maloney, Auburn University; The Navy Reader, and the National Naval Aviation Museum].