44.9% of locals have taken time to complete Census 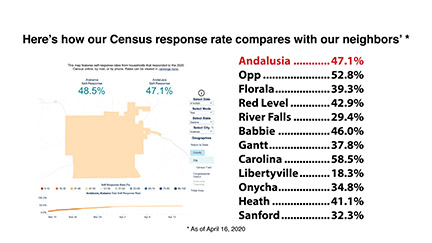 In the first full month of the 2020 Census, only 44.9 percent of Covington County residents have taken time to respond, according to the Census Bureau’s estimate of the population.

But in some parts of the county, residents are more engaged than others.

For instance, in Carolina, a whopping 58.5 percent of the estimated population has completed the Census.

Opp has a 52.8 percent participation rate.

In Florala, only 39.3 percent of the estimated population has self reported, to date.

“Based on our 2010 count, the U.S. Census Bureau estimated Andalusia’s population was 9,015,” the mayor said. “That’s just under the threshold of 10,000 residents that we need to make Andalusia an attractive location for many businesses.

“But we also know that our official population count was low, because the U.S. Census Bureau has determined that Andalusia and Covington County have areas of undercounted population,” Johnson said. “It is our goal to make sure every Andalusia resident – young or old, rich or poor, and regardless of skin color or ethnicity – be counted this year.”

Completing the Census only takes six minutes, he said, adding that residents may use the paper form, participate online, or call the U.S. Census Bureau to participate. Every man, woman and child in a residence should be included in the numbers reported to the Census Bureau.

“We understand the fear some feel in counting every member of their households,” Johnson said. “But your privacy is protected. It is against the law for the Census Bureau to publicly release your responses in any way that could identify you or your household, and that information is legally sealed for 72 years. The goal of the Census is to count every single person living in the United States. In Andalusia, we are aiming for 100 percent participation.”

The 2020 Census will dictate the distribution of more than $675 billion in federal funding to local and state governments. This funding supports schools, healthcare, infrastructure, community assistance and more. And its impact can last for decades to come in more ways than one. It is estimated that in 2016, more than $13 billion was allocated to the state of Alabama from programs affected by the previous census.

The census, which dates all the way back to 1790, counts every person – both adults and children – living in the United States. This information gathered is then used to monitor changes in communities, identify and address public service needs such as health care, education, public safety, housing, food, and rural access to broadband. The Census Bureau also uses the data to determine the number of seats each state has.in the U.S. House of Representatives.

Beginning last month, each Alabama household received a notification in the mail from the U.S. Census Bureau. It contained instructions for how to complete the census. Residents can respond online, by phone or via traditional paper form. The survey takes less than six minutes to complete. Each participant’s information is protected by law.

More information is available at www.alabama2020census.com.