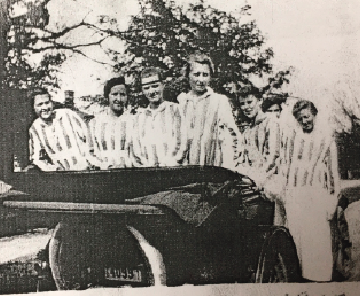 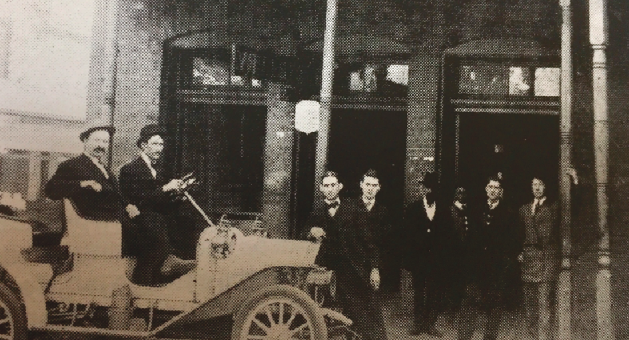 When the automobile was invented around the turn of the century, one by one the new horseless carriages began making their way into the city streets and driveways of Andalusia businessmen of the early 1900s. Porte cocheres were often attached to main street homes along East and South Three Notch Streets and River Falls Street. Defined as “a covered porch-like structure at a main or secondary entrance through which a horse and carriage or motor vehicle can pass through to provide arriving and departing occupants protection from the elements,” porte cocheres were a must for families who took pride in their new automobiles. To have a porte cochere at your residence was kind of a status symbol of the day. Evidence still exists today of a few of these historic homes remaining with the attached side porte cocheres.

Many stories are told and remembered about the early automobiles in the little growing town that “took off” after the train line was extended into downtown Andalusia from Searight in 1899. Recently the old movie “Cheaper By the Dozen” was aired on the classic tv channel.  All twelve children and their parents rode in a convertible roadster where they got much attention as they drove through town blowing the “ooh-gah” horn!

Dr. H. E. Battle whose medical office was located in the Campbell Drug Store (later the Thagard Drug Store) on the corner of Pear and Cotton Street, usually parked his Wing 1904 convertible at the foot of South Cotton Street hill near the L & N Depot. When he got a house call to head north through the Court Square, he could get a good start to head up the hill in his 1905 Buick (He traded cars often to keep up with the models!). Often the car couldn’t quite make it without the help of men standing around on the corner who would help push the doctor’s car so he could be on his way!

Even songs heard on the radio were written about the new inventions such as the 1928 tune, “Henry’s Made a Lady Out of Lizzie!” Its lyrics were “Everybody, everywhere, is falling for her now, I’m talking about the new Ford, and boy, it’s sure a wow. Ev’ry groom and blushing bride now enjoy their ‘buggy’ ride!”

J. R. Ward of Opp owned a hardware store. Because of his asthma, his doctor told him to buy one of the new automobiles and ride in it at night where the wind with fresh air would blow on him. He wrote a postcard to Henry Ford about purchasing a Ford and received a reply – “Take three and we will give you a car dealership!” So he promptly set up his three sons, Maxwell, Lawrence, and Howard, in dealerships in Opp, Florala, and Andalusia.

Howard Ward had just graduated from Opp High School around 1917-18. His new business, Andalusia Motor Company,  began ordering Model T Fords which were shipped in boxes and arrived at the train station in Andalusia. The contraptions first had to be put together. Then those who purchased the “horseless carriages” had to next learn how to drive them with special attention given to the hand brakes. Howard excelled in his new venture and weathered the Great Depression because of his expertise as a businessman. Because of mass production, automobiles were finally affordable for the average family.

Robert D. Burgess, the late publisher and editor of The Opp News, reminisced in a 1960 issue about the first automobiles in Andalusia where he and his family once lived. His memories are priceless so let me share some excerpts with you readers.

When the courthouse was located in the middle of the square, the street was unpaved, and the sand was a good five inches deep around the building. Carnivals commonly called street fairs in those days spread their tents once a year around the courthouse, and the people gathered to see and be seen.

Old timers would sit by the hour in the chairs on the front veranda of the courthouse and chew the fat with each other or just nap. Some would use chinaberry limbs to shoo away the gnats or flies. (This was kind of like the retirees of today sitting and talking at Hardees and McDonalds!)

One particular Christmas Eve night, several old timers gathered on Court Square with their horses, each with a good supply of 30-shot roman candles and quarts of hard whiskey in their saddle bags. Racing their horses at break-neck speed around the courthouse with roman candles spewing flaming balls at each other, these men were having fun. Riders were thrown onto the ground and horses had to be rounded up one at a time until the game started again.  It is remembered that one of the men who had a white beard cursed loud and long because he was declared out of the game. Some of the riders carried six shooters in their belts and would fire a few shots in the air to add to the celebration. (Sounds like events in later years where people rode around the square backwards in cars when World War II was over and another time when the University of Alabama won one of their national championship football games!)

The automobile was such a novelty back then that Barnum and Bailey Circus displayed one as its main novelty. These early  cars are as much a part of the history of Covington County as was the old courthouse.

Back in those days, there were few cars and lots of buggies and wagons. The car was generally known as a nuisance.  When the driver of the buggy or wagon heard one approaching, he would rush to take the women and children out and wait until the “gas wagon” passed by fearful of alarming the horses and mules.

Some of the first cars in Andalusia were memorable. The late Albert L. Rankin, father of the attorney Rankin, had a one-lung Cadillac. The late Charles Ward owned a 1901 Oldsmobile that he bought in Atlanta and had it shipped to Andalusia on a freight car. It had 6 ½ horsepower. Ward operated a bicycle shop at the time. This was one of the first cars to come to town.

The late Edward Doty, Andalusia Star editor, owned a 1905 Reo and later bought a Buick which was known as Gadfly. It would clock almost 50 miles per hour, a suicide speed in those days. The late J. M. Taylor, one of the best old timer mechanics in Andalusia and surrounding territories, bought a Stanley Steamer as did H. E. Fletcher. These cars were “tops” and ran on steam. They slowed down when the pressure became low. One had to wait until the steam built up to operating point.

The late Blake Dunson owned a Buick. He created some controversy when he made a bet that his Buick would outrun a buckboard pulled by a horse. The horse won!

Some other locals who owned cars back in the earlier days were G. B. Frierson who owned a Cadillac; Dr. L. D. Parker who owned a 1913 Ford; T. E. Henderson, owner of a Pierce-Arrow 1914 model; and A. C. Darling who sported luxury automobiles manufactured in Detroit, a Hudson and a Packard.

Back in those days, good roads were only a dream. Clay roads were few and far apart. It required a day and almost a night to drive to Montgomery and back. You were lucky if you didn’t have have a dozen punctures on the trip. You didn’t dare leave without several extra tires hanging on all sides of the car. You had to change the tires, patch your own tube, and pump up the tire with a hand pump.

If there were soft spots in the road and there were many, you would probably bog down and then have to go get the nearest farmer to pull you out with a pair of mules. He usually charged a dollar and enjoyed seeing you in a bog, because he didn’t like “gas buggies” nohow!

Then came the cars that would pull Debro Hill in second gear, the steep hill between Andalusia and River Falls. It had to be proven before the sale was closed. Dealers claimed their car would do sixty miles an hour on level ground. People standing around on the downtown corners predicted that all the fools would be killed off soon! There eventually came to be more fools than sane people as more dealerships were opened in downtown Andalusia and automobiles were purchased by the townspeople.

There is some automobile memorabilia on display at the Three Notch Museum donated by Luther and Frances Ward Taylor from the Andalusia Motor Company now celebrating being in business for over 100 years. Check it out some time when the doors are open again for visitors.

We’ve come a long way, baby, but isn’t it fun to Remember When!