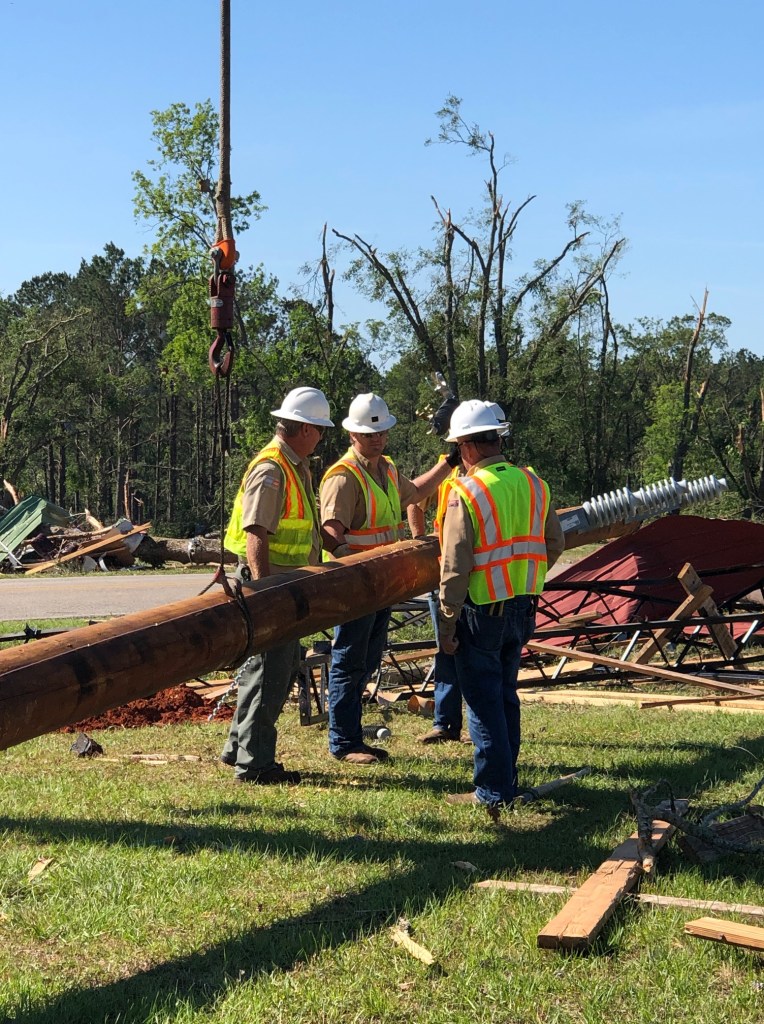 Covington County residents, first responders, power crews and others spent Monday and Tuesday working to clean up after severe weather wrecked its way through the county Sunday night into Monday morning.

Harris said the National Weather Service is still conducting its assessment in the county; however, it was determined that the Heath/County Road 70 area was in fact an EF-2 tornado.

Harris said they have ruled that the Opp area and Bush Isle Road were straight line winds.

Harris said that there were 116 structures with minor damage; 50 major damage; and five and a duplex destroyed.

In Opp, Mayor Becky Bracke reported that limbs and powerlines were down all over the city after the severe storms made their way throughout the county.

Garbage was unable to be picked up on Monday because city workers were busy cleaning up debris.

“Bare with the City! We had a lot of damage and our great City workers along with many wonderful volunteers are working hard to get Opp cleaned up,” Mayor Becky Bracke said.

Bracke said they experienced many site-seers in Opp on Monday.

“We are getting reports of folks sight seeing,” the Mayor said. “Now is NOT the time for that. We have our utility and street crews and fire, police and rescue squads out all over the City. They are working very hard and don’t need to worry about someone driving by as they are removing limbs, trees and power lines or tending to our citizens. Please stay away from the impacted areas unless you have a legitimate reason for being there.”

“The City of Andalusia Utilities had approximately 2,000 customers without power at one point on Sunday night,” she said. “All power was restored by 3 a.m., and Andalusia Utilities crews went immediately to assist the City of Opp Utilities, where they were still working a few minutes ago. A separate crew left last week to assist the City of Chattanooga with restoring power after Easter storms ripped through that region. That crew is still in Tennessee.”

Gerlach said that there are trees and limbs down in parts of Andalusia but crews are working to get those cleaned up.

As has been previously reported, the city recently furloughed about one-third of its employees in response to the economic fallout from the COVID-19 pandemic. Among the changes that resulted was less-than-weekly pick-up of trash and yard debris. On Monday, Mayor Earl Johnson and Public Works Director Glynn Ralls put together a plan to expedite the pick-up of that debris that his resulted from recent storms, and some furloughed employees are being called back to work to help with that effort.

“We ask that people be patient,” Johnson said. “This is a priority for us, but we will be working on getting the trash and debris picked up as soon as we can.”

On Tuesday, Covington Electric Cooperative crews were busy working on power restoration of the most extensive damage caused by severe storms on Sunday.

At the height of the storms, CEC had more than 9,000 members without power. As of Tuesday afternoon that number is down to approximately 753 members, with most in Covington County.

“We strive to provide as near 100 percent of uninterrupted electric service as humanly possible, but situations like this are simply beyond our control,” said Ed Short, CEC general manager. “Some people are experiencing prolonged power outages and we understand how frustrating these circumstances are to those affected. I want everyone to know that we are committed to doing everything in our power to get your power back on. We’ve made a lot of progress in our restoration efforts and we will continue these coordinated efforts until every member who can take service has it restored.”

There are still areas where utility poles and power lines are on the ground and debris and trees are blanketing the rights of way. “Several agencies have been working to clean up debris throughout the areas served by CEC, but our contract crews are focused on clearing debris in the rights of way so power line crews can get to those hardest hit areas and rebuild the power lines,” said Short. “They are doing an amazing job and we’re so thankful for their assistance. We’re also very appreciative to our own employees and every company that sent people to help our crews during this challenging time,” he added.