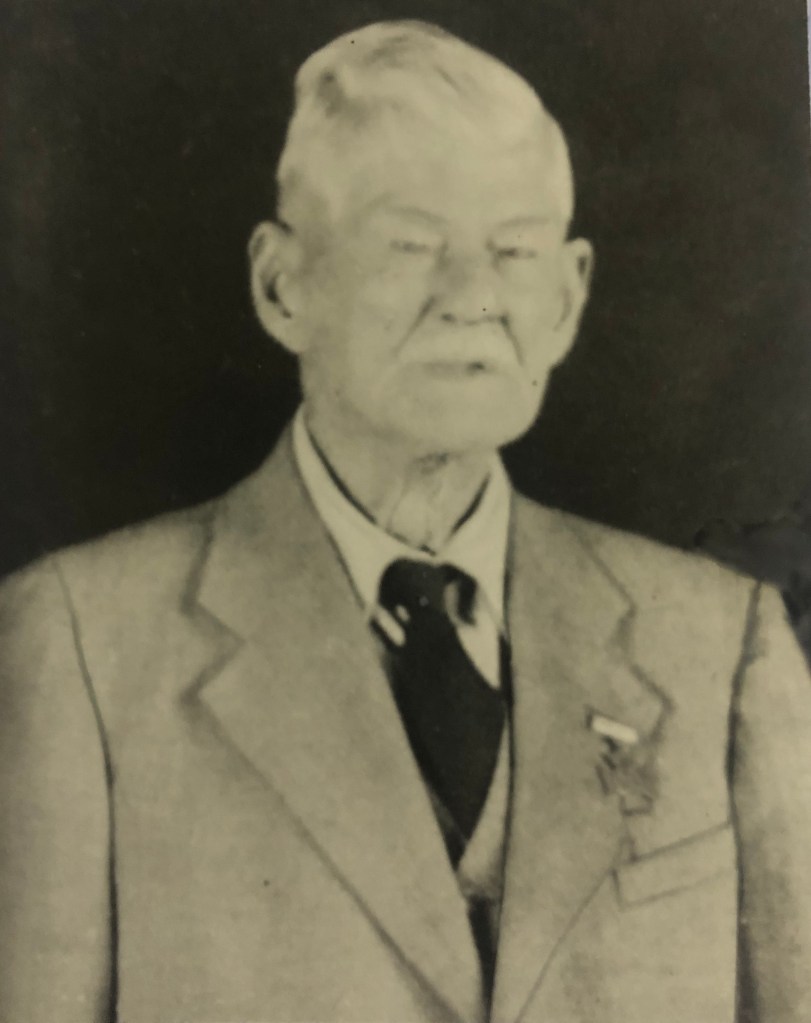 Today’s story will begin a series on the writer’s Great Grandfather Jefferson Sylvanus “Syl” Thomasson and his children. Syl was born on January 2, 1844, in a community known as Thomasville in the northeast corner of Pike County, Ala. The small community later became known as Inverness, and when Bullock County was formed, it became a part of it. His family had migrated from Madison, Morgan County, Ga., where they had lived for about eight years, after moving to that area from South Carolina circa 1839.

Syl was born as the ninth son of Thomas Randolph Thomasson and Sarah Roach, natives of Rock Hill, S.C. He moved with his family from Pike County to a location near the Rose Hill community of Covington County in 1854. Upon reaching adulthood, he resided in several different communities in Covington, but he eventually settled on a sizable farm in the Burnout community, which is located in Crenshaw County just northeast of the Covington line.

Syl spent his early years working on the family farm and attending schools around Thomasville until the family’s move when he was 12 years of age. Within a few years after the move, his mother, Sarah Roach Thomasson, died in 1858 and was buried in the Fairmount Cemetery in Red Level. That left Syl and his younger sister and brother as the only children still at home with the widowed father. One of the oldest sons, Cornelius Starr Thomasson. and his wife, Susannah Henley, took the three children into their home to care for them. The homeplace and furnishings were deeded to the couple as long as they provided support for his younger sister and two brothers.

Within a few years the family was to face turbulent times with the onset of the War Between the States. On January 11, 1861, Alabama became the third state to secede from the Union. The new Confederate Government was formed on February 4, 1861, and one by one Syl’s brothers began to enlist in the Confederate Army. Syl along with his older brother with, whom he was living, enlisted together in a company Colonel Lightfoot was raising in the Rose Hill area. They were immediately sent to Camp Watts near Notasulga, Ala., where they were sworn in on September 25, 1862. A few days later on October 8, they were assigned to Company E, 6th. Alabama Infantry Regiment by Captain Warren. The new company was immediately sent to Fredericksburg, Va. where the Sixth Alabama was engaged in some of the bloodiest battles of the war. It was a part of the Army of Northern Virginia under the command of General Robert E. Lee.

The brothers arrived in time to participate in the Fredericksburg Campaign and then fought at Chancellorsville, Gettysburg, Wilderness Campaign, Fisher’s Hill, Petersburg, and other skirmishes too numerous to mention. Syl experienced several stays in various Confederate hospitals in the Richmond area which included Howard’s Grove, General Hospital No. 9, and Chimborazo, the largest hospital of the Confederacy.

In February 1865, a misfortune befell Syl during the Siege of Petersburg. During a lull in the fighting, the Rebels including Syl went ice skating for recreation. He slipped and broke his arm which may have included the elbow. He was again admitted to General Hospital No. 9 and transferred the next day, February 25, to Howard’s Grove. He most likely did not return to duty as General Lee surrendered on April 9, 1965, and Syl was not among the six soldiers present who represented the 6th Alabama. Syl always felt that injury saved his life since so many of his comrades were killed during the closing campaign of the war. In later years, a knot developed on his arm at the location of the fracture.

Syl served throughout the war in Company E with his older brother, Neil, and with Micajah Henley who became his brother-in-law when he married their sister, Mary Ann Abbagail Thomasson, after the war ended. There were only six men of their company present with Gen. Lee when he surrendered at Appomattox. Three of those six were Henley relatives which included Micajah. Neil was in a Yankee prison, and Syl was in a hospital recovering from his injury.

Once paroled, Syl, found he had no means of returning home other than by walking from Richmond, Va. It took him 20 days to reach home, and that included a night spent in Montgomery to visit his older brother. His clothes were in rags, and he was almost barefooted. Never the less, day and into the night, he walked and ran the 70 miles of wet, muddy roads to reach his home near Rose Hill in Covington County. What a grand welcome he must have received!

Throughout his long life, Syl remained exceptionally proud of his role in the War for Southern Independence. However, the hardships, privations, sickness and loss of lives during battle had such a profound effect on him that he would seldom discuss it with even his family. On rare occasions, he would describe to his children and grandchildren a few of the unbelievable conditions the soldiers experienced. He related how quite often they went without food and decent clothing. They even searched for grains of corn left by the mules in the cracks of their feeding troughs, and they sometimes wore underclothes made of horse skins. At times it was so cold, they trotted in circles just to keep warm and survive.

Over the years, Syl maintained close communications with those veterans with whom he had served. Only they could understand the privations and terrors they had experienced, and this bonded them. On one occasion in 1924, Syl at 80 years of age, made a trip to Montgomery to visit a son who was hospitalized and to renew his wartime friendships from the area. His presence was learned by the media, and a story was published in a Montgomery newspaper entitled “J.S. Thomasson, 80, Comes from Crenshaw County to Look Up War Record and Finds His Comrades Gone.” It was discovered that he was the lone survivor of his company of 150 members. An impressive monument dedicated to Company E, 6th Alabama Infantry, CSA, is one of the most interesting features of the Historic Oakwood Cemetery in Montgomery where so many heroes are buried. Inscribed on it are the battles in which the company participated and the full roll of the company.

Syl was always proud of his service in the Confederate Army, and he participated in all the occasions honoring his fellow veterans. He thoroughly enjoyed attending many of the National Veterans Reunions throughout the South and participating in many local programs. On April 26, 1937, Confederate Memorial Day, at age 93 years and in Confederate uniform, Syl was the honored guest speaker for the occasion held in the brand new Luverne High School. In 1938, at age 94, he attended the 75th Anniversary of the Battle of Gettysburg in Washington, D.C. His last experience of honoring his service occurred only 10 days before his death in 1939. The State of Alabama held a ceremony in Montgomery honoring the U.S. War Department’s return of the Colors of the Sixth Alabama that had been captured at the Battle of the Spotsylvania Court House on May 8, 2864.

The inclement weather would not deter Syl from attending such an important event for him. He rode the bus to Greenville where he had a layover, visited with his granddaughter, Delano (Drake) Gillian, and had his picture made wearing his Southern Cross of Honor on his lapel. He continued on to Montgomery where he stood proudly in the rain for the ceremony. He returned home content, but the exposure led to him developing pneumonia which resulted in his death on March 22, 1939.

This series will be continued in future columns by featuring the children and descendants of Syl Thomasson. Anyone who has questions regarding these writings or who might have memories related to the family is requested to contact this writer, Curtis Thomasson, at 20357 Blake Pruitt Road, Andalusia, AL 36420; 334-804-1442; or Email: cthomasson@centurytel.net.