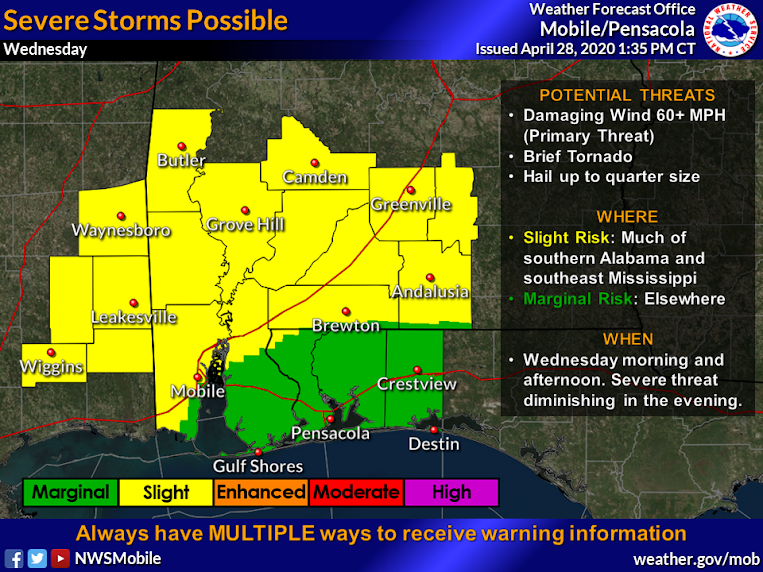 The Covington County Emergency Management Agency is monitoring severe weather that is possible for Wednesday.

“Primary threat will be damaging wind gusts to 60 mph,” EMA director Susan Harris said. “A brief tornado and hail up to quarter size are also possible. A slight risk of severe thunderstorms for much of southern/southwest Alabama and southeast Mississippi (roughly along and north/west of a line from Florala to Brewton to Mobile). There is a marginal risk elsewhere (primarily the Florida panhandle and southern Baldwin County).”

Harris said a line of thunderstorms early Wednesday morning will approach the area from the west.

“This line of storms will carry potential for gusty winds, but otherwise will likely be weakening as it enters the area,” Harris said. “Resurgence in convection along this line is expected by late morning and afternoon hours as it reaches roughly the I-65 corridor and east. Additional redevelopment is possible along the cold front itself, behind this leading line of storms, over southwest Alabama during late afternoon hours. This second line of storms likewise pushes east across south-central Alabama counties through early evening and the severe threat diminishes thereafter.”

Damaging straight-line wind gusts will be the primary threat with all storms, though a brief tornado and hail up to quarter size cannot be ruled out, Harris said.

“At this time, widespread flooding rainfall is not expected, as this system will remain progressive and therefore limit the residence time of storms over any one area,” Harris said. “However, brief periods of intense rainfall will be possible in stronger storms and could lead to some localized flooding in vulnerable areas susceptible to poor drainage. Storm total rainfall amounts around 0.75″ to 1.25″ are currently forecast, with locally higher amounts possible.”