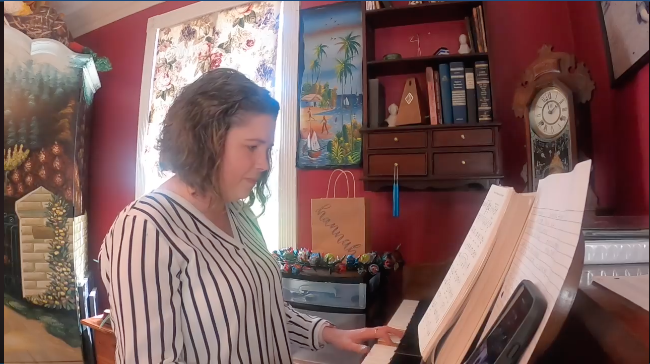 Cross said eight years ago she had an idea to post contemporary Christian music lyrics on her Facebook page, which is where she got the idea to host a sing-a-long.

“I was teaching at a small Christian boarding school in Mississippi at the time,” Cross said. “I decided to post these song lyrics that kind of meant something to me. Over the years, I kept posting these lyrics and about three to four years ago, I decided to do sort of ‘A Year in Song,’ where every day I sang a song. I think people really enjoyed that so instead of posting lyrics I decided to sing these hymns.”

Although Cross said she does not like camera time, she decided to get tape all of her videos.

“I don’t really like video myself or taking selfies but I thought that it would be fun,” Cross said. “People can sing along and it won’t be anything perfect. I know that I may make mistakes or play the wrong note, but honestly, that is the way it is in church and I wanted to make my videos as homey as possible.”

Cross said the initial reason for the videos wasn’t to inspire hope, but now that she has done a couple of videos, now she is picking hymns that will uplift.

“I have definitely thought about the song choices as we have gone through all of this,” Cross said. “Like this Friday’s video is going to be ‘The Old Rugged Cross,’ and I just like that one because the words say, ‘I will cling to the old rugged cross,’ and I think that is a song that people can latch on to because it speaks about that cross that we can hold onto and the hope that we can find through Jesus.”

Even though Cross can’t teach students in the classroom, she has not stopped teaching. She takes to FaceTime and Google Suite to teach 14 students piano during the week.

“It has been really interesting getting ready and trying to do lessons over FaceTime,” Cross said. “This is the fourth week of having to do them online and it is interesting trying to find different concepts of keeping them entertained. I have tried to incorporate challenges to try and keep them practicing.”

Performing is another one of Cross’ talents and she recently performed with Dr. Steve Hubbard for a Hymn Sing-A-Long at the Lower Alabama Arts Coalition.

“It was so much fun,” Cross said. “We have actually had several comments saying that we should do another one. So, a Hymn Sing-A-Long part two might be happening.”