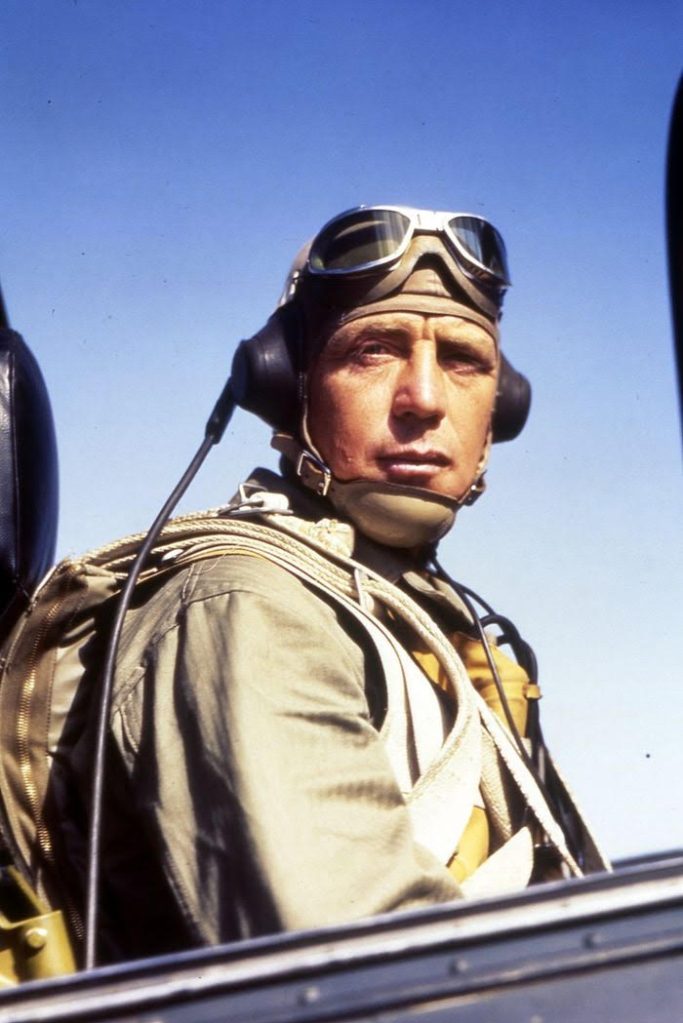 Cdr. Charles Crommelin in the cockpit of his F6F Hellcat aboard USS Yorktown [CV-10] 1943

As mentioned in a prior article, the five Crommelin brothers, from Wetumpka, AL, all graduated from the United States Naval Academy and served during WW II. Two of the brothers, Charles and Richard, both naval aviators, lost their lives in battle. Today’s article will cover the service of Charles L Crommelin.

Charles L Crommelin was born Mar 16, 1909. He graduated from the Naval Academy in 1931. After receiving his wings as a naval aviator, he joined the fleet flying fighter planes. Early in his career, he survived a crash landing while test flying an aircraft. When the F6F Hellcat came into service, it became Charles’ plane of choice.

Charles received his first Distinguished Service Cross for his actions over the Japanese held Marcus Island. Flying from the USS Yorktown [CV-10] as Commander Fighting Squadron One [VF-1],  Crommelin came under antiaircraft fire that severely wounded him and damaged his aircraft [see picture]. His heroic action in successfully landing the aircraft back aboard Yorktown was captured on film and was used in a wartime propaganda film, Fighting Lady. Medical personnel who examined Crommelin, found over 200 particles of glass and metal in his face and body. After arriving back in Pearl Harbor for treatment, It was said that he quickly exited the ambulance and headed to the Officer’s Club for a drink.

The citation reads in part: “While leading an important reconnaissance flight over Mille Atoll on 21 November…in complete disregard for his personal safety and in the presence of determined anti-aircraft fire, he strafed one plane and was maneuvering to attack the other plane when his plane was struck by a shell which exploded within the cockpit, shattering the instruments and severely wounding him. With no vision in his left eye, his right wrist broken, a sever wound in his right chest, as well as many cuts and abrasions on his face, arms and body, and with forward visibility through the cockpit enclosure almost zero, despite loss of blood, he brought his plane back over one hundred miles and made a perfect landing aboard his carrier [the Yorktown]…”

Commander Crommelin was awarded a gold star in lieu of a second Distinguished Flying Cross for action as Commander of Air Group Five during the Gilbert Islands Campaign.

Both DSCs were presented to Crommelin back in the states while in San Diego for rest and recuperation. The awards were presented by RAdm. Elliott Bushmaster, Commandant Naval Air Center, San Diego. Adm. Bushmaster was the father of Crommelin’s wife, Anne.

In early 1945, Cdr. Crommelin was designated Commander of Air Group 12 aboard USS Randolph [CV-15]. They were known as “Crommelin’s Thunderbirds”. Crommelin and Air Group 12 engaged in the first carrier air strikes against the Japanese homeland in Feb 1945.

Later in Mar 1945, Cdr. Crommelin volunteered to fly from the USS Hornet [CV-8] as part of pre-invasion airstrikes on Okinawa. On Mar 28, while flying a photographic mission, Cromelin’s F6F was seen crashing into the water off Okinawa after a mid-air collision with another F6F. His body was not recovered. He is memoreialized at the Pacific National Monument in Honolulu, Hawaii.

For this last mission, Crommelin was awarded the Navy Cross. The citation reads as follows:

The President of the United States of America takes pride in presenting the Navy Cross (Posthumously) to Commander Charles Lawrence Crommelin (NSN: 0-70011), United States Navy, for extraordinary heroism in operations against the enemy while serving as Pilot of a carrier-based Fighter Plane and Commander of AIR GROUP TWELVE (AG-12), attached to the U.S.S. RANDOLPH (CV-15), during the first attack on Japan by Naval carrier-based planes on 17 February 1945. Acting as Strike Leader for a coordinated attack on a vital aircraft engine plant in the Tokyo area, Commander Crommelin courageously refused to turn back when he discovered, upon reaching the Japanese coast, that his engine was operating at greatly reduced power and he knew extremely adverse weather conditions made necessary a long trip over the Japanese mainland to the target area. Pressing home the attack in the face of intense and accurate anti-aircraft fire and fighter opposition, he was last to leave the target area, taking damage assessment photographs before delivering his own rocket and strafing attack. Commander Crommelin, by his outstanding professional skill, inspiring leadership and gallant devotion to duty, contributed materially to the serious damage of an important enemy installation, thus upholding the highest traditions of the United States Naval Service. 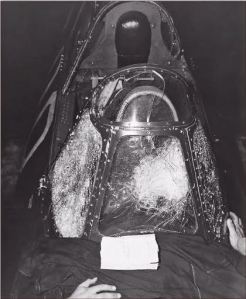 Photo of damaged F6F flown by Cdr. Charles L Crommelin. He received his 1st Distinguished Service Cross
for bringing this damaged plane back aboard Yorktown after suffering severe wounds

LESSONS LEARNED DURING THE STORMS OF LIFE