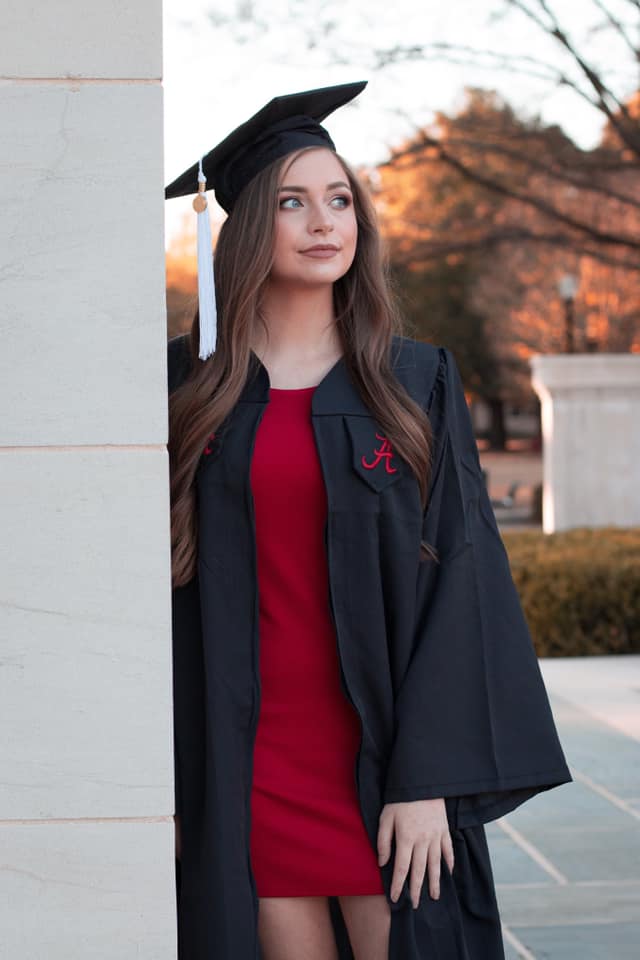 Red Level High School alumna Donnamy Steele is one step closer to making her dream a reality after graduating from the University of Alabama.

Steele graduated from RLHS in 2016 and said she always knew she wanted to go to the University of Alabama.

“I decided to go to Alabama whenever I was really little, maybe sixth grade,” Steele said. “I remember I found a journal when I think I was in 11th grade, where I said it again. I figured I should apply there since it was the only school that I thought of. It ended up being the only school that I applied for and I got accepted.”

Steele majored in English with a double minor in political science and creative writing and graduated with honors.

She said she has been writing since a young age.

“When I was little I would try to write music and all kinds of things,” Steele said. “It is something that I have always been passionate about. I actually didn’t add creative writing to my minor until my junior year in college, because I originally planned on going to law school, but I wanted to do something that I actually loved.”

In her four years of undergraduate studies, Steele has been published three times in one of the school’s magazines, Alice.

“Alice is a magazine that is written by the students at the university,” Steele said. “I came across it on Instagram one day. So, I messaged them and asked about it and they gave me a lot of information about how I could get involved. They have a whole team of editors, so it was really cool to get to experience that process.”

Some highlights of her time at the University of Alabama include going to her first Crimson Tide football game and realizing that she wasn’t the only student from Covington County in Tuscaloosa.

“My first football game was a really cool experience because that’s what most people think of when they talk about the University of Alabama,” Steele said. “There were actually a lot of people at the university from Andalusia, which I thought was really cool because when I first moved there I expected to not know anyone because Red Level is a really tiny school. Running into people that I knew made me feel more at home. The university also had a lot of different organizations that I felt really at home with. In high school, that is how I stayed involved. So, I joined a group called Charge, which is an all-girls group that helps you stay motivated and involved.”

For seniors heading to universities in the fall, Steele said don’t let fear hold you back. “During my freshman year, I was terrified to do new things,” Steele said. “I just kind of kept to myself because it everything was so unfamiliar to me. Once I opened up and started making connections, I realized that it isn’t that scary. I knew that I would be missing out on a lot if I just kept to myself. Also, I want seniors to know that it is OK if they don’t know what they want to do. It is OK to change your major later on in college if you don’t know for sure. There are so many people that stick with the same major because they think they can’t change their major when they are a junior and that isn’t the case.”

Steele is one of the several students across the nation that has been affected by the COVID-19 pandemic.

“It definitely affected me a lot,” Steele said. “Neither of my parents graduated from high school and most of my family have not gone to a university. So, it was a huge deal for me to walk across that stage at graduation. I had a lot of odds against me even getting to Alabama, so it kind of felt like that would be the moment where things come full circle. It’s taken a while for me to realize that even though I don’t have the actual ceremony, at the same time, I’m still getting the same experience and I still have my diploma.”

Now that Steele is finished with her undergrad, she said she plans to work for a publishing house to find out what it takes to be a published writer.

She is the daughter of Teresa Haley and Bobby Steele.