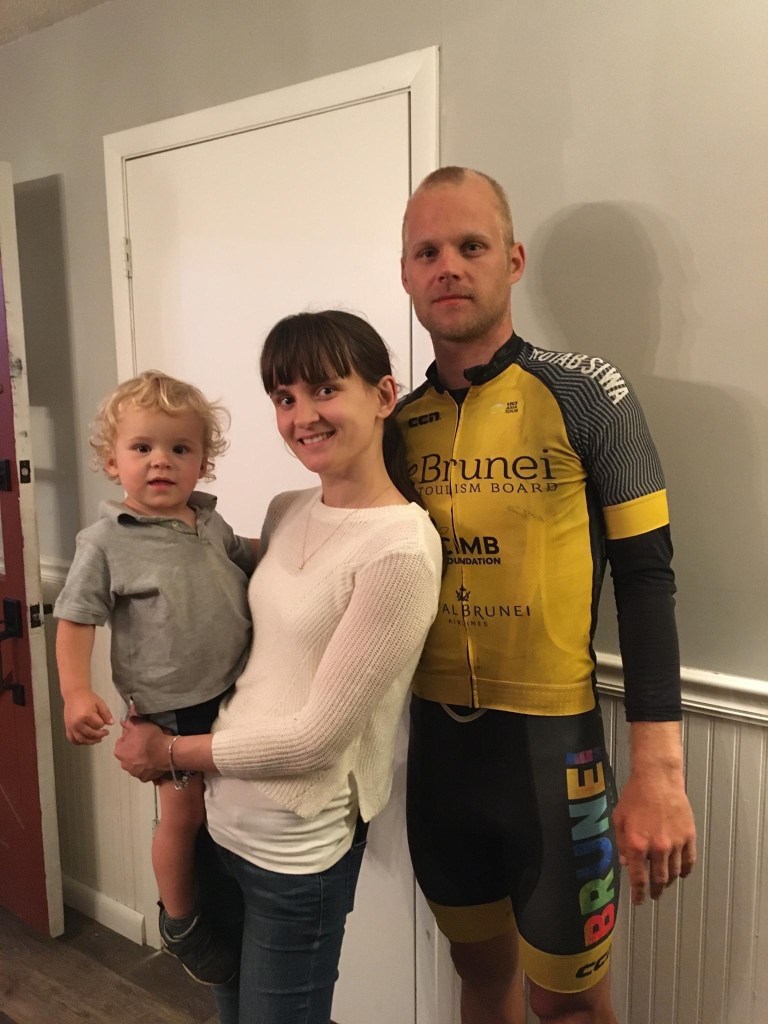 His journey across the United States began on April 16, when he decided that it was now or never.

“When the cycling races were canceled due to COVID-19 and then our hotel closed, I became pretty frustrated,” Weaver said. “I applied for every program and aid I could find and just waited. We have a little hotel in Helen Georgia and we have been running that, but because of COVID the city shut down. I just said I will never have this opportunity again. It drove me crazy. So I decided to do something that has always been my dream to do. But something I’ve never had the time to attempt.”

Ideally, that is when he took his bike, a t-shirt, shorts and two cycling uniforms and got on a one-way flight that took him to San Diego, Cali. His journey would start there and end back to his home in Helen, Ga.

“I flew into San Diego, and that was my ‘easy day,’ then went right through the mountains and an Indian reservation,” Weaver said. “6,000 feet later, climbing in 95-degree weather, I headed through Brawley, Cali., through the desert, and towards Arizona. I saw a desert with no water around me for 90 miles.”

On day two, Weaver made it to Yuma, Ari., making it three states in two days.

“I felt good, so the first two hours I went pretty hard, averaging 23 mph that zapped my energy for hours 6 and 7,” Weaver said. “I had to change my mindset from race mode to chill and take things slower. Also, I went by a border crossing and saw the border wall with Mexico. The thing is huge—thirty feet high and made of steel.”

Weaver said he rode 90 miles to Quartzsite without seeing one single gas station, or anywhere to fill up water.

“90 miles and I ran out of water,” Weaver said. “Quartzsite is an interesting place, though. It’s an old mining town, in the absolute middle of nowhere. There are only 3,000 residents, but over a million visitors come in RV’s during the winter months to vacation for the warm weather and mineral festivals.”

Weaver then made it to Phoenix, Ariz., eventually leading him out of the desert and into the mountainside when he reached Scottsdale, Ariz., and Payson, Ariz., by day five.

On day six, Weaver was in Springerville, Ariz., he described it as having endless pastures with grazing cattle and rolling hills, at 7,000 feet elevation.

“It was a ghost town for 40 miles,” Weaver said. “It was so beautiful.

Weaver reported an epic day on the seventh day of his travels.

Weaver entered the big state of Texas ending up in Brownfield, Texas on day nine and traveled through the largest state for four more days.

“Windy travels came on day 12 as I cycled through 124 miles directly against a headwind. It was rough,” Weaver said. “I took back roads most of the way and it did not rain once. One reason why I wanted to take the back roads is to discover the true America. Not Hollywood, Wall Street, nor Washington, but the places and people where the small, family-owned businesses are still alive.”

By day 15 Weaver turned on the turbo to reach Georgia quicker by day.

“I left Arkansas and 135 miles later made it to Mississippi,” Weaver said. “It was pretty cool to see the Mighty Mississippi River. The Mississippi Welcome Center is a Victorian-like Riverboat, still floating on the water. I was riding through some swamps and each “bayou” had its name, which was pretty cool.

On day 16, Weaver made it to Tuscaloosa, Ala. Ironically the one shirt that was mentioned in the beginning that he packed just so happened to be an Auburn t-shirt.

“I only just now realized the only shirt that I brought is orange and blue, with the A big Auburn on the front,” Weaver said. “The hotel receptionist said he was not going to let me stay.”

On day 17, Weaver cycled hard from Gadsden, Ala., all the way back home to Helen, Ga.

“The final ride into Helen was no easy spin,” Weaver said. “It was 175 miles, 8,200 feet, and climbing. However, I made my final destination for ten hours and was home in Helen, Ga.”

With relatives in Covington County, Weaver said he first picked up a bike in Andalusia.

“With my father being from Andalusia, we would visit in the summers and spend time at my grandparent’s river house on Gantt Lake,” Weaver said. “I took up cycling one day and just rode off. I started when I was 16 and wanted to see how far I could go in one day and we lived in Florida in the country and I biked about 100 miles and came home destroyed.”

His advice to anyone that wants to push themselves to do something is simply to do it.

“Just go do it,” Weaver said. “There is so much information you can learn along the way, just take the first step.”

Weaver had a total of 3 flat tires in California, Arizona, New Mexico, Texas, and Arkansas combined.

“You need a lot of free time and have to be strong enough to bike for 17 days to be able to do this,” Weaver said. “I was going to get a tent and what not but I didn’t want to put that up after riding all day. I would get cheap hotels along the way.”

In order by state, Weaver’s travels included traveling through California, Arizona, New Mexico, Texas, Arkansas, Mississippi, Alabama, and then his final destination on his bike back home to Helen, Ga.

“I had two cycle uniforms and I was in that for eight to 10 hours a day,” Weaver said. “I was so tired and my legs were raw when I made it back home. The fatigue hit me but during the trip, I felt motivated. I am pretty lucky it could have turned out bad and I am blessed.”

Weaver is the grandson of Sybil and Roy Weaver Jr. His parents are the late Roy H. Weaver III and Lynda Weaver Mondeo. He has a wife and child and now lives in Georgia.