Crommelin honored with the Navy Cross 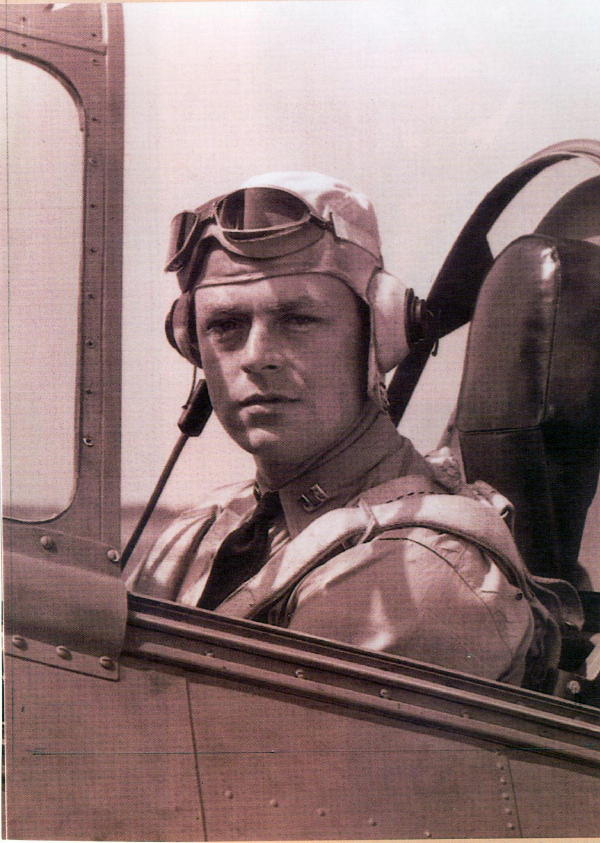 As mentioned in a prior article, the five Crommelin brothers, from Wetumpka, Alabama, all graduated from the United States Naval Academy and served during WW II. Two of the brothers, Charles and Richard, both naval aviators, lost their lives in battle. Today’s article will cover the service of Richard G Crommelin.

Richard “Dick” Crommelin [b. Jan 8, 1917] graduated from the US Naval Academy in 1938. His first duty assignment was aboard the battleship USS Pennsylvania [BB-38]. He was sent to NAS Pensacola for flight training in 1940. He received his wings in Dec 1940 and was designated Naval Aviator #6977. He was assigned to Fighter Squadron 42 [VF-42] aboard USS Yorktown [CV-5] in May 1941. He flew the Grumman F4F Wildcat  As a member of VF-42, he took part in the Battle of the Coral Sea in May 1942. VF-42 was flying raids on the New Guinea ports of Lae and Salamaua when Richard shot down two Japanese Zeros. Later he was shot down and had to ditch his plane at sea. For his actions in the Battle of the Coral Sea, Richard received the Navy Cross.

His citation reads in part: “…for extraordinary heroism in operations against the enemy… Crommelin conducted a determined and decisive attack against an enemy Japanese four-engine patrol plane which resulted in the destruction of that plane, thereby preventing the detection of our forces by the enemy. His aggressive spirit of fearlessness in facing great odds to make eight successive attacks against six enemy fighters attacking our surface forces and harassing our anti-Torpedo Plane patrol resulted in the destruction of two enemy fighters and severe damage to several others. His conduct in these engagements was characterized by unusual leadership, prompt and sound judgment in the accomplishment of his mission and a complete disregard for his own personal safety.”

One month later, Richard, along with his brother John, took part in the Battle of Midway, defending the Yorktown from Japanese attack. Richard was awarded a Gold Star in lieu of a second Navy Cross, for his part in disrupting an attack by 18 Japanese planes. Tragically, Yorktown was lost three days later.

In 1944, Richard Crommelin became commander of VF-88, embarked aboard the second USS Yorktown [CV-10]. In Feb 1945, while at San Diego Naval Air Station, Richard was involved in a training accident. He was piloting a captured Japanese Zero when his plane was struck by another Navy plane while taxiing for takeoff. The Zero was destroyed but Richard was unhurt.

He resumed his duties aboard Yorktown, as CO of VF-88] in May 1945, from NAS Hilo, HI. In July,  the Yorktown was taking part in US attacks near Hokkaido, Japan, when Richard’s plane collided with another aircraft during heavy fog conditions. His death came just 2 months after the death of his brother, Charles. Cdr. Richard “Dick” Crommelin was posthumously awarded the Legion of Merit and the Distinguished Flying Cross.

Remember When: Sanford was a mill town