Remember When: Sanford was a mill town 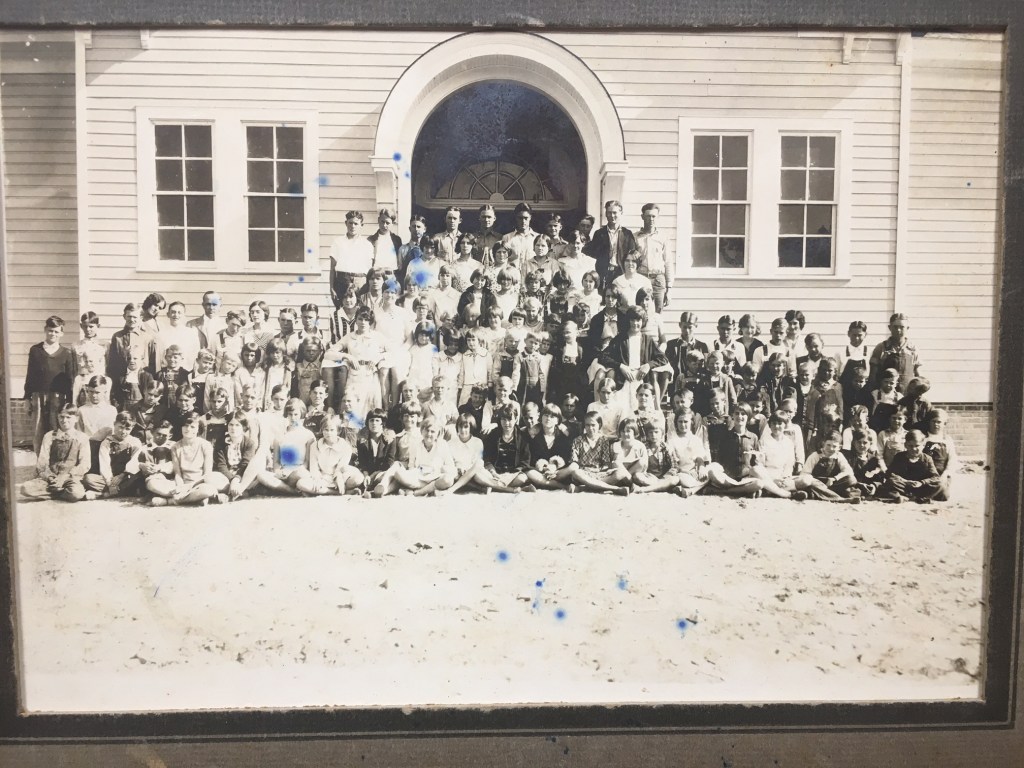 The late Sidney Waits wrote many stories about the Henderson Lumber Company in Sanford which began about 1902. His grandfather, George Orkney Waits, had purchased an interest in the sawmill operation and moved his family to Sanford. His father would catch the train each week and go to Andalusia to attend school where he boarded with the John Knox family. His grandmother was active in the Baptist Church at Sanford where she helped with the music. His grandfather and Mr. J. D. Henderson donated the land for the church.

The Henderson and Waits Lumber Company operated the mill until about 1914 when the mill cut out most of the available timber in the area. The mill depended on log trains to supply its need. Those trains followed swamps along the Yellow River and Five Runs to bring timber to the mill. Convicts worked for the mill as did most of the large mills of the day according to Waits. The 1910 census inventoried 220 convicts in the stockade.

“The arrival of the railroad and the grand entrance of timber and turpentine impacted Covington County as much as anything else in our early history. Timbering thrived after the arrival of the ‘iron horse’ with its shrill whistle and clanging bell,” Waits wrote in his From the Halls of Montezuma book.

This week the Covington Historical Society received some old pictures from the niece, Betty Wilroy, of a former teacher at the Sanford School, Gladys Helms. I searched for and found some historical information about the town and the school in the old Andalusia Star editions so I will share it with you readers.

Sanford, a small community located between Opp and Andalusia on U. S. Highway 84, came into being around 1874 when the first post office was erected. Incorporated in 1902, it began to flourish after the turn of the century when the L & N Railway was established on its way to Graceville, Florida, and the timber company employed many people. This business was situated near the present airport property. Other businesses including a commissary sprung up as well. After 1914 most of the businesses ceased operation when the timber company went out of business.

Waits wrote, “There was culture in Sanford in 1910 as there were at least two music teachers boarding with the John W. Brice family, Bessie Clark, age 22, and Evelyn Mathews, age 21. Brice was a foreman at the band saw mill.”

In Gus Bryan’s Covington County History, I found that the original Sanford School building was a two-story frame structure that burned in 1929. The school year was completed in the Baptist Church that year. A new five-room building was constructed by the next school year and the labor was donated by local people. John J. Wilson, Sr. was the principal there for thirteen years. In 1932 an auditorium was built and in 1935 three more classrooms were added. By 1947 a cafeteria was added and made possible through the efforts of the P. T. A. Principal J. C. Henley assumed the duties in 1943.

February 24, 1910 – “There will be an all- day singing and dinner on the ground at the old Sanford School House on the 4th Sunday in March. Everybody is invited. Come and bring a well-filled basket.”

March   1910 – “The singing society met at the Sanford School House where a most heartfelt thanks was tendered for the hospitable manner in which this body has been entertained by the good people in the vicinity.”

May 26, 1910 – “Sanford School closed (for the summer) Friday and the little folks will enjoy their earned rest. Master Levy, the seven-year old son of Charles Smith, has attracted much attention by his skill as a violinist. He is the pupil of Miss Mathis, music teacher at the school. The men who have built the town of Sanford and who feel an interest in the welfare of its people are planning a ‘royal good time’ for the 4th of July. G. O. Waits, A. Blauvelt, A. T. Woodham, and Dr. George Nix compose the board of trustees of Sanford School.”

June 30, 1910 – “It is pretty generally conceded that Sanford is one of the best mill towns in the state.”

November 20, 1913 – “R. D. Powell, principal of Sanford School, reports his school is in a flourishing condition with 70 pupils enrolled. He is making an effort to secure a school library and has subscribed for a number of publications for the benefit of the pupils. The Andalusia Star will be found in the library’s reading room.”

December 7, 1915 – “The Sanford Public School will observe Clean-up Day Friday, December 10. All patrons and friends are invited to come out and help us in this work. We are proud to be in a position to communicate with whom we please by phone from this place as we now have a long distance telephone at the Sanford Mercantile Co.’s store.”

December 14, 1915 – “At the school fair of the Opp district of Covington County Schools, Ferrell Powell of Sanford School gave Patrick Henry’s memorable oration. He was awarded a blue ribbon. Sanford School had the honor of spelling the other schools down. Gertrude McBryde of Sanford won on recitation.”

August 24, 1917 – “There will be an ice cream and box supper at the Sanford School house Saturday night, August 25, Everybody is invited to come and be with us.”

February 11, 1921 – “Examinations were made at the Sanford School Thursday. Dr. T. Q. Ray and E. L. Gatlin conducted the physical and dental examinations for diseased teeth and tonsils, hookworms, and weak eyes. The results were far from good. Services were rendered to 130 families. The Covington County chapter of the American Red Cross conducted these examinations where doctors gave their time to this and other schools.”

December 21, 1933 – “The Community School for Beat 20 met at the Sanford School. A large and enthusiastic crowd attended. The ice cure method of saving pork and the curing of meats was discussed and demonstrated by Auburn’s Dr. Sewell and Miss Garrett. Simple health rules were discussed. Seven rules for healthy living emphasized were – Balanced food, Water, Air, Exercise, Sleep, Elimination, and Bathing. A large number pledged to build a shower bath at their homes.”

August 8, 1935 – “A new classroom is being added to the Sanford School which will help take care of the overflow which took place last year.”

November 11, 1937 – “90 children of the Sanford School visited points of interest to them in Andalusia Tuesday. The children were accompanied by their teachers, Misses Mamie Ellisor, Lillian Smyley, Mrs. V. P. Lloyd, and Mrs. DeWitt Bryan. Their first visit was to the Public Library which was opened early by Mrs. Duggar. Then they visited the Andalusia Bakery, the Post Office, a five and cents store, and then the Methodist Church where Mrs. Josie Lyons played for them several numbers on the pipe organ.”

November 23, 1939 – “This was a ‘blackout’ day for Sanford School. Some school boys pranked with the switch on the REA line to see the sparks fly out the top of the post. The linesmen stated that it was a wonder that the one who did this was not electrocuted. The current was off and the new heating system could not operate hence the buses had to make their return trips.”

November 2, 1950 – “The Halloween party at Sanford School was a roaring success. The building was too small for the crowd. The hot dogs gave out too soon and the country store sold out. We never saw so many cakes sold in so short a time. The children fished all the fish out of the pond. Everyone played Bingo to their heart’s content. Late in the evening, Principal Henley crowned the King and Queen, Jesse Joe Wiggins and Gyndol Maughan, along with the Prince and Princess, Bobby Ray and Julia Ann Davis. The teachers wish to thank everyone who made the carnival a success including the merchants of Opp and Andalusia.”

April 26, 1951 – “A Round and Square Dance at Sanford School will be held Friday night under the sponsorship of the P. T. A. This will benefit the library fund. $1.50 per couple.”

Events through the years at the Sanford School were oratorical and talent contests, plays and operettas, donkey basketball, and even a fiddlers’ convention in 1932. It was truly a community school where many social gatherings were held and memories for a lifetime were made.

In 1984 the school building was torn down to make way for the new town hall and fire department on the school site. I am certain that many of you readers remember when school consolidation occurred and when the students were assigned to Straughn School while others went on to attend school in Andalusia. Two Sanford beauties went to high school with this writer at AHS – Mary Tucker and Norma Worley, both of whom love Sanford and were delighted when the Alabama historic marker was placed at the town hall!

The widening of U. S. Hwy. 84 resulted in some homes and stores needing to be moved or relocated. Many citizens in economic development are certain that the Town of Sanford is on the way up with the airport, the Blade and Wing Café, a car dealership, convenience store, the town hall, the volunteer fire department, the Covington Baptist Association, several churches, and other businesses in connection with the airport thriving at this time.

Some prime and cleared real estate is just waiting to be developed there on the 4-lane highway with a short distance in either direction to both Opp and Andalusia. 20 or 30 years from now, or maybe sooner, some historian will say “’Remember When’ Sanford had that period of growth and became the magnet that finally drew Andalusia and Opp together!”