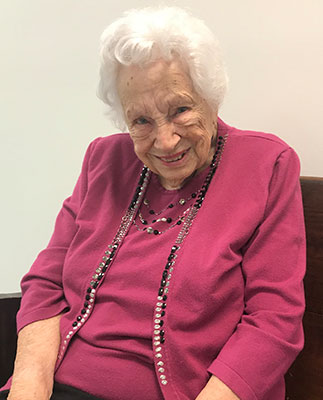 Helen Hess lived a long and fulfilling life of 105 years before her passing on Thursday. The Andalusia community mourns her passing and celebrates the life she led. She is remembered by her First United Methodist Church family. John and Faye Vick were both friends of Hess, dating back to when she first moved to Andalusia in 1996. “We were dear friends ever since she moved here years ago,” John said. Hess’s late husband, Glenn Hess, was a colonel in the army and a World War II veteran. The couple was origi­nally from Iowa and they traveled frequently for Glenn’s work. After her husband’s passing, Hess moved to Andalusia. She made this transition to Covington County with the help of her son, Marvin, and became a resident of the town thereafter.

John remembers when he and his wife met Hess at First United Methodist Church. “She moved here and became a part of the church,” Vick said. “She showed up one day and was just the friendliest, sweetest lady.” The couple describes Hess as an impactful woman whose love for God was evident in the way she lived her life. J. Vick explained that different people would help Hess get to and from the church, and that she was always one of the first to show up on Sunday mornings. Jane Barber took her over the last few years ac-cording to John and Faye. “They were one of the first in the church and
[Helen] always hugged my neck,” J. Vick said. John and Faye looked up to their friend of many years. “She was over 100 years old and was still in church every Sunday,” John said.

“Although Helen did not have her husband with her, the church was a family to her. She expressed her love for her church family with her famous hugs. She was always present in our church and hugged everyone.” Hess was known for her southern hospitality, resulting in her being nicknamed Helen “Hugging” Hess by her church family. Hess left a great impact on the people she met during her time in Andalusia.

Her kind spirit and devo-tion toward the church are just two of the character-istics that she is described with. “She was one of those people you meet once. She had so much humility and love for everybody,” J. Vick said. John and Faye Vick struggled to find the words to describe Helen perfectly, ultimately concluding, “We could never say the things that should be said.”

John looks back on his friendship with Hess, expressing that every good thing he could say would still be an understatement. “She was a wonderful, unique person. I’ve never met a person who showed love like she did. She never met a stranger,” J. Vick said. “Now that Helen has passed, the light that Helen was is more evident to those who knew her. You don’t stop and think of how different someone is from everyone else until they’re gone.”

Mrs. Helen Frances Hess, 105, of Andalusia, passed away Thu., May 21, 2020, at her residence. The family will hold a memorial service at a later date. She is survived by her daughter, Vicki Marie Cryan of Andalusia; her son, Duane Carroll Hess of Florida; 11 grandchildren; 10 great-grandchildren; and 8 great-great-grand-children.