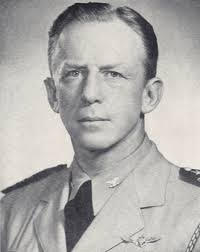 John G Crommelin will be the third  of  five  Crommelin brothers we have written about.

All five brothers from Wetumpka. graduated from the US Naval Academy and served in the Navy during WW II. In prior articles, we have written about Charles and Richard, both of whom lost their lives in aircraft accidents during the war.

John Geraerdt Crommelin, Jr., was the eldest of the brothers and the first to attend the Naval Academy. He was born in Montgomery on Oct 2, 1902 to John G. Crommelin and Katherine V Gunter. After attending public schools in Montgomery, John attended the University of Virginia for one year, before receiving an appointment to the Naval Academy in 1919. John was quoted as saying, “My mother felt that Southern boys needed discipline”. The Academy yearbook described John this way: “Here he is folks, the typical southern gentleman – fond of dogs, little children and pretty women”. John graduated in 1923 and was assigned to sea duty for two years before entering flight training at NAS Pensacola, Fl. in 1925. He received his wings in 1927. During the years before WW II, John served in various squadrons and other assignments  aboard The USS Lexington, USS Colorado, USS California, USS Ranger and USS Saratoga.

During this time, he learned gunnery and bombing tactics he would later use in fighting the Japanese.

When the war began, John had been serving aboard USS Enterprise [CV-6] as Air Officer before becoming Executive Officer. Early in the war, Enterprise  participated in the battles at Guadalcanal, the Battle of the Santa Cruz Islands, the Battle of the eastern Solomon Islands ands the Battle of Fennel Island. John Crommelin was instrumental in the Enterprise receiving The Presidential Unit Citation.

In the book written about the Enterprise , “Then there Was One” by Eugene Burns, the dedication reads: “To John Crommelin, a man affectionately known as the “pilot’s pilot” and The Spirit of the Big E, and to his breed of men…”.

RADM James Ramage [a Navy Captain during the war], had this to say about Crommelin and his time aboard the Enterprise from 1942-43, “During this time, four new Commanding Officers passed through the ship, and John provided the character, the underpinning of spirit, that saw the carrier through some trying times. The man was everywhere…..He was an excellent pilot and flew with squadrons when we operated ashore in the forward area. He was the soul of the ship, the very embodiment of the name Enterprise in a way that dramatized the character of this strong leader”.

Cdr. Crommelin was promoted to Captain and assigned to Commander, Carrier Division 24 as Chief of Staff and Aide aboard the carrier USS  Liscome Bay [CVE-56]. Crommelin became a legend aboard the Liscome Bay. On one occasion, during early morning flight operations, one of the squadron officers reported to Crommelin that “Some of the pilots are grumbling this morning. They say the flight deck is wet and slick and could be dangerous”. Letting loose a string of profanities, Crommelin left the bridge, donned his flight gear, and climbed into the cockpit of an F4F Wildcat. He was quickly catapulted into the air and proceeded to make several low passes around the carrier. Over his radio, Crommelin, using another string of profanities, ordered the air group commander to “Get those planes into the air”. The chastened pilots quickly manned their planes and began taking off.

The Liscome Bay was taking part in its first combat operation against the Japanese during the Makin Island invasion, off the Gilbert Islands in Nov 1943. On November 23,  a Japanese submarine let loose a string of torpedoes that struck the Liscome Bay a death blow. Escort carriers, like the Liscome Bay, were known for their notoriously thin hulls. One torpedo struck the ship near the bomb storage area, ripping the Liscome Bay in half, and killing 644 of her crew. The loss of 644 men was the deadliest carrier loss for the Navy in US Naval history. Among those lost was Adm. Henry Mullinnix, Commander of Carrier Division 24 and John Crommelin’s boss. Crommelin was the senior officer among the 272 men who survived the sinking. He had been taking a shower when the torpedo hit and barely made it topside, naked, before diving 45 feet into the water. He was rescued by a Navy destroyer.

Captain Crommelin spent several months recuperating from his burns and wounds before he was returned to duty. He was assigned to the staff of carrier Division 12 aboard the Gambier Bay [CVE-73]. In Aug 1944, he was sent to California as Director of Training for Fleet Air west Coast for the duration of the war. Ironically, Crommelin had only been gone from the Gambier Bay for two months when it was lost during the Battle of Samar.

In 1946, Crommelin assumed command of the carrier USS Saipan [CVL-48] , which trained pilots out of Pensacola from 1946-7. After that he attended the Naval War College in Newport, RI before being assigned to the Office of The Joint Chiefs of Staff in Washington, DC. There, he was involved in what came to be called The Revolt of the Admirals, when several Naval personnel spoke out in opposition to the Defense Department’s efforts to scuttle Naval air power, in favor of a larger Air Force.  Adm. Forrest P Sherman, Chief of Naval Operations [CNO], relieved Crommelin of his duties in Washington and gave him a “letter of reprimand”, essentially ending his Navy career.

In “Tailhook Magazine, RADM James Ramage said this of Capt. John Crommelin,  “John Crommelin  played a key role in the 1949 struggle to save Naval Aviation. In placing his convictions before his career, Crommelin was forced into retirement as a result of his outspoken support of the carriers in a page of history known as “The Revolt of the Admirals”. None who know him ever heard him express any regret for his courage in the face of overwhelming odds – he knew what must be done and he gave it his best shot regardless of the cost to him personally”.

John Crommelin retired in 1950 and was promoted to Rear Admiral [RADM]. Crommelin had married Lillian E Landis in 1930. She died in 1991 at their home near Montgomey, Al. John followed her 5 years later in 1996, at the age of 94. He was survived by one brother, Navy Captain Quentin Crommelin, two daughters, six grandchildren and two great grandchildren.

Memorial Day is about remembering the fallen