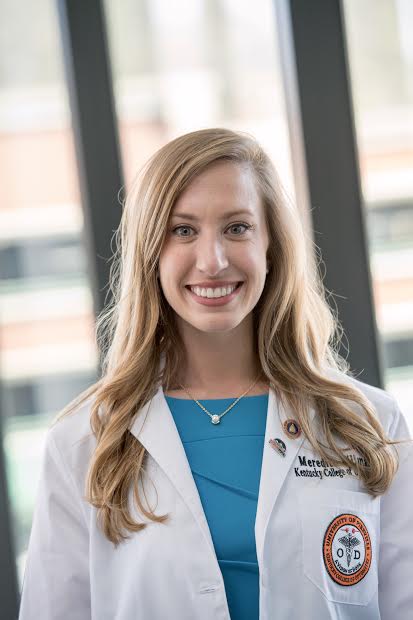 Andalusia High School alumna Meredith Tillman’s dream is coming true as she comes back to her hometown to work with her father as an optometrist.

There will now be two Dr. Tillmans in the locally owned business.

Tillman recently graduated from Optometry school at the Kentucky College of Optometry and has always known that she wanted to be an Optometrist since about the eighth grade.

“I think I really knew I wanted to be an Optometrist in about 8th grade,” Tillman said. “My dad’s office has always been my second home. From getting dropped off there every afternoon on the brown dot bus in elementary school to working in the summers in high school, the love of optometry and helping people see really grew on me.”

“I remember a patient coming right back in the office after picking up their new glasses and being so excited because they could see the leaves on the trees outside,” Tillman said. “That really stuck with me. I love that my patients will be able to see an immediate improvement in their vision and lives like this and being the one that gets to help them do that makes me so excited to go to work every day. Growing up in and around the profession was definitely a plus as I was able to really see how the profession would be and get a grasp on all of the ins and outs.  I think I knew at that point in my life because I was also old enough to realize how important optometry is and how many different medical conditions can be diagnosed directly from an eye exam, “

“I will be helping out at Tillman Family Eye Care this summer before officially joining the practice later in the year,” Tillman said. “I am excited to bring some new dry eye services to the practice and can’t wait to see the people of Covington County in my exam chair.”

Before becoming a doctor Tillman went to the University of Alabama after graduating high school at AHS. Successfully she earned her bachelor’s degree in psychology.

Shortly after completing her journey in Tuscaloosa, AL she hit the roads and moved to the mountains in Kentucky. Tillman had virtual graduation on May 2, 2020 due to COVID-19. With no time to waste and eyes to be seen Tillman came back to Andalusia to help the community she loves.

Looking back, Tillman remembers missing her family and friends being very challenging while going through Optometry school.

“I attended Optometry school at the Kentucky College of Optometry in Pikeville, KY, which is a small town in the Appalachian Mountains,” Tillman said. “I would say the most challenging part about Optometry school in the beginning of the four years was being so far away from my family and friends. I was nervous about moving that far away but was ready for a new adventure, and I wouldn’t change a thing.  Family and friends visited as much as possible, and I gained new family in the sweet friendships I made in school.”

Tillman said the course and load work was definitely the biggest challenge.

“I lived and breathed optometry, and spent the better part of four years in our beautiful school that is tucked into the side of a mountain,” Tillman said.

Tillman is looking forward to being able to start her career. She is passionate about getting to work with her dad in Andalusia.

“I am definitely looking forward to finally being able to start my career,” Tillman said.  “What makes it even better is that I get to do that with my Dad here in Andalusia and see all of the sweet faces that I have grown up with and around my whole life.”

Tillman has worked with her dad during high school and has looked forward to the return since.

“I was able to work at Tillman Family Eye Care during high school and I saw first hand how gratifying it is to help someone see the world better—especially the sweet kiddos that come in and get their first pair of glasses,” Tillman said. “You would be shocked how many parents don’t realize that their children aren’t seeing the world as clearly as they could be because it’s hard for young children with vision issues to express that to them when blurry vision is all they have ever known. This is just one reason it’s so important to bring your kids in at a young age to have their eyes checked.”

Meredith is the daughter of Bill and Sherry Tillman.