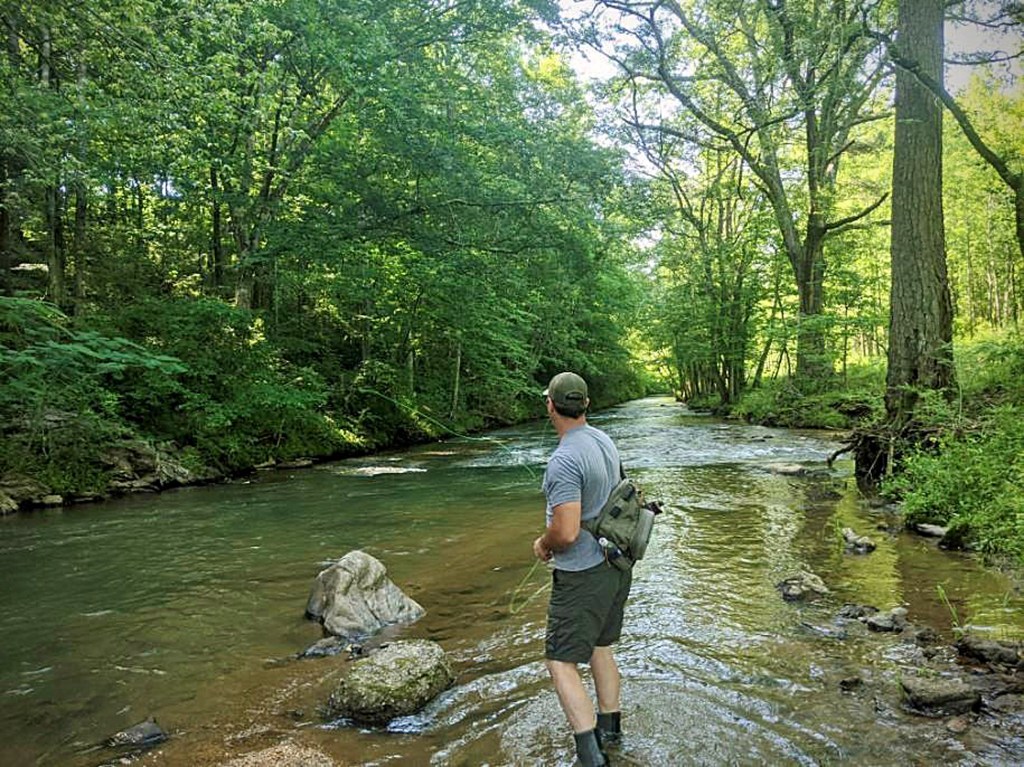 BY DAVID RAINER
Alabama Department of Conservation and Natural Resources

When the Scoggins brothers accept a challenge, there’s no turning back.

The firefighter brothers, Kevin at Hueytown and Steven at Hoover, revert to their roots to decompress from the stressful life as first responders. They find their solace casting flies in the many beautiful streams and creeks that crisscross the state. Native to those drainages is a fish that is the object of their affection and challenge – the redeye bass.

“Kevin and I grew up about 10 minutes through the woods from a small creek in Jefferson County,” said Steven, the eldest of the pair at 46. “We fished small creeks our whole life, and it’s pretty much molded us. Years later, we got into fly fishing. We both watched A River Runs Through It, and it weighed on our minds that we really wanted to try that. We bought a couple of fly rods from Riverside Fly Shop outside Jasper.”

Steven said he started catching fish in the streams that he regularly visited, but he wasn’t sure what he was catching. His research indicated they might be redeye bass. The more research he did, the more he decided to focus on redeyes and the streams and rivers they inhabit. He also discovered that each drainage has a different species of redeye.

“I really started searching out those streams with redeyes,” he said. “When my son, Kaden, got old enough to go with me in 2013 or 2014, we started going to these streams. We went to the Warrior River drainage.

“This was before redeye fishing got popular. I remember when Kaden and I caught our first redeyes on a fly. We doubled up, and I remarked at the time that this was the hardest-fighting small fish I’ve ever seen in my life. They’re just so strong. My love for them grew out of that.”

Lewis, Drew Morgan and Jonathan Kelly formed the Redeye Fly Fishing Group and created the Redeye Slam. The Scoggins were all in.

Fisheries biologists recognize seven known species of redeyes in the South. Alabama has four redeyes named after their respective drainages and shares one with Georgia, which has two other distinct redeye species. To complete the Redeye Slam, anglers must catch each redeye species in the Mobile Basin within a calendar year. The Redeye Grand Slam requires anglers to catch all seven species within a calendar year.

The redeye species endemic to Alabama are the Warrior, the Cahaba, the Tallapoosa, the Coosa and the Chattahoochee, shared with Georgia, which also has the Bartram and the Altamaha.

Steven said between 70 and 80 people signed up for the Grand Slam challenge, but only a few people managed to accomplish it. The Scoggins brothers were the third and fourth anglers to achieve the Grand Slam.

“Kevin and I do all these adventures together,” Steven said. “The Grand Slam was a very lofty goal. In 2018, when we did it, we traveled about 2,200 miles and went through untold counties and towns we’d never seen. You have to do tons and tons of research. It’s about logistics. You kind of know where they live, but you’re on your own. We were really tickled when we got it done.”

It took the brothers from March to October to catch all seven species. But that left them without a challenge, so they stepped it up a notch.

They decided to try to catch all four Mobile Basin species in one day.

“Nobody had ever done that before,” Steven said. “Most people didn’t think it was possible, but over the years of fishing for them, we kind of felt like we knew where the different species were. When we were doing the Grand Slam, I had caught two, the Coosa and the Tallapoosa, in one day and decided to try it.”

That effort in 2018 came up one species short because of a thunderstorm and fatigue. Steven tried again in 2019 but only managed to catch two species that day.

The Scoggins brothers doubled down on their logistics and recently made their “third time’s the charm” redeye trip.

“This was all done wading,” Steven said. “We’re targeting these backcountry streams. It’s really the most beautiful parts of Alabama you’ve ever seen. What we found out is that if you find rhododendrons and mountain laurels, you can find redeye bass. The moniker for redeye bass is the Bama brook trout because they share similar locations as brook trout in the Appalachian Mountains.”

The Scoggins brothers mapped out the straightest path possible to the different species, starting with the drainage that was the least familiar.

“We started in Tallapoosa drainage,” Steven said. “Kevin caught a fish at 8:30, but I didn’t catch my fish until about 9:15. Second was a drive to the Coosa River drainage. It was an hour’s drive and an extremely tough hike to the stream. It took about three-quarters of a mile of fishing for us both to get our fish. That was about 11:30. We looked at each other and said, ‘We’re going to be able to do this today.’”

Next up was a trip to the upper reaches of the Cahaba River north of Trussville. By 3:15, they both had Cahaba redeyes.

“This is where the story takes a downturn,” Steven said. “We were within reach and also confident, overly confident. The last one was the Warrior River drainage. We reached an area we know like the backs of our hands about 4:30.”

The brothers waded into the stream but found no evidence that any redeyes existed in that stretch of water. They tried several patterns and couldn’t get a fish to even look at one of their flies.

“We fished for two solid hours without a single hit,” Steven said. “I was a nervous wreck. I was almost nauseated. At 6:30, I finally caught the first fish in a hole I knew held them. I got Kevin on the radio and told him to come fish this hole. He takes about a 40-minute trek to get to where I was. He starts casting. Absolutely nothing. We go to a hole with a beautiful rock wall. He fishes the whole wall as hard as he can. Nothing.

“We were exhausted by this time. The sun is starting to go down, and he’s thinking we’re not going to make it. The fish weren’t hitting anything.”

The Scoggins brothers use two main patterns to catch redeyes. One is the traditional topwater popper called a Booglebug in No. 8 or No. 10 and the Wooly Bugger.

“You can catch a redeye on any color as long as it’s yellow,” said Steven. “The Wooly Bugger is the quintessential fly used all over the world.”

Kevin, desperate at that point, changed flies again and still caught nothing. The brothers then headed back to the hole where Steven caught his fish.

“I said we needed to go to that hole one last time,” Steven said. “I knew fish were there. He said, ‘I’m exhausted. I’m going to cast four or five more times.’”

Despite the unbelievable accomplishment, the brothers were too tired to do much celebrating.

“I had been up since 4:45 that morning,” Steven said. “We’d driven almost 400 miles across 11 counties. It was blood, sweat and tears. It all came down to a fish on our home waters we knew like the backs of our hands, and it took 3½ hours for both of us to catch a fish. That fly Kevin caught his fish on was one I got out of the dollar bin at Deep South Outfitters in Birmingham. Had I not had that pattern, we wouldn’t have finished the Slam.

“It was an epic finish to an epic day.”

Drew Morgan, who guides redeye trips on the Tallapoosa River with East Alabama Fly Fishing, said the Scoggins brothers are the first to complete the Slam in a single day.

“It’s quite a feat,” Morgan said. “Many have been trying, but Steve and Kevin are the first to do it.”

“We fly fish in North Carolina, Wyoming and Montana, but this place will always be our fly-fishing home,” Steven said. “I will always love catching redeye more than any other species. Our jobs are stressful. They’re physically and mentally demanding. This gives us a release like no other. To get into a backcountry stream with the rhododendrons and mountain laurels blooming and catch these beautiful fish, it just resets us to zero both mentally and physically.

“All we want to do now is catch and save our endemic species. And we want to let everybody know there is a beautiful fish you can catch that is exclusively found in Alabama.”