“Duty, Courage, Sacrifice – Torpedo Squadron 8 and the Battle of Midway” 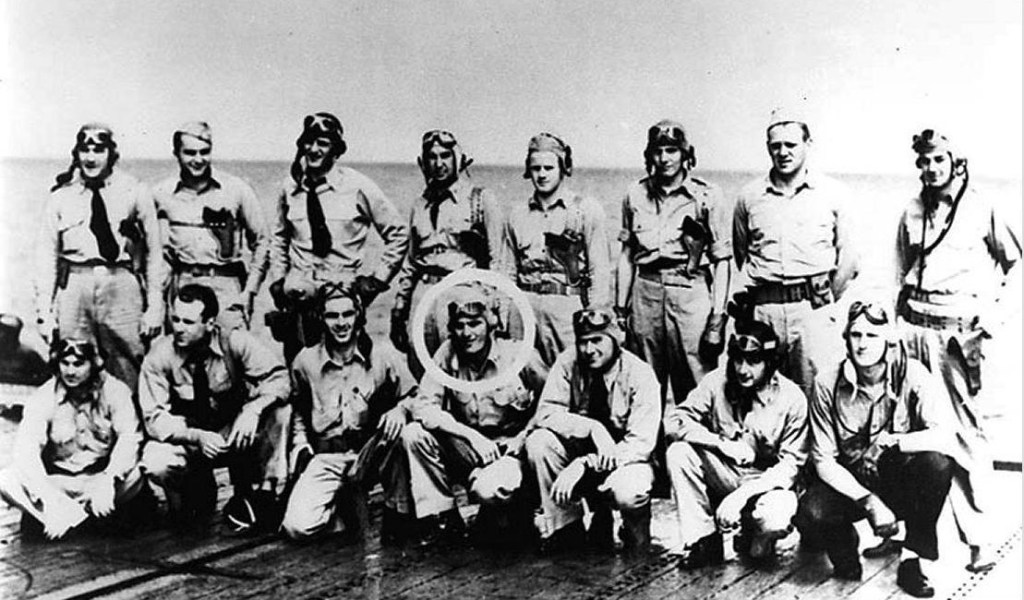 This is a followup article on the Battle of Midway. Most people aren’t familiar with the WW II story of Torpedo Squadron 8. Their extraordinary courage and sacrifice defines what ourcountry routinely required of its young soldiers and sailors. It was written for Father’s Day weekend to honor those young men who never returned to their children or were never given the chance to become fathers.

Some 78 years ago [Jun 3, 1942], 30 brave men undertook a task, so incredibly courageous, that their actions on that day will be forever memorialized in US Naval history. On that day, the men from USS Hornet’s Torpedo Squadron 8, without fighter protection, carried out an attack against the vastly superior naval forces of Japan. That attack cost the lives of 29 of the 30 men in the squadron. This is their story.

Torpedo Squadron 8 was created in 1941 as a part of the air group for the new carrier, USS Hornet [CV-8]. The new commander of VT-8 was Lcdr. John C Waldron, a seasoned naval aviator from Ft. Pierre, SD. Waldron had graduated from the Naval Academy in 1924 and had completed flight training in 1927. The new executive officer for VT-8 was Lt. Harold Larsen.

At the beginning of the squadron’s training, Waldron told Larsen, “We’re getting fresh, green kids. We’ve got to make fighting men out of them and we may not have much time”.

Waldron set about training the new squadron in the classroom as well as in the air. The plane given to VT-8 was the TBD Devastator, once considered a frontline torpedo plane but obsolete by the time the Pacific was started. There were two big drawbacks to the TBD – it had light armament and had a slow approach speed when making a torpedo attack. The squadron was slated to receive the new Grumman TBF Avenger at about the time of Hornet’s departure from Norfolk, VA. Twenty one new TBFs arrived in Mar 1942, just as Hornet was preparing to leave for the Pacific theater. Larsen was asked to stay behind in Norfolk with some of the squadron to begin training in the new Avengers. Hornet departed with Waldron, who took with him, those pilots he deemed most experienced.

Hornet’s first taste of combat came when she was given the mission of transporting  Lt.Col. James Doolittle’s  squadron of Army Air Corps B-25s for their raid against Japan in Apr 1942. Waldron’s torpedo planes saw no action during this voyage. Because of the timing of the Doolittle Raid, Hornet did not participate in the Battle of the Coral Sea , which was the first carrier battle in history.

In  May 1942, US Naval intelligence in Honolulu learned that the Imperial Japanese Navy  was planning an attack on the US military base on Midway Island. On May 28, Hornet along with the USS Enterprise[CV-6] , weighed anchor from Pearl Harbor and headed for an imaginary point designated as “Point Luck”, where it hoped to locate the Japanese fleet. The ship’s departure came just before VT-8 would have received the new TBF Avengers which had already left the states. Lcdr. Waldron’s worst fear was confirmed when they departed with the old TBD Devastators. To make matters worse, the new Air Group Commander, Cdr. Stanhope Ring, was newly appointed from an administrative position. His inexperience cost him the respect of many of Hornet’s pilots.

The upcoming battle called for a well coordinated attack among the fighters, dive bombers and torpedo planes. Cdr. Ring wanted his aircraft to attack, all together but his plan differed from the successful tactics used in the Battle of the Coral Sea . He instructed his dive bomber pilots to fly high with fighter plane escorts  in hopes of enticing the Japanese Zeroes to come up and fight. . He told the torpedo planes to attack from almost wave level. Lcdr. Waldron argued against Ring’s plan, stating that his torpedo planes needed fighter escorts and would be vulnerable with their slow speed torpedo attacks. Cdr. Ring insisted upon the disposition of the aircraft with the fighters high above and the torpedo planes without escorts.

On the morning of Jun 3, the Japanese carriers were sighted some 200 miles northwest of Midway. They had already launched their planes to attack Midway itself. Hornet’s pilots prepared to launch an attack while many of the enemy aircraft were away from their carriers. In the ready room, Lcdr. Waldron briefed his men:

“My greatest hope is that we encounter a favorable tactical situation, but

if we don’t, and the worst comes to the worst, I want each of you to do his

utmost to destroy our enemies. If there is only one plane left to make a final

run-in, I want that man to go in and get a hit. May God be with us all. Good luck,

happy landings and give ‘em hell.” Finally Waldron said, “This is it. It will be a

and I hope, a glorious event”

Before planes were launched for the attack, all squadron commanders were called to the bridge for a briefing from the Task Force Commander, Adm. Marc Mitscher. Waldron made one last plea to have fighter escort for his torpedo planes. The fighter squadron commander, Lcdr. Pat Mitchell agreed with Waldron, but to no avail. Cdr. Ring’s plan would be followed. Finally, at 7:02am, the first planes launched. Some 30 minutes later, all aircraft were airborne – there were 35 dive bombers, 15 torpedo planes and 10 fighters. At the same time Hornet was launching planes, strike groups from the nearby Yorktown and Enterprise were also launching.

As Ring took his dive bombers and fighters westward, climbing upward for their attack from high altitude,  Waldron and his torpedo bombers headed in a slightly different direction, at low altitude. Before long, the Devastators were alone, and would not be a part of a coordinated attack. The squadron flew in two divisions, with one division having four sections of two planes, and the other having two sections of two planes and one section of three – a total of 15 planes in all. The last section of three planes had Ensign George Gay flying last or “tail end Charlie” as it was called.

While Ring’s planes were headed toward the projected position of the Japanese carriers, the Japanese commander, Admiral Nagumo, decided to turn to the northeast, after one of his search planes reported contact with Yorktown . That turn placed Nagumo’s carriers squarely in the path of Waldron and VT-8. Not one of Waldron’s pilots had any combat experience.

The carriers were sighted by Waldron’s squadron at about 9:25am. Waldron immediately radioed the position of the Japanese ships and asked for assistance in a coordinated attack. None of the other squadrons answered his call, as they had turned south and were not in radio range. Realizing that the only option left was to attack, Waldron signaled his planes to form an attack formation, 60 feet above water.

They headed for the centrally located carrier, some 16,000 yards distant. Suddenly the torpedo planes were swarmed by some 30 Japanese Zeroes. One Devastator went down and was quickly followed by several more. Lcdr. Waldron’s last transmission was picked up by a radioman several miles away, “Watch those fighters!….My two wingmen are going into the water…”.

Shortly after that, Waldron’s plane was hit, and it dropped toward the ocean with its left fuel tank ruptured and on fire. He was last seen, attempting to stand up and bail out as his plane plunged downward. His plane crashed into the water, burned briefly, and disappeared. Besides the gun fire from the Zeroes, the antiaircraft fire from the screening ships was wreaking havoc on the remaining planes of Vt-8. In just a matter of minutes, Ensign George Gay was the only plane left to finish the attack. Just as he started his approach, Gay heard his rear gunner say that he was hit. Glancing back, Gay realized his back seat gunner was dead. Still, he pressed on with his attack through heavy antiaircraft fire and attacks by as many as 5 Zeroes. He dropped his torpedo at a range of 800 yards and flew through the hail of bullets directly over the carrier. He thought he heard an explosion but no carrier was hit during the attack. Gay’s Devastator was then attacked by another 5 or 6 Zeroes. He was wounded by shell fragments and hit in the left arm by a bullet. With his controls shot up, Gay made a controlled crash landing about a quarter mile from the carrier. Gay was able to make a frantic exit from the cockpit, just before his plane disappeared beneath the waves He found himself floating among several items from the plane including his uninflated life raft and a small black cushion. Gay decided to inflate his life vest but not the life raft. He had heard stories about Japanese pilots machine gunning downed pilots in life rafts. Trying to remain hidden under the black cushion, Gay assessed his injuries. He was able to remove the bullet from his arm and place it in his mouth for safe keeping. Before long the bullet was lost in the excitement of watching his fellow aviators wreak havoc among the Japanese carriers. With a ringside seat, Gay watched as US dive bombers dropped their bombs on the pride of the Japanese fleet. Two carriers, within Gay’s view, took direct hits which were followed by massive explosions and fires. Before the day was over, Japan would lose 4 of its best aircraft carriers. Late that day, a Navy PBY seaplane spotted Gay, landed nearby and picked him up. He eventually was taken to Pearl Harbor for recuperation. In the process, he lost 24 lbs.

It has been documented that VT-8 did no damage to the Japanese carriers they attacked. However, an after battle assessment concluded that the attack by VT-8 proved an invaluable distraction, causing the Japanese fighters to leave their high altitude combat air patrols to defend their carriers against torpedo attack. The subsequent successful attacks by the dive bombers was met with little opposition before they commenced their attacks. An important reminder about those dive bomber pilots came out in a 1974 interview of George Gay. He noted that most of them were also flying their first combat missions that day.

The heroic role of Torpedo Squadron 8 during the Battle of Midway cannot be overstated. Ironically, each of the crew of VT-8 were photographed in color that morning before they left the Hornet . Famed Hollywood director, John Ford, who was a member of the Navy Reserve, was on Midway to film the expected battle.  He had boarded Hornet the morning of Jun 3 to film the air crews before they launched. Later that year, the Navy released The Battle of Midway , a color documentary directed by John Ford. Ford was so moved after having met and talked with each member of VT-8 just hours before their deaths, that he made a short film Torpedo Squadron 8 , just for the families of those brave airmen.. That film can be found today on the internet by googling “John Ford and Midway”. Duty, Courage and Sacrifice – that is the legacy of Torpedo Squadron 8. 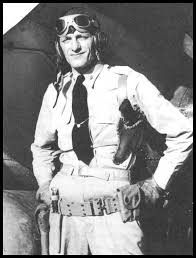 The Battle of Midway – – Turning Point in…