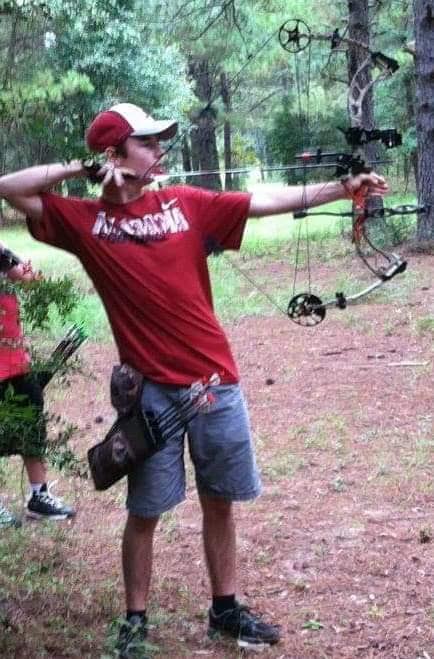 During his short life of 24 years, he touched the hearts of many who want to honor his memory. Wyatt’s father, Russell Myers, thought back to his memories of Wyatt. He explained that Wyatt’s disease tried to slow him down, but he persisted.

“Wyatt loved music. He was a huge Alabama football fan. He never left the house without his Alabama cap. He loved archery, hunting, riding four-wheelers and pretty much anything outdoors. He loved his video games. He was either inside playing his games or outside doing something. He loved reading. I don’t know how many books he read in his life. Even though he was skinny, he loved food, especially chocolate. If he had a cake, it had to be chocolate and with chocolate icing, too. He loved it.” Wyatt’s stepmother, Adele Myers, was in awe of his ability to speak to everyone with respect and joy.

“Wyatt never met a stranger,” Adele said. “He treated everyone the same, no matter how old or young they were.”

“He was always smiling, whether he was having a good or bad day,” Barlow said.

Barlow recalled Wyatt greeting her every morning at school.

“I don’t know how he was always one of the first ones at school in the mornings, but he was and he always did his half-wave and said good morning,” Barlow said. “Wyatt was such a kindhearted person. He was always involved and he never stuck with just one friend group. He floated around and made sure to see everyone.”

Wyatt went out of his way to be a helping hand for his peers and teachers while in school, according to Barlow.

“He was always helpful to teachers in the classroom and he would offer to help them,” Barlow said. “He was such a volunteer person.”

Of all of the hobbies Wyatt had during high school, Barlow remembers his love for reading the most.

“He was always reading and he always had the highest AR points,” Barlow said. “He loved so many types of books, but I remember him reading Harry Potter and Lord of the Rings.”

Barlow remembered a specific memory with Wyatt that she likes to look back on. Even as young kids, Wyatt was always selfless, according to Barlow.

“In seventh or eighth grade, we were in our history class with Mr. McGlaun. Wyatt finished his paper early, and I was just being lazy and asked for his paper. He handed it to me and then Mr. McGlaun asked him if he had finished his paper yet. We were both so nervous. Wyatt said no to cover for me, and then Mr. McGlaun told me to bring Wyatt’s paper to him. We both made a zero on the assignment and I felt horrible about it,” Barlow said. “So, I offered to do Wyatt’s math homework for a week. It was a kind of funny story, but that’s the type of person he was. He was super sweet and super kind.”

Despite Huntington’s Disease affecting his life, his family and friends said Wyatt led his own as a great example of strength and kindness. Many of Wyatt’s classmates did not know what he was going through, and his family wants to educate those who will listen on what the disease is. Wyatt’s aunt, Kerry Strickland, wants to raise awareness about Huntington’s disease and how it has affected their family.

Huntington’s Disease is an inherited condition that causes nerve cells in the brain to break down over time. Strickland wants everyone to be aware of the disease because many people do not realize how many locals have died at the hand of Huntington’s.

“There’s a lot of people who don’t know anything about the disease and don’t understand what it is,” Strickland said. “Wyatt’s mom, his grandmother, and more of our family members had it. His grandmother passed away at 44, her sister and her two children also died in their 40s. This makes Wyatt the youngest of the family to suffer from this disease.”

Huntington’s is described as the worst disease by Strickland and it has affected her family deeply.

“Huntington’s disease is the worst one,” Strickland said. “With cancer, there are treatments for it or the cancer dies with you. With Huntington’s, it goes on and on through your family and there is no cure.”

Wyatt’s family wanted him to be properly taken care of, which led to them bringing him to Andalusia Manor four years ago.

“His family took care of him for years until they couldn’t anymore. He was the youngest person in Andalusia Manor,” Strickland said. “Wyatt was kind of like their baby.”

“His dad and stepmom took care of him for as long as they could. They would check him out on holidays and birthdays to get him outside and spend time with him,” Strickland said. “They made it as good as possible for him. They checked him out for Christmas, birthdays, and to spend time with family.”

His mom, Sonya Bennett, was also in Andalusia Manor before she passed away at age 36.

“Each child of someone who has the disease has a 50 percent chance of inheriting the gene,” Strickland said. “We knew he had a chance, but we didn’t know that he had it until he started showing symptoms around 14. That’s what they call Juvenile Huntington’s Disease.”

Strickland explained that Wyatt remained optimistic while battling the disease.

“Even when he was sick, he had a good attitude about everything,” Strickland said. “He had a lot of hobbies. He liked to play video games. A guy at the nursing home would come in there and play video games with him.”

Strickland taught Wyatt in the fourth grade and she said he was always such a smart kid.

“He loved to read. He had a high AR score. He’d read big books,” Strickland said. “Wyatt loved to hunt and fish. He competed in archery competitions. He did that a lot. We used to go and watch the competitions he was in. He was also elected prom king by his classmates in high school, which was sweet.”

Strickland has found comfort through support groups on Facebook with people all over the country. The groups give members access to other people who can relate and understand the aftermath of Huntington’s disease, said Strickland.

“There are several support groups on Facebook with people from all over the country,” Strickland said. “I posted about Wyatt and over 300 people who I didn’t know expressed their condolences. It’s helpful for people who are also going through it. I just know that he was loved and I hated that he had to deal with this. A lot of people didn’t know or understand what he was going through. It’s sad, but we are glad he isn’t suffering anymore.”