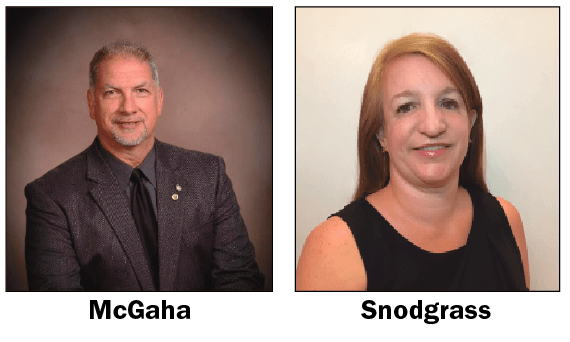 With the primary elections approaching, the Star-News asked candidates from the Covington County Commission District 4 runoff a series of questions on important issues regarding the county.

The candidates are Tommy McGaha and Stephanie Snodgrass.

McGaha: I believe the county commissioner still acts as the liaison between the citizens and the engineer’s office to have the issues brought forth by the citizens, mainly in the conditions of roads, taken care of.

Snodgrass: I think, for today, the role of a county commissioner is about the business of the county and about making decisions that affect every aspect of county business. Whereas, before the districts were the main concern for each commissioner, and they were responsible for the upkeep and maintenance of all roads and bridges within their specific district. So now we’ve transitioned many years ago to the unit system which puts the county engineer in charge of the roads and bridges from all of the county. So that really frees up the commissioners now to look at the big picture and to really focus on the day to day activity that makes a real impact on our citizens’ lives.

What experience do you have with developing and executing budgets and reading financial statements?

McGaha: I have been a branch manager of an electric distribution store where we had to manage our income and expenses on a monthly basis.

Snodgrass: For 20 years, I worked as a reporter covering county government and part of that responsibility was really digging into the meat and bones of budgets, specifically on a county government level and what it meant to the taxpayers because as we know, the bulk of the county’s revenue was funded through taxpayer dollars. Going one step further than that, I was also the publisher of a twice-weekly newspaper. I managed seven employees and we had an annual budget of over half a million dollars, so I really understand what it means to be responsible for everyone’s paycheck. I think that’s a unique experience and I think that taking all of that and combining it gives me a greater understanding of the entire budgeting process from start to finish, as it goes on paper, as it relates to the county departments, and as it relates to taxpayers.

What are your views on the county’s current level of public debt?

McGaha: I don’t have any views on it at this point. I don’t have it in front of me but I remember seeing it when it came out several months ago.

Snodgrass: If memory serves me right, I want to say that right now we are at about $15 million and we should have that paid off within the next five years. I think that is right, but again I am not privy to those exact numbers but I do know that many, many years ago the county had a significant amount of debt and the current administration plus previous administrations have worked very hard to reduce that number. If elected, I will absolutely continue that path because I’m not a fan of borrowing money at all. I believe we should work within our means. Now, granted, sometimes there are instances where we have to do that, especially when we’re looking at an economic development project on a very large scale. So, it’s like I tell everyone that at the end of the day the dollars have to make sense.

Are county taxes too high, about right or pleasantly low?

Snodgrass: First off, Alabama has one of the cheapest taxes across the U.S. So in that regard I would say we are just right, but when you drill down to a county level and you compare other areas to us, we are about even. When you go a little further down into that municipality level those are different rates throughout Covington County and I think when leaders pass those measures they were made for very specific purposes. So I guess my short answer would be that they are just right. I’m not in favor of raising taxes if that’s what the question was.

What do you see as the most pressing needs for infrastructure or capital projects in the county?

McGaha: Well seeing the physical size of our county and looking at the percentage that is improved or pave roads versus the unimproved or dirt roads. I think that one of the priorities is to make sure they are maintained by whatever level they are, like I said, unimproved or improved.

Snodgrass: High-speed Internet is the number one thing that I get hit with throughout the county that people see as a dire need and I have to agree with them. I mean, if you think about the way that we conduct business nowadays, and especially in light of a pandemic, everything has gone online. We are living in a technological age and for us here in Covington County, we really like the true infrastructure I think to be competitive on the next level. I see a number of complaints across social media and out in the community about our need for increased internet speeds and reliability and I think that is one of the most major categories that we have to work on.

What do you think should be done with the Arena?

McGaha: The county took the arena back over in September and it needs to be functional to try to generate as much revenue as it can to help pay it off, and I’m saying pay it off because I am under the impression (I have not looked at the financials) that there is still debt on it.

Snodgrass: I remember when the arena was constructed many, many years ago and it was a massive project and throughout the years, the economy and the community have taken its toll on that as a quality of life site. Over the last several years, a number of infrastructure improvements have been made within the facility and the property and I think those were needed and well deserved and over the last, I would say year, we’ve made some really significant strides on getting people inside of that arena and just a couple weekends ago we had two rodeos back to back and that’s pretty impressive. People have great things to say about our facility and really I think as time progresses we will be able to utilize that property for even more events.

If new resources were available, what one area of county services would you feel most needs additional resources? Also, is there one area that you feel gets too much money/resources?

McGaha: I’m gonna go back to road maintenance and improvement because of the amount of roads we do have because we have such a large physical county, but I also think the county employees should have adequate pay. A lot of times people see job openings for the county and they look into it and the hourly rate is so low they don’t want to move any further to get the job, and benefits as part of the package because a lot of times if it’s not what you’re taking home it’s hard to see the benefits of a good package with a job.

Without having the budget in front of me I cannot make an educated statement on that.

Snodgrass: Previous administrations have worked very hard to get our level of pay for county employees to a somewhat competitive level. I do believe that there are some areas for improvement in that and if we had a very large substantial amount of money, I believe in paying our people well and that’s where we should start first because when you invest in your people you invest in your community. Secondly, if I had to choose something it would go straight to debt. Like I said before, I am not a fan of debt and I do believe that we should pay ourselves first, and anytime you have an opportunity to eliminate that debt, we should take it.

What are the factors on which you will base your decision as a county commissioner?

McGaha: As a commissioner, and the way that the county is broken down to districts, I think your first priority is to listen to the constituents and the district that you represent, let them know that you do care about them and you are listening and you take their thoughts and concerns with you to make the decisions for the county as a whole.

Snodgrass: First off, common sense, but right behind that would be research. You have to do your homework when you are faced with decisions that can impact the lives of every person in the county. If you don’t do your homework, you’re not gonna score well on a test and it’s the same principle I think that can be applied to making decisions for the county.

Snodgrass: Well, as a reporter, I have very strong views about open data and transparency. As a reporter, it was our job to make sure that the public was informed. I took my job very seriously and as a commissioner, nothing would change. I really believe we are elected by the people of this county and we should be held responsible by the people of this county. You can call me any day of the week and if I don’t know the answer, I will find it for you. What kinds of information should be made public? Unfortunately, that is not up to me as a county commissioner to

determine. There’s a pretty set rule of what is public information or what is not. I would hope that we would just continue to follow the protocols that have already been established. I would like to see a stronger line of communication from the commission to the public. I really noticed that during the pandemic we had different sources of information coming from different places and it made it very difficult for our citizens to actually know what was happening in our county government, and if elected I would really hope to streamline that process a little bit more. Plus, we have employees that are doing great and wonderful things at their jobs and we need to highlight that and we also need to highlight all the great and wonderful things in our county, too.

What’s the biggest issue facing the county in the next four years?

McGaha: I think one of the biggest things that are facing the county in the next four years is gonna be the same thing that faces the county every four years, which is maintaining a budget and staying within the confines of that budget, as well as being able to stretch the tax dollars as far as you can, all while trying to generate more revenue through new businesses coming in or existing businesses expanding their role in the county to provide services and it would generate more revenue.

Snodgrass: I would say the loss of revenue from the pandemic, the unemployment issues that we’re facing, and all of the problems that go along with that. We are still very early in the process in that we don’t know exactly how much of a financial hit that the county has taken as a result of a loss of sales tax income and that sort of thing, so I think going into the next four years we are really going to have to be mindful of revenue and finding creative ways to maybe replace some of what we’ve lost, to generate new revenue, and really keep an eye on our expenditures. It’s no different than your household budget. You’ve got to make sure that you have more coming in than you’ve got coming out and I think that’s going to be the biggest issue over the next four years is making sure we stay on top of that.

The runoff election is scheduled for Tue., July 14.