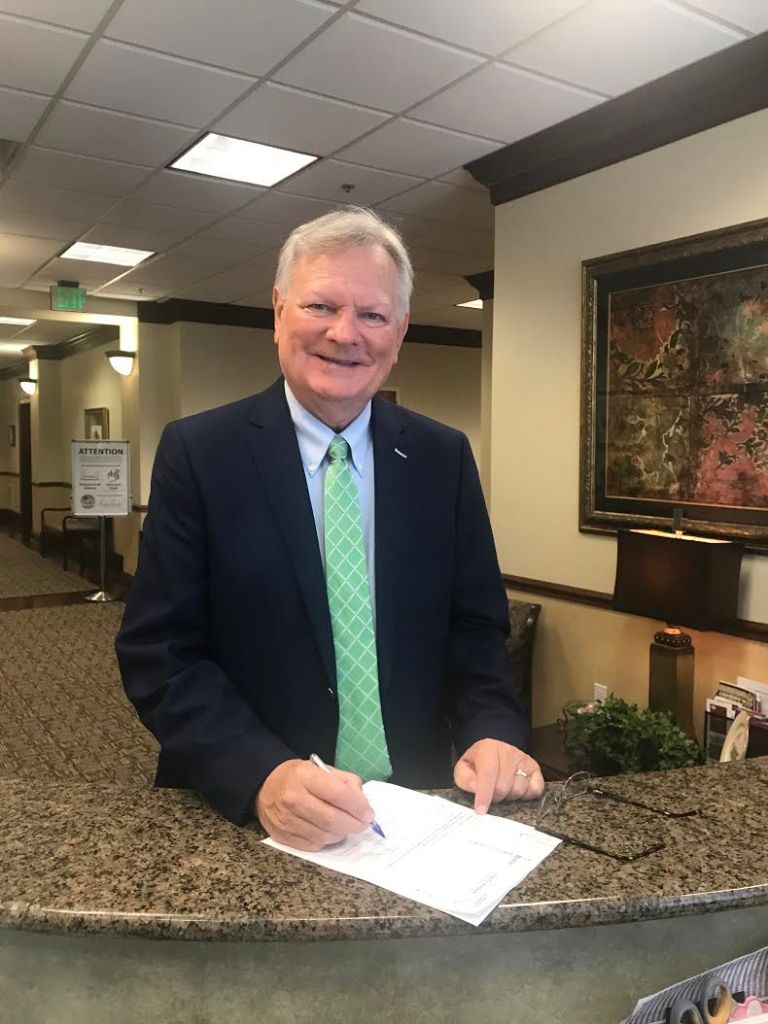 Mayor Earl Johnson announced Tuesday he has qualified to seek re-election in municipal elections this summer.

“When I first ran for this office, I did so with the intention of making Andalusia a better place,” Johnson said. “We’ve worked very hard and made major strides, but we’re not done. In qualifying for election, I’m seeking an extension of the contract I made with Andalusia’s citizens to make it the best place possible for them and their children.”

Johnson first took office in 2000 and has served four full terms. He pointed to improvements in the city’s infrastructure, the beautification and redevelopment of the downtown area, and efforts to make Andalusia as business-friendly as possible, leading to major investments in local businesses, as evidence of his accomplishments. The work done in all of these areas, coupled with a conservative fiscal policy, has put the city in a solid and envied financial position, he said.

During the past four years, the City of Andalusia Utilities completed a major overhaul of the sewerage and stormwater drainage systems in the city’s north basin. Now, a similar $7 million project is under way in the south basin.

“The infiltration of stormwater into original sewerage lines greatly increases the City Utilities’ costs at our water treatment plant,” Johnson said, “By improving these lines, we are extending the life of our treatment facility and reducing our daily costs.”

In the current term, the city completed the renovation of South Three Notch Street, which included the installation of sidewalks from downtown to the bypass. A second sidewalk project connecting Lindsey Bridge Road to Johnson Park also was completed last year. Those projects, along with the Prestwood Bridge Road and River Falls Streets sidewalk projects completed in the last term, have made Andalusia one of the state’s most walkable small cities.

In addition to the sewerage projects, the city has completed numerous paving projects, funding $829,000 in resurfacing projects in 2019 alone, he said.

Last year, the City helped Andalusia City Schools achieve a long-held goal of offering one-to-one electronic devices in the classroom. The tablets and laptops were made possible thanks to funding from the 2013 education sales tax, the mayor said.  Since the sales tax was adopted in July of 2013, the city has transferred more than $6.1 million in new revenue to Andalusia City Schools for new academic programs and capital projects.

City education sales tax dollars, along with major private investments from local businesses and individuals, led to a major overhaul of the Andalusia High School stadium and auditorium in 2019. Johnson said that is just one of the ways his administration has used public-private partnerships to rebuild Andalusia.

“This is the model we used when Big Mike’s located in Andalusia, and when we upgraded the Clark Theatres,” Johnson said. “We also have announced partnerships for the development of the old Coca-Cola building on Church Street and the Opera House on South Three Notch. With the redevelopment of The Opera House, or McArtan Building, we will finally have some upscale housing available in the downtown area.”

The Opera House partnership with Andy Gibson and Draftstone Properties followed an announcement in early March that the City of Andalusia had acquired 143,000 square feet of space in mostly-vacant, historic downtown buildings, as well as approximately six acres of land.

Johnson said that in addition to the Opera House, the acquisition includes some of Andalusia’s most iconic buildings, including the Prestwood Building, which dates back to 1904; buildings on Central Street;  the South Cotton Street buildings once known as The Bottom;  and the beautiful L&N Depot built in about 1926.  The mayor and other City officials have been working with Concordia, a design firm in New Orleans that specializes in community development, to create a plan for the downtown area.

The City also has a public-private partnership with Gatewood and Sons to develop garden district housing on Church Street, Johnson said.

In the past two years, Shaw Industries has invested more than a $300 million in the local plant.

“Shaw’s leadership has assured us that this investment will secure those jobs in Andalusia for another generation,” Johnson said.

Two new industries also have located in the South Alabama Airport Industrial Park in the past 18 months, he said.

Gulf Air Group located a new division, Covington Maintenance Center, in the airport’s twin hangars at the airport. The company expects to hire 21 to 22 full-time employees for the local facility.

Dyncorp has more than 50 employees in its local facility, and hopes to grow its local workforce to 75, Johnson said. The company has a $152 million contract from the Naval Air Systems Command to provide logistics support services and material for the maintenance of TH-57 aircraft. Some of that maintenance work is done in Andalusia.

“We also have welcomed Jack’s Restaurant and Popeye’s Chicken,” the mayor said. “We have worked with Shaun and Michael Jackson to redevelop the Covington Mall, and are excited about their new Firehouse Subs opening this summer. They also have several new retailers who plan to locate in the mall who would have opened this summer if they had not been delayed by the pandemic.”

New apartments also should be available by the fall, he said.

“Invictus Development will open Appaloosa Run, a new 56-unit apartment complex this fall,” Johnson said. “This is something we’ve worked on for a long time.”

Another new business drawing visitors to Andalusia is The Oaks, a family RV park and campground on Brooklyn Road. The 32-acre park offers concrete and gravel RV pads; RV rentals; family cabins; glamping tents; and primitive camping. The amenities include fishing, a bath house with private rooms, a children’s playground complete with zip line, and golf cart rentals for getting back and forth to the spring-fed pond.

The City also has partnered with the Andalusia Area Chamber of Commerce to present Candyland, which drew 73,000 visits in 2019 and garnered national publicity, and July Jamz, a summer concert series.

The City’s most recent audit, completed by Rabren, Odom, Pierce and Hayes, P.C., showed the city increased its net position by $1.6 million in fiscal year 2019. It was the fifth consecutive year that the net position had increased.

At the end of FY 2019, the City had a cash balance of $10.5 million, and 58 percent of the balance was unrestricted funds, meaning it was not pledged to specific projects or debts.

While improving its cash position, the city also made payments of $1.9 million on its long-term debt in fiscal year 2019, bringing the total debt reduction for the current quadrennium to $5,674,319.

“Because of the conservative policy we’ve used, and this administration’s deliberate management of the City’s finances, we have earned an A+ bond rating from Standard and Poor’s,” the mayor said.

“It is an exciting time to be in Andalusia,” Johnson said. “I humbly ask for your support in this summer’s election so that we can complete the projects we have under way, and continue to build and support this beautiful city we all love so much.”